The Francois Peron National Park is part of the Shark Bay World Heritage Site as shown on the map below. We figured the best way to see it all would be to take one of the tour flights over the entire area, so we did. The black line represents the approximate flight path for our 90-minute flight. We started at the airport just east of Denham and did a clockwise path around the area. 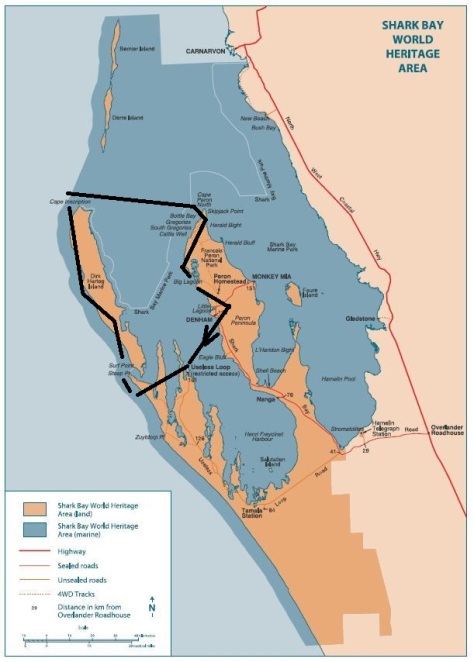 This was our plane for the tour. Our pilot was a young lady who had only been flying there a few months. We found out during the flight that she flew not only tours, but flew workers, parts and guests to the remote dirt strips along our flight path on nearby peninsulas and islands. 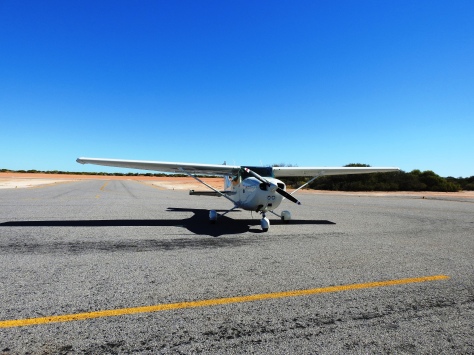 Pam, Eve and I jammed into the aircraft with our pilot and we were off. Pam caught this shot of our shadow as we took off on our flight. 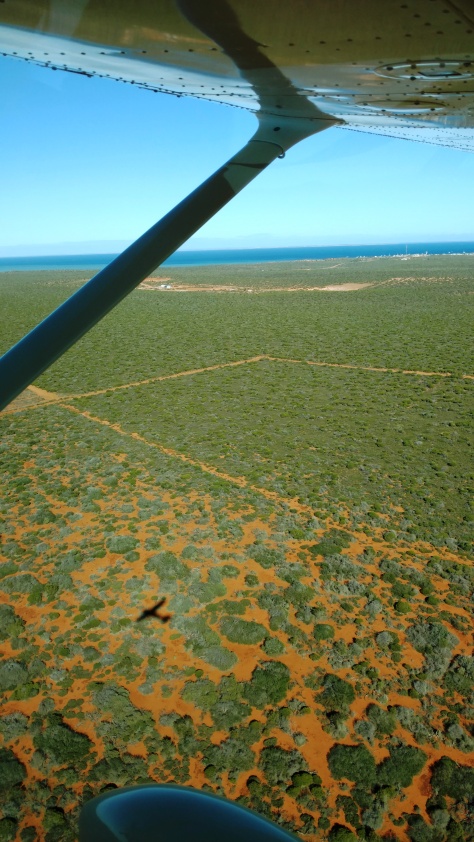 We passed over the town of Denham as we headed out over the bay. 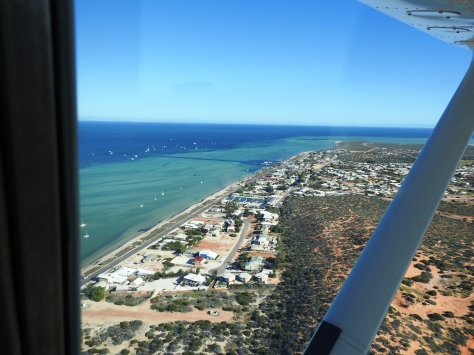 The bays are filled with sea grass and dugongs, the Australian version of the manatee. We spotted a couple dugongs from the air but did not get a picture of one. 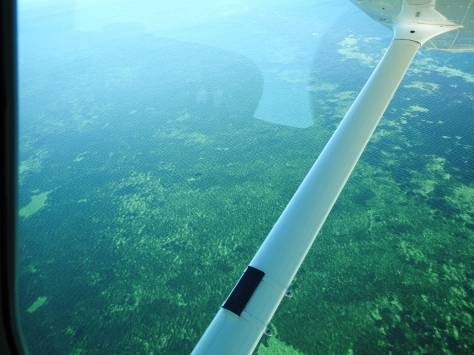 As we approached the Carrarang Peninsula and the town of Useless Loop, the salt flats came into view. Huge piles of salt were being loaded onto tankers from the dock. If you ever buy Australian salt, there is a good chance it came from here. A dirt strip on the other side of this site is one that our pilot flew workers and part into on a regular basis. 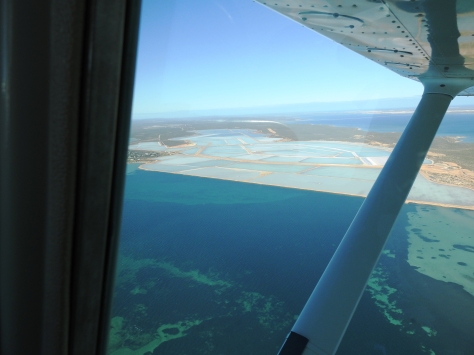 The water in the bay is shallow, but there are deeper channels that allow larger ships safe passage. The depth difference always provides great colors. 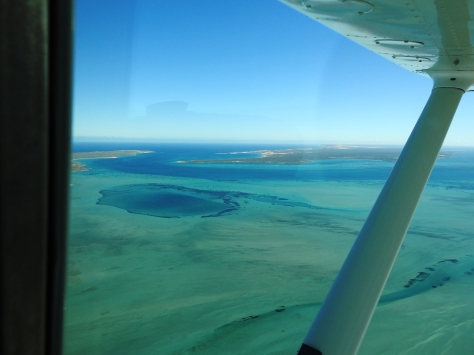 The western coastline of the Carrarang Peninsula was a steep rock face that the Indian Ocean waves crash into. You can see the few dirt roads that cross the land here. 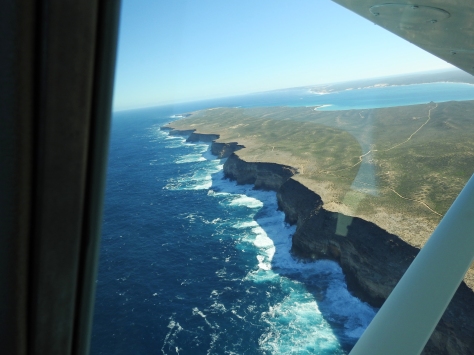 The northern point of the peninsula is a good camping area, but it takes quite a while to get to it on the roads. A ferry leaves from this point to Dirk Hartog Island to the north where the one-way cost was more than our flight. The ferry supplies the Island with food, fuel, materials and the occasional tourist. 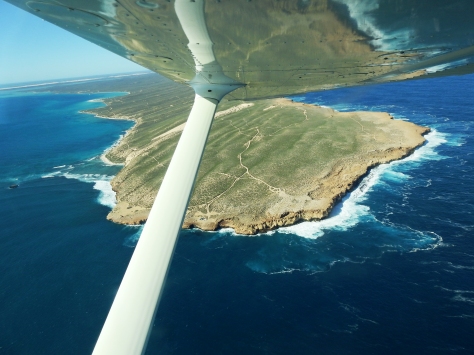 A huge sand dune covers the southeastern side of Dirk Hartog Island. Our pilot said that the dune shifts quite a bit due to the local winds. 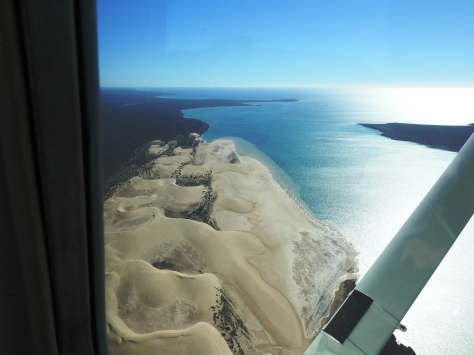 Dirk Hartog Island’s western coast was also a cliff attempting to hold back the Indian Ocean. The historic island is owned by one family who used to use it for sheep ranching. However, it’s now used for tourism and environmental research. The family still lives there and coordinates all the activities on their island.

A recently completed project was to kill all non-native animals (feral cats, foxes and rabbits) and re-introduce the native ones. It took about 20 years to do this. We could see the fence-line roads that ran across the island as they slowly isolated the non-native species into a smaller and smaller area on the island during the eradication process. 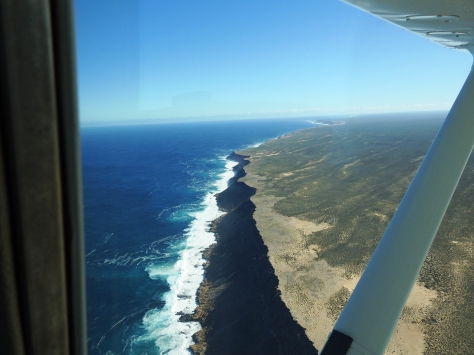 A lighthouse is at the northern tip of the island, the most western location of Australia. We spotted a couple of manta rays in the water near the point. Fishing is a big industry in this area, but as a world heritage site it is heavy regulated. 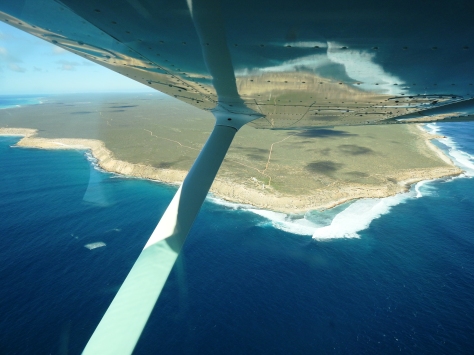 We then crossed the bay again and flew over the tip of the Peron Peninsula, the most northern part of the Francois Peron National Park. The orange dirt with white sand beaches provided a nice contrast. 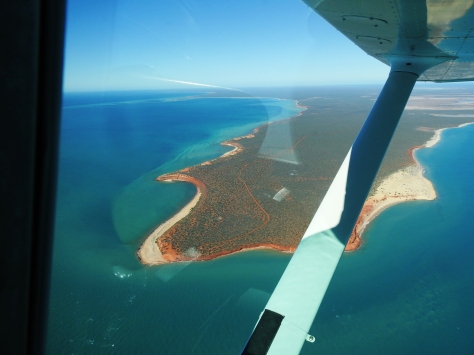 The park had several campgrounds on the peninsula. We flew over one of the campgrounds near the beach. To get from Denham to the point or to this campground takes an entire day due to the road conditions – definitely not a good option for a day trip. However, given its beauty, I’m not sure I would only want to stay just one day here.

As we found out in our travels later through the Kimberly region, Australians take packing and camping in remote locations to extremes. Keep in mind that ARB, the huge off-road equipment company, is Australian and came about from trips through the outback in the mid-70s. 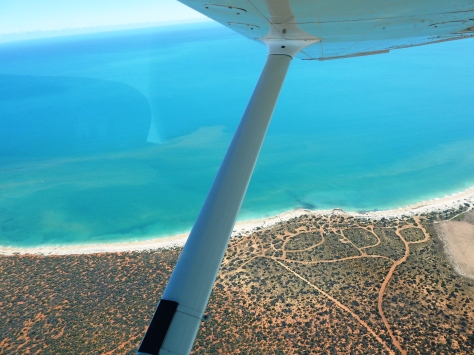 The colors of both the ground and water were just amazing. As you can see, there are not many roads to explore much of the park. I’m glad we chose the aerial option.

The park is best known for the Big Lagoon area, a colorful tidal area with many pools and lots of marine life. 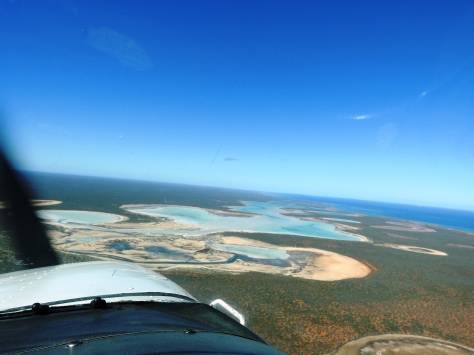 The lagoon was very shallow water, but colorful. The road through the park winds around this area and would be a fun drive. The park has a tire deflation – inflation station at its entry point. You must have 4-wheel drive and reduce your tire pressure to at least 20 PSI to enter the park. There is even a list of approved 4-wheel drive vehicles that are allowed to enter. 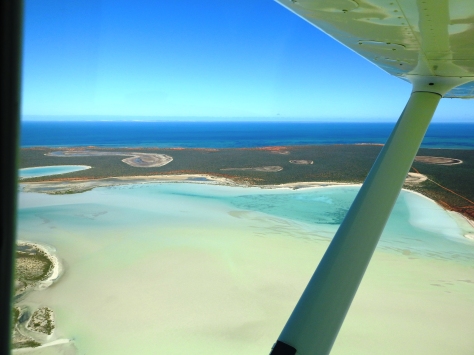 Several little pools feed into the lagoon. This would be a great place for a kayak. You could have your own private pools to explore. 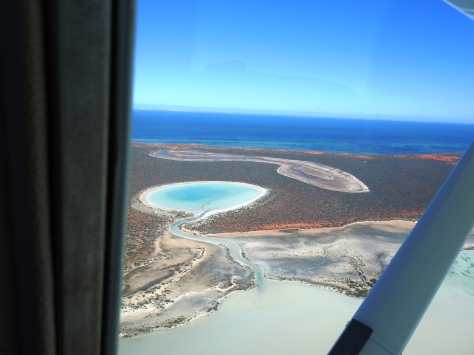 The outlet of the lagoon flows into the bay and again is just a spectrum of colors.

Continuing south, you could see Denham again on the coast in the distance as we completed the loop, as well as the sea grass field in the bay that is home to the resident dugong. 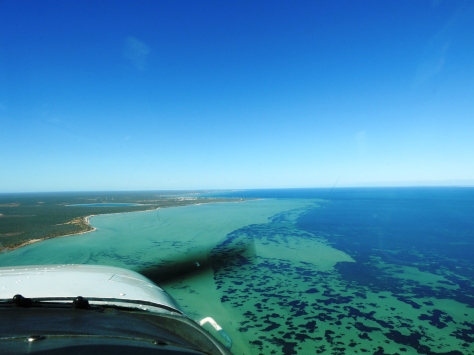 I’m glad we waited for a better day to do the flight. It was the best way to see this large area in just one day. After the flight we turned south and began our trip back to Perth.

When we first began planning this trip, we wanted to rent a car and drive from Perth to Broome to meet up with the relatives for the commercial tour, rather than an out-and-back trip from Perth and then a flight to Broome. However, it gets even more remote north of Shark Bay and the AVIS restrictions stated that you could not drive their 4-wheel drive rental car north of Carnarvon, a town on the coast just north of the Shark Bay area. I called AVIS and asked for clarification on this and was told by one of the North American representatives that the limitation was true because it would be taking the car out of Australia….

Rather than point out the obvious geography error to this person, we switched our plans. In hindsight, it was a good thing since it eliminated the huge one-way rental charge, more than covering the flight from Perth to Broome, and gave us a chance to see some things we drove by on the way north to Denham.