Being a Saturday, we were worried that finding a camping spot on the outskirts of Seattle would be difficult. However, we figured it may be easier to find a spot in the rain, as we left Whidbey Island in a downpour. We pulled into a campground by Grandy Lake and found a spot as the rain continued to come down. We looked next to us and the guy that just arrived before us was setting up his camp in his tee-shirt, where the temperature was roughly 50 degrees in the cold rain. Obviously, folks in this part of the US are very comfortable in the rain – lol.

About an hour after we arrived the rain stopped, and the sun even poked out for a nice evening. The small lake had what looked like some old structure that once was built out over the lake. All that remained were the wooden support logs buried into the lakebed. I took this shot from our campsite and then we noticed the lone red pine tree on the far side. 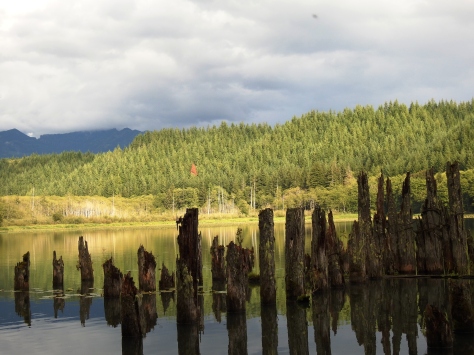 Not sure why the beetles only attacked and killed this one tree on the entire hillside, or if it was just a different type of tree, but it was very interesting. 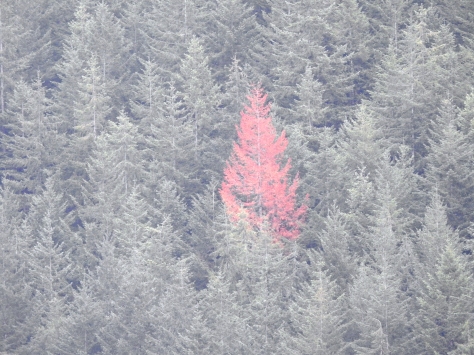 The camper next to us was an older guy and his Dachshund named Lucky, each with a chair around their campfire. While he went inside to grab something, Lucky came over to our site and jumped into Pam’s lap. Lucky was enjoying a good scratch when his owner looked over and called. I didn’t know dogs could look so guilty, but Lucky slinked back to his own chair and campsite for the rest of the evening – lol.

As we sat out in the late evening and watched the lake, we saw a lone beaver slowly making a smooth path across in the water.

We also noticed a bird that moved so fast from spot to spot it looked like it was teleporting. We tried to identify it, and could not agree, but I still think it is a female purple finch. If anyone can confirm this to settle our bet I would appreciate it – think (female purple finch) ….. (Pam’s guess is some type of wren.)

The next day we headed into North Cascades National Park. Neither of us had been there before. Unfortunately, it was still very smoky and overcast, and the steep mountains rose up into the clouds, but what we could see was impressive.

As we traveled west the clouds began to clear. We camped at Colonial campground in the park. We had stopped at the visitor center and the ranger told us that the campground is usually full due to online reservations (recreation.gov), but to check the tags on the campsite posts because sometimes there is an open campsite. The campground sign said “Campground Full” as we pulled in, but we decided to drive through for future reference. As we rounded the last corner in the campground there was a campsite open for one night.

We set up camp, which takes about 5 minutes with the Roamer, and headed out for a nice hike. 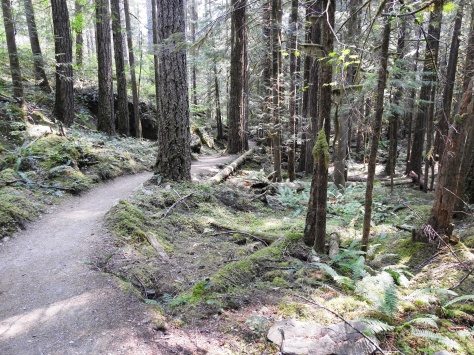 The trail took us from the lake level to a nice overlook. The steepness of the mountains for their size is something I had never seen before. It was beautiful. 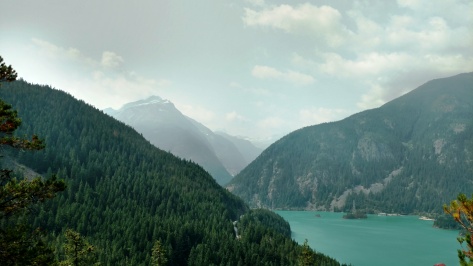 When we camp around the west we always hear the chipmunks and squirrels, but they are so quick and elusive that it’s tough to get a good shot of them. However, I caught this guy at the summit hoping we were going to share some of our lunch – which we didn’t. 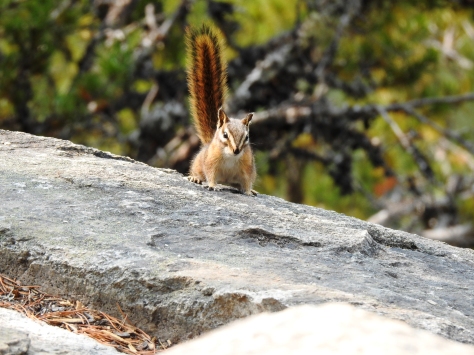 The rivers and lakes are all glacier fed so they all have the “glacier milk” color that is unique to the runoff generated waterways. It’s a striking color when you are expecting the normal fresh water deep blue or green.

The east side of the park was deep in smoke due to the forest fires in the area. We’ll have to come back here to see the parts of the park hidden in smoke. What a place.

Just east of the park, we stopped at Hank’s grocery store in Twisp, WA to restock. For a small town the grocery store it was immaculate and well stocked, but it also had animal mounts everywhere, including lions and gazelles. Turns out the owner loves hunting and there is a story unique to every mount there.

As we continuned east on Hwy 20 we came to a sign that informed us that the road was closed 35 miles headed and we would have to detour around the closure. In this part of the country it meant a detour of about 100 miles due to the lack of roads and bridges that cross the upper section of the Columbia River. Luckily for us Curlew Lake State Park was along the detour so we stopped there for the night.

I picked and paid for a spot at the entrance, using their self-help system, which turned out to be a horrible spot. The host down in the campground said we could park anywhere so we pick the tent camping area that was deserted. Sometimes you just don’t want to answer questions about your rig. A good book and a beer do wonders at those times.

We both read a lot during our travels. I average about two books a week, while Pam reads easily twice that amount. She reads lots of thrillers and murder mysteries, so has probably compiled about 1000 ways to dispose of me and not get caught if I piss her off – lol. I’m a little more eclectic in my reading choices but tend to read more sci-fi just to see what technologies are created in the boundless imaginations of the authors.

We watched a Huey with a bambi bucket scoop water from the lake and head off to a local forest fire. 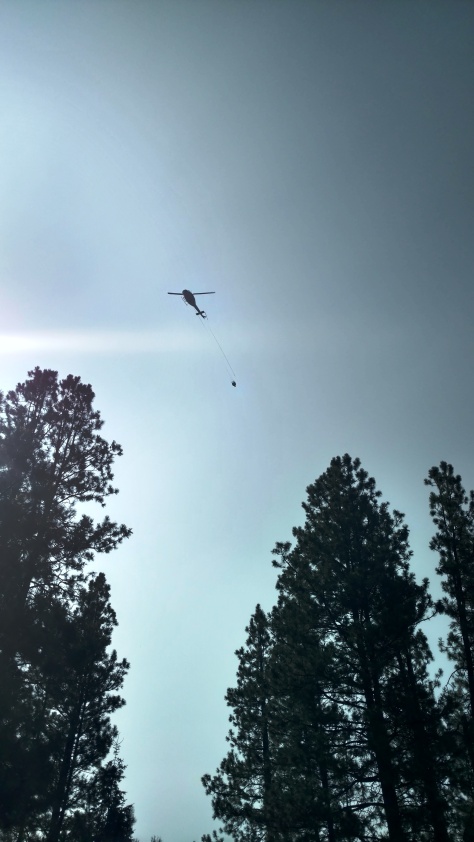 We also spotted an osprey nest and caught a shot of the parent bringing a fish snack back home for the nearly full-grown kids. 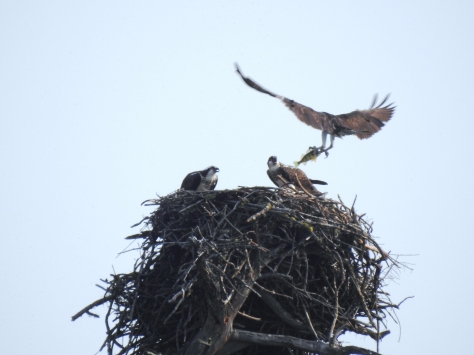 A tree by the lake also had a number of raven nests. 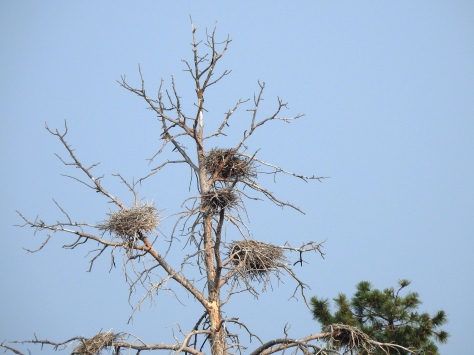 The next morning, we completed the detour, coming dangerously close to the Canadian border once again. We crossed the Columbia River at Kettle Falls, WA and continued eastward.

One thought on “Northern Washington”