We have been traveling on the road for the last four of Pam’s birthdays. Last year we were with Dave and Kathy in the middle of Rainy Lake, north of Minnesota. This year we headed for the most northwest spot in the US, Cape Flattery on the Makah Indian Reservation, located on the very tip of the Olympic peninsula. We stopped at the Makah Cultural Center. No pictures were allowed inside so I only got a shot of their door.

It told of their history along the coast. One of their villages was buried by a mudslide hundreds of years ago, and the recently excavated items show an interesting snapshot in time of their life back then. 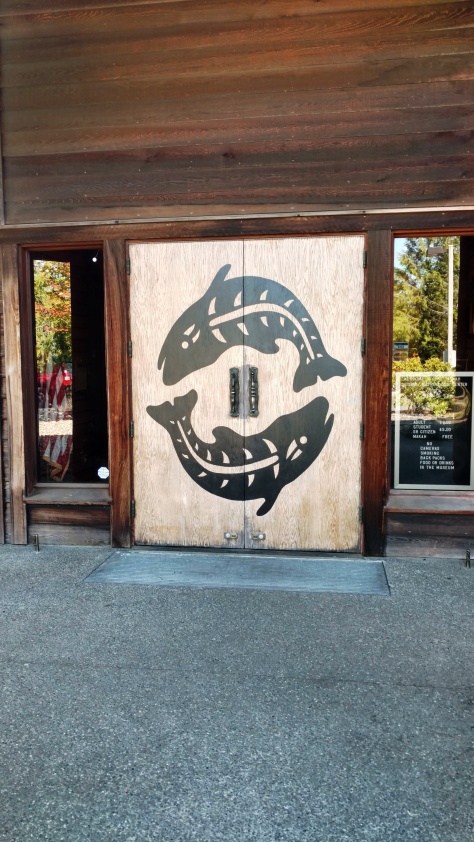 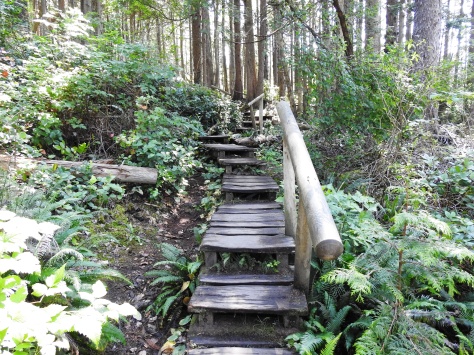 Some of the cedar path was not actually made of boards. 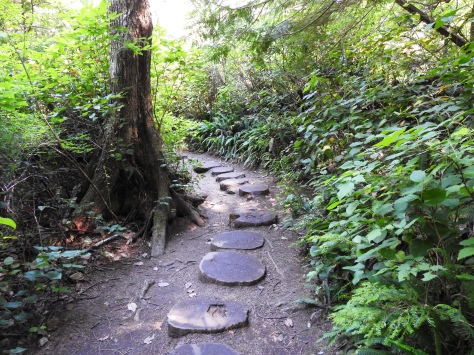 Getting there was fun along the path, but Cape Flattery point was just gorgeous. 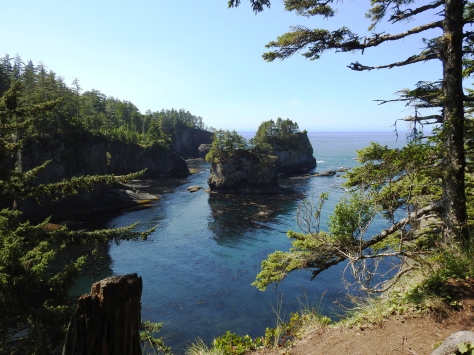 The water was crystal clear, and the colors were spectacular. 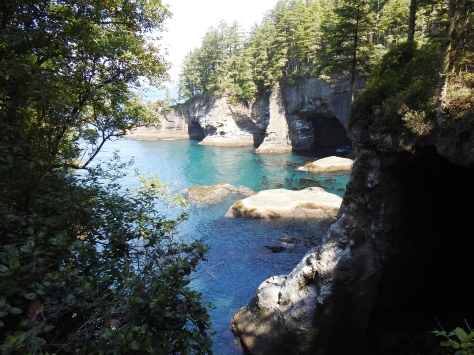 The island off the Cape had a lighthouse station and both Pam and I wondered how you get that posting.

The small rock outcroppings were alive with life. We spotted sea lions sunning themselves on one of the nearby rocks. 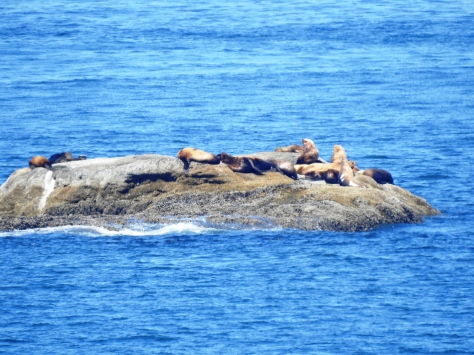 There was a black oyster catcher on another local rock outcropping, another lifer for us. 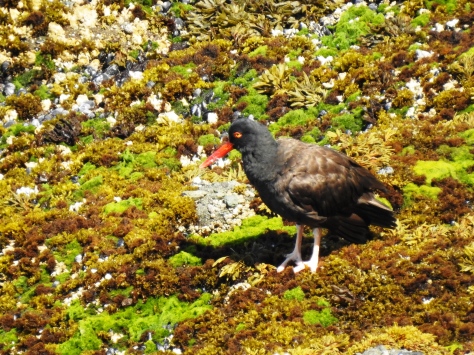 We left the Cape and camped at Hobuck Beach Resort, an open field campground next to the beach on the reservation. We had an evening beach walk and delicious steaks for a nice birthday dinner. 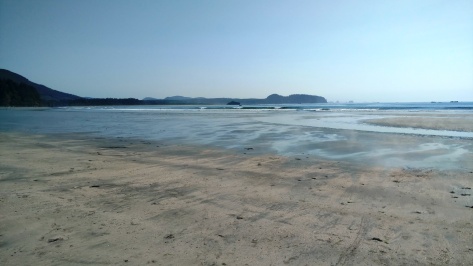 The next day, we headed just a little south and camped at Ozette Lake campground. The lake and sky were beautiful shades of blue. No forest fires or smoke here. A couple floating on paddle boards in the water said the lake was warm for the first few inches, but all bets were off below that thin layer. So we kept to the forest and hiked instead. 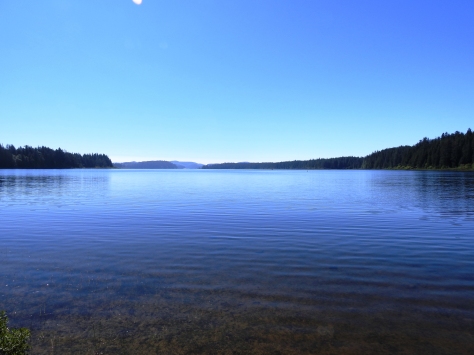 The hike out to the coast was about 3 miles through the forest. Similar to Cape Flattery, the trail was a series of raised cedar walkways that made the trip out and back cruise by quickly due to the interesting walkway. 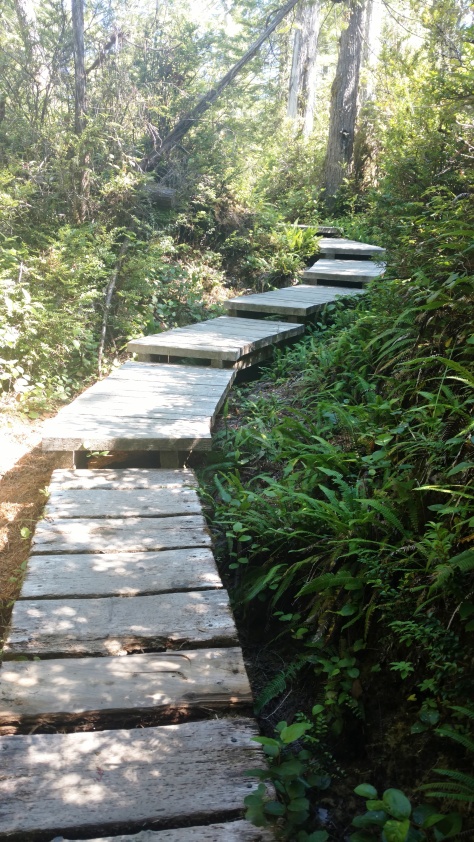 The walkway snaked through the forest all the way to the coast. 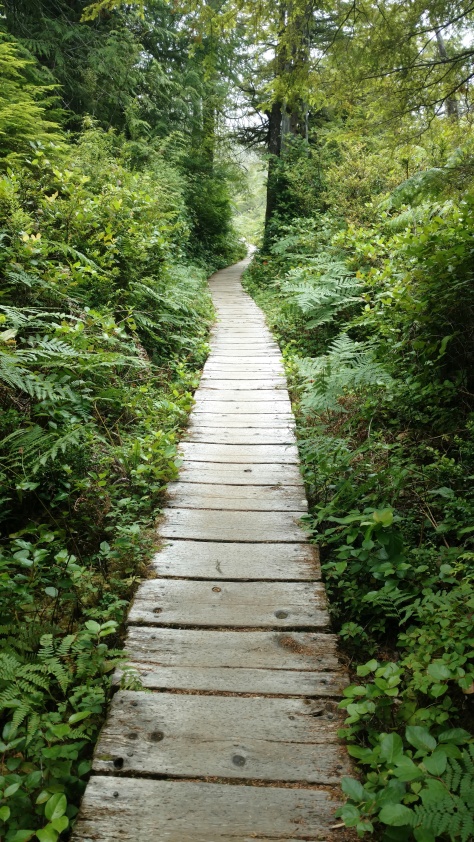 When we arrived at the coast, the morning fog was just lifting. We pulled up a log, of which there were many to choose from, had lunch and hiked along the beach for a while before heading back to camp. 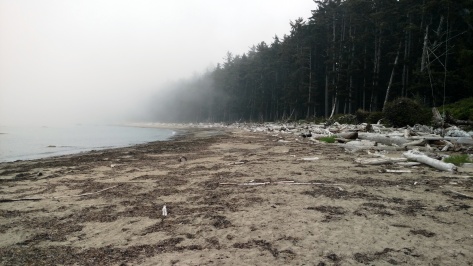 The next day was Friday and we had been having such good luck with camp spots we decided to tempt fate and go to Sol Duc Hot Springs in Olympic National Park to find a campsite. They were all taken, but we did refill our water tank there. We headed further east and took a turn along a very narrow road to the Log Cabin Resort on Crescent Lake, still within Olympic National Park. We didn’t need a cabin, but they did have a camping spot that we snatched for the evening. Crescent Lake was also beautiful. Being a resort as well, we decided to try their restaurant for a nice evening out. The dining room had a dozen tables, but only ours and two others were occupied for dinner. The food was very good and it took quite some time to finish the bottle of wine as we watched the sunset. 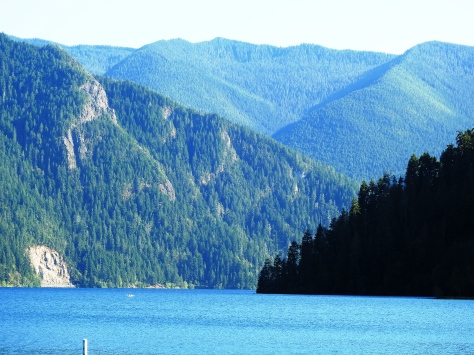 The next day we left the Olympic Peninsula, taking the ferry from Port Townsend to Whidbey Island. 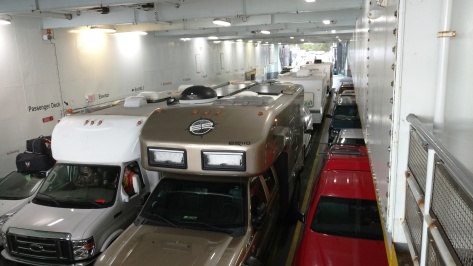 As we left Port Townsend a weather front full of rain was right on our heels.

The weather front and rain caught us as we made port in Coupeville and proceeded to pour on us as we crossed Whidbey Island, and back onto the mainland. Our time on the Olympic Peninsula came to an end as we headed for the North Cascades in the rain.