We entered south-central Montana from the Bighorn Mountains area in Wyoming. I wanted to revisit the Little Bighorn Battlefield National Monument because of a recent addition to the place. As we approached the NM on a back-road we came across a tow truck attempting to pull an 18-wheeler out of a ditch. The tow truck and 18-wheeler blocked the road by this operation. The tow operator came over and asked if he could borrow our jumper cables since the 18-wheeler’s battery was dead and he had misplaced his. Luckily, we have heavy duty cables. He got the 18-wheeler started and was then able to release its brakes. 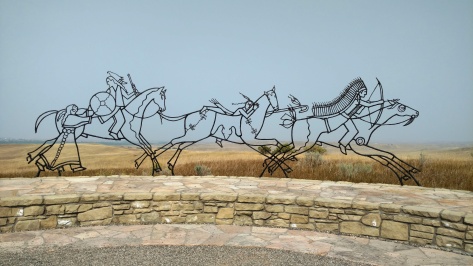 Pam and I hiked the trails through the monument and read the information boards along the way. The initial attack by Lt. Col. Custer and the 7th Calvary was on a two-mile long village by the river and trees in the valley below. His less than honorable tactics of attempting to capture the woman and children to force a surrender did not work and the combined forces of the Lakota – Northern Cheyenne and Arapaho warriors drove the calvary away from the village and up the hill to the place of Custer’s last stand. The news of Custer’s loss arrived back in Washington, DC during the 1876 centennial celebration, which led to an increased military response in the months that followed. 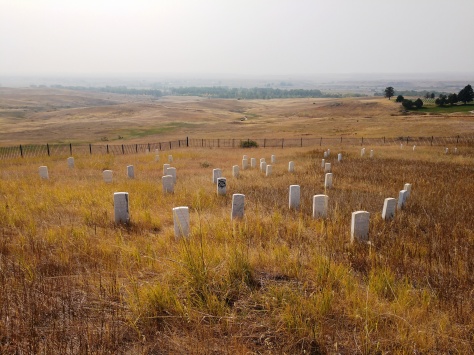 We camped near the National Monument at the 7th Ranch RV Camp, which is now within the Crow Reservation. It had a nice hiking trail that we enjoyed as the sun set.

The wildfire smoke from the northern California and central Oregon fires was becoming very noticeable. Not too long after this shot the sun disappeared from view as it approached the horizon, due to the smoke layer, before it actually set.

There are a few apps we use when we travel to help decide our route relative to air quality and weather. One is “Smoke Sense”, which shows the air quality, fire locations and even the projected smoke path for the next couple of days. A second is “NOAA Weather Radar” to get the current and future weather patterns. A third app is “Wildfire Info”, which shows the current wildfire locations along with more detailed information on closures and fire containment. A final app is “Windfinder”, which shows the current and projected winds for the entire globe for at least a week into the future, and surprisingly it is very accurate.

We then drove west to Bozeman, MT to visit with our nephew, Tim, who is currently attending Montana State. We planned to meet for dinner, so we camped close to town at the Bozeman Hot Springs. It was the typical close-quarters parking for RVs, but it was handy to downtown Bozeman and the soak in the hot springs was very relaxing.

We followed up the nice soak in the hot springs with a dinner at the Montana Ale Works with Tim. We talked about his studies and his lab work on a NASA grant looking at new technologies on weather balloons. Before leaving town, we visited one of our favorite museums, the Museum of the Rockies. One of the best attributes of this museum are the two temporary exhibits that always display interesting items. Unfortunately, both were closed the day we were there. A Thomas D. Mangelsen exhibit was to open the following week, showcasing his incredible wildlife photos, and probably the great stories behind each shot. The other exhibit on 20th Century Japanese woodblock prints was due to open a few weeks after we left. We’ll have to go back again in the future.

After our tour of the museum, we drove to Missoula, MT during a long-desired rainstorm that helped to clear the air of the wildfire smoke. It was great timing for us with the rain because the air quality in parts of western Montana was into the unhealthy zone. We arrived at Klaus and Leslie’s place (Pam’s sister) in the rain. The next day Missoula had blue skies and puffy white clouds, and everyone was outside once again to enjoy the clean air. We hiked Mt Sentinel, or “M” mountain that overlooks the University of Montana and Missoula.

During our stay in Missoula I restocked our supplies with huge batches of chicken and rice soup and Bolognese sauce. Pam shopped for winter clothes for our new granddaughter, which are hard to find in Phoenix unless you only need a long sleeve shirt. Leslie and Pam baked up a variety of yummy plum desserts after a neighbor dropped off a few bags of freshly picked Italian prune plums.

Leslie and Klaus had made reservations at Holland Lake CG for the last weekend they would be open. The campground has some first-come, first-serve spots so Pam and I drove up towards the end of the week to grab one of those. The campground was very nice, where each spot was nearly 1/8th of an acre in size. We ended up getting a spacious spot next to Leslie and Klaus right on the water.

The lake was beautiful and the view from our campsite was gorgeous. 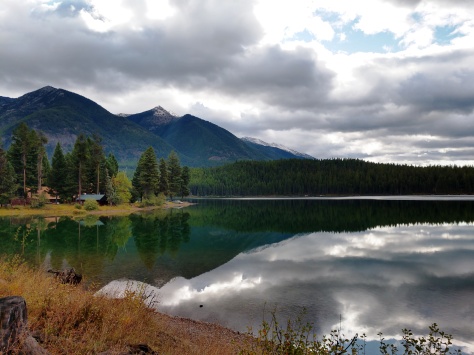 While watching the lake a merganser landed and swam around. Usually we see them floating and feeding on running streams, so it was odd to see it on a lake.

It had a unique hunting / feeding style, where it would swim with it head partially submerged, and then dive for the food. I guess they can see under water.

We hiked to the upper falls with some friends of Leslie and Klaus’ who were also camped there for the last weekend. Pam, Leslie, and I turned back at the falls for about a 6-mile hike. Klaus and their friends continued further up the mountain to the lake that feeds the falls before returning to the campground. The view of the lake and the snow-capped Mission Mountains was majestic from the upper side of the falls.

The next day we hiked to the lower side of the falls. The morning broke with not a breath of wind, so the lake was glass smooth.

It was a new campground for us and one that will definitely be added to the list of favorites.

We only got a short visit with Stephanie, our niece, from a safe distance because her boyfriend had tested positive for COVID and she was in her 14-day quarantine period. She ended up testing negative so that was good. She took up crocheting during her quarantine and showed us her beautiful shawl that she finished. She was going to attempt knitted hats next.

The following weekend we left Missoula on our way to Idaho to meet up with Pam’s brother coming up from Salt Lake City. Rather than make the 6-hour drive to our intended rendezvous location, we left a day early with Leslie and Klaus and camped roughly halfway there in Sula, MT. Sula is a sparsely populated rural community. The community has the most compact post office. No bulk mail through this place.

We camped the night at Martin Creek Campground, a nice little spot about 15 miles up into the hills past Sula. After Labor Day, the forest service campgrounds are either closed or open and free. Luckily, this campground was one of the latter.

On the drive back through Sula the next day we encountered a few bighorn sheep on the road. This guy decided to join the flow of traffic for awhile before bounding up the hillside to join his buddies. 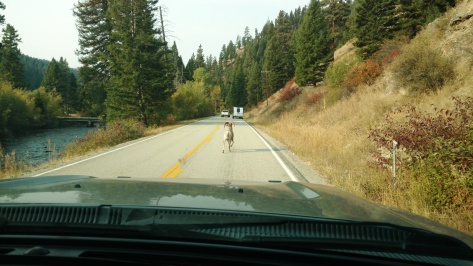 Just south of Sula the road peaks at the Montana – Idaho border through the 7,300-foot Chief Joseph Pass. We drove through the pass and into Idaho, saying goodbye to Montana for this trip in 2020.