We began our exploration of the Olympic Peninsula heading north into the Olympic National Forest, and to Quinault, WA. The drive was through very lush vegetation that broke into a clearing with a beautiful lake. We saw a sign for the world’s largest spruce tree and had to stop. The spruce tree was 191 feet tall, 59 feet in circumference and over 1000 years old. Standing at the base, I was barely visible.

Along the drive to Quinault we passed a huge hydrangea bush with bright blue flowers in bloom. 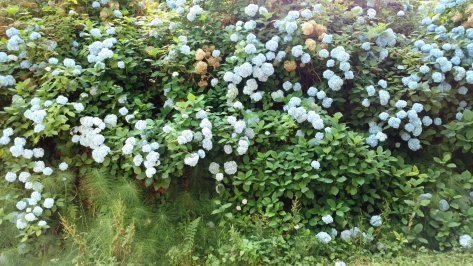 We made our way to the Olympic National Park lodge at Kalaloch, WA and had a tasty lunch while overlooking a foggy coastline. 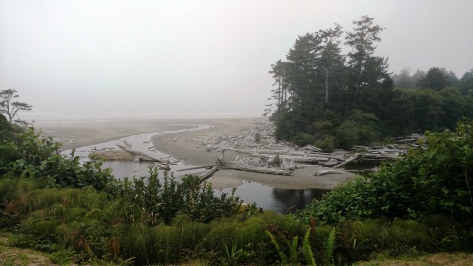 Continuing north we passed a sign for the largest cedar tree and it too was equally impressive.

Finally, we arrived at the Hoh Rain Forest campground in the Olympic National Park. It was a first-come, first-served campground and luckily there was a nice spot for us to stop for a couple of days.

We did a couple of short hikes after arriving to see the beauty of the rain forest. It gets over 180 inches of rain per year, but luckily it was sunny weather for our time there. The trees were draped with moss. 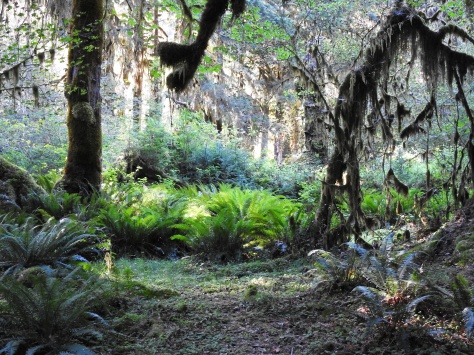 There were unique trees everywhere. 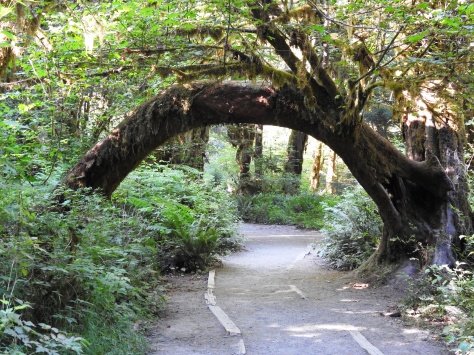 Some of the conifers there were just huge, rising a few 100 feet into the sky. 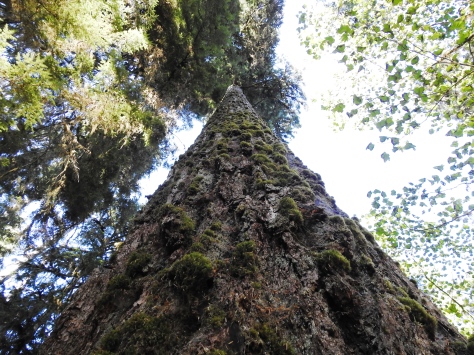 Even the older ones that have fallen years before shape the trails, because they are too tall to climb over. They also act as a source of growth for new trees to sprout, known as a nurse log. 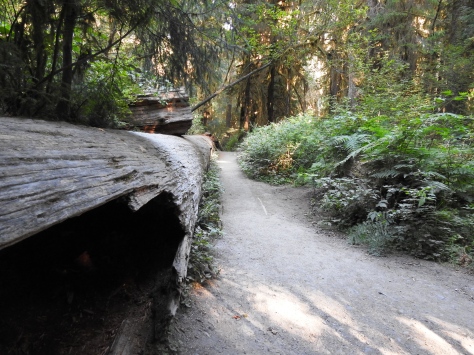 Compared to the desert, the place looks prehistoric. Instead of bears I expected to see a T-Rex appear around the next turn in the trail.

It was green, lush and beautiful everywhere. 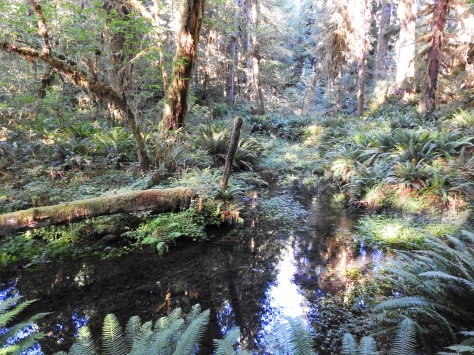 The next day we took off on a longer hike along the Hoh River, which is a glacier melt river fed from Mt. Olympus. The 18-mile trail leads into the backcountry and to Mt. Olympus. We only hiked 4 miles of the trail.

It was a nice hike and we stopped for lunch along the river, using a tree root for our lunchtime bench.

There was also a small stream flowing under a bridge along the trail.

When the signs in the bathrooms say, “Do not wash your boots in the sink”, you know it’s usually raining there. Therefore, we were extremely lucky to have two days with nothing but sunshine. The Roamer, however, was parked under the tree canopy at our campsite so the solar panels did not see much sunlight for a couple of days. To recharge our batteries, I had to start the truck to kick in the engine’s generator so that Pam could have her morning coffee on her birthday before we continued north. Priorities!