While in Idaho, we called a fellow camper we had dinner with while on the road in southern Arizona. Ward lives in Olympia, WA and said, “if you are ever in the area”. He gave us some great things to see and places to camp. Unfortunately, he was out enjoying the outdoors as we passed Olympia, so we never did get together this trip.

One place he recommended was Steptoe Butte State Park in southeastern Washington. The park is a lone butte rising a few thousand feet above the local farm country. As can be seem by our navigation system, the road spirals up the butte to the park located at the top. 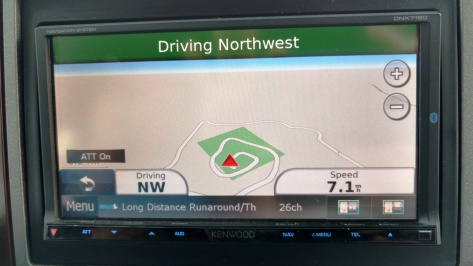 The road was not much wider than our vehicle, but luckily there was no traffic. As you spiraled around you were treated to an incredible view to the horizon in all directions. 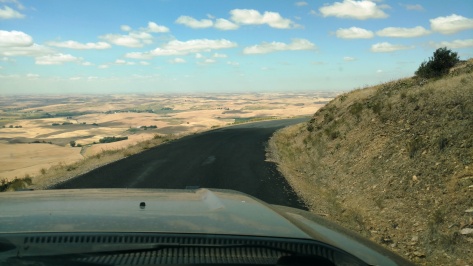 The wheat and potato fields below and the puffy-white clouds above provided some gorgeous colors as you looked out over a good chunk of southeastern Washington. 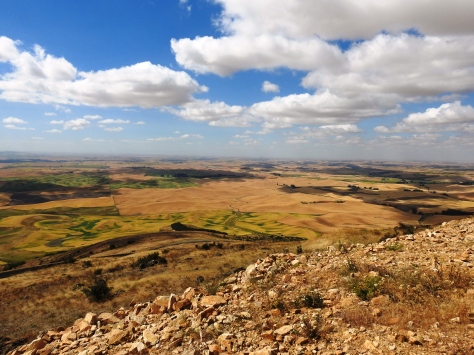 The potato fields were either just sprayed to get them ready for harvest, or the nighttime weather was getting near freezing to cause the gold to green hues on the top of the plants. 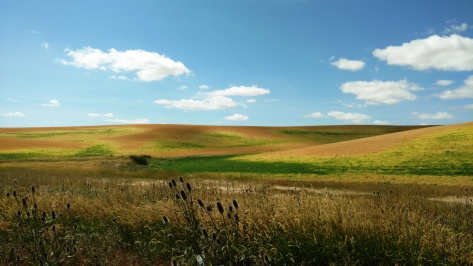 We headed eastward and stopped at Palouse Falls State Park. The 200-foot waterfall, and the local rock formations were stunning. 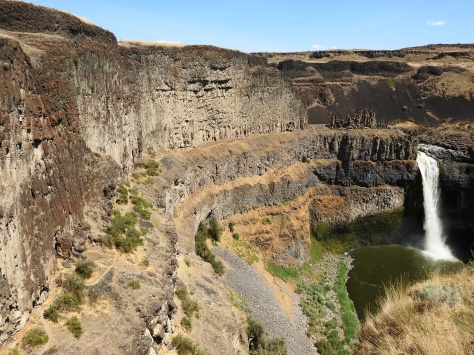 The Palouse River flows into a mysterious-looking gorge downstream of the falls. 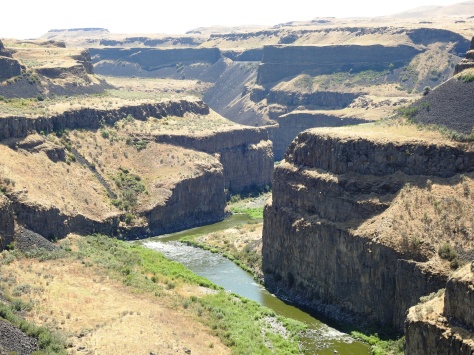 Being Friday and with no camping reservations, we didn’t want to get too far west and into higher population areas where campgrounds would be booked full. We stopped for the night at Lewis and Clark Trail State Park near Dayton, WA and took their last open spot – complete with a teepee. 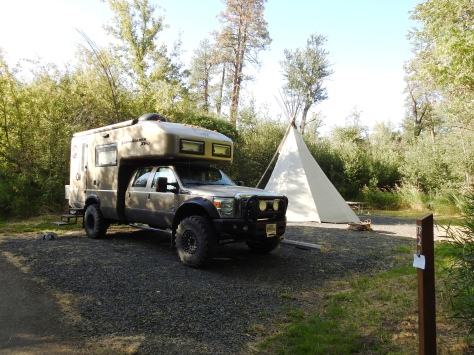 The next day we continued west through Yakima, WA and were greeted with the largest hops fields either of us had ever seem. There were acres and acres of hops that went on for miles. It really made me thirsty for a good, cold beer. 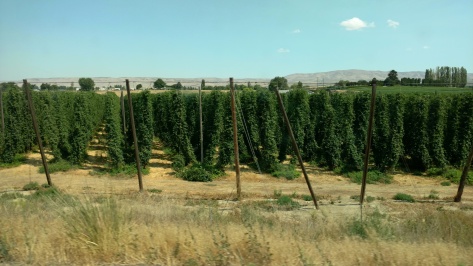 As we neared Rainier National Park on a Saturday night, all of the local campgrounds were full. We headed into the forest along a road that was closed a little further ahead due to fire. 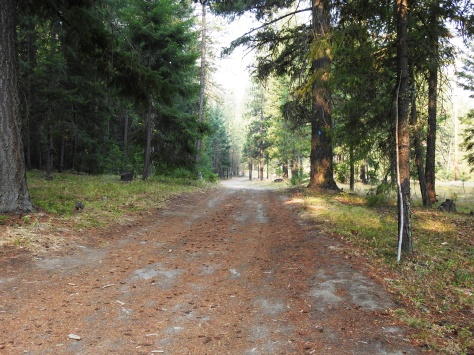 We found a great spot off the forest road near Rimrock Lake to disperse camp for the night that was out of sight and sound of all other campers in the area. This was much preferred to some of the full campgrounds we passed, where folks we so close to next campers that you might as well have camped in a parking lot. 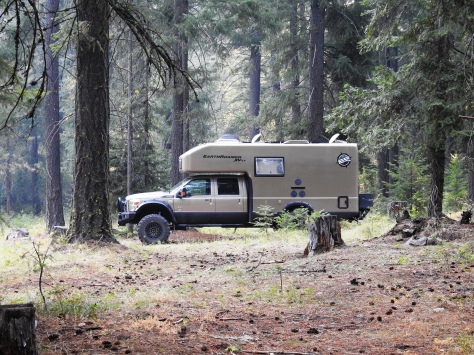 The next morning, we drove into Rainier National Park and purchased our National Parks Pass for the fifth year in a row. We got a cute green tree frog on this year’s card. We visit so many parks in the west that our Parks Pass pays for itself many times over during the year.

We came into the park through the south entrance, which was not busy at all. Ward had told us that the flowers were in full bloom at the mountain’s base, so we headed toward Paradise. Soon into the park, the mountain, which reaches up to 14,411 feet, becomes visible and it is something to see. 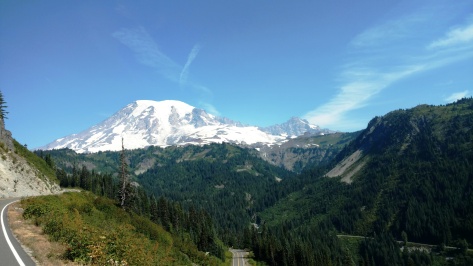 We stopped at Reflection Lake to do some hiking; and reflecting. The melting glaciers on Mt. Rainer provide most of the drinking water for Seattle. I guess its good for them they are melting then, right? Had to pick up some Rainier Beer to get my share of the glacial water. Raaaai-neeeeir Beeeer; I can still see the motorcycle climbing up through the forest – best commercial ever – lol. 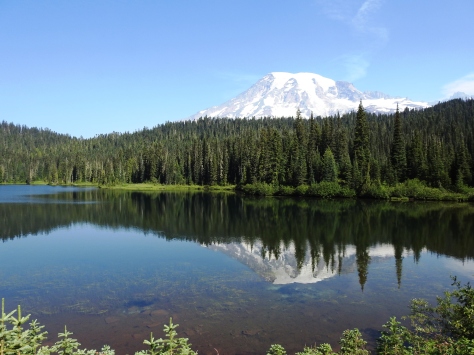 It was the first sunny day in the park for a few days; and being a weekend the parking lot in Paradise was overflowing. You can’t really squeeze the Roamer into a crowded parking lot, so we found another place to stop and hike along a stream. 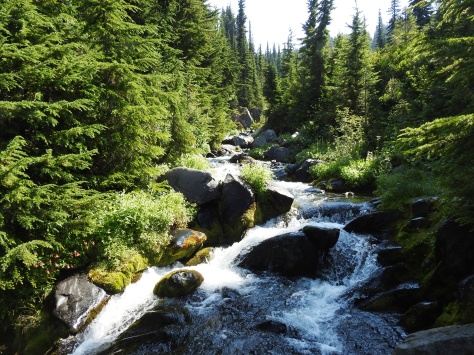 While it wasn’t the place noted for flowers they were out and beautiful along our hike. 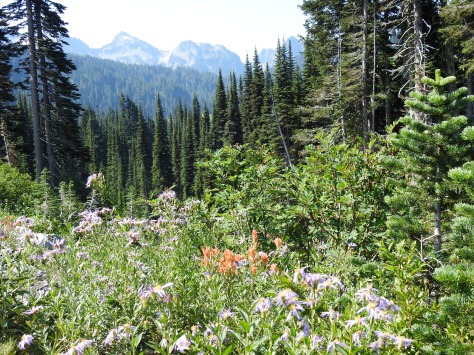 We exited on the west side of the park and there was about a five-mile line of cars coming from Seattle, waiting to get through the gate. I was glad we got there early, and on our out way opposite that traffic. The nice thing with the Parks Pass is you don’t feel like you need to stay for the entire day.

We drove to the coast and camped for the night at Ocean City State Park. The beach there was huge. We found out you could spend the day with your vehicle on the beach, but you had to leave by 11pm, so no overnight camping allowed. 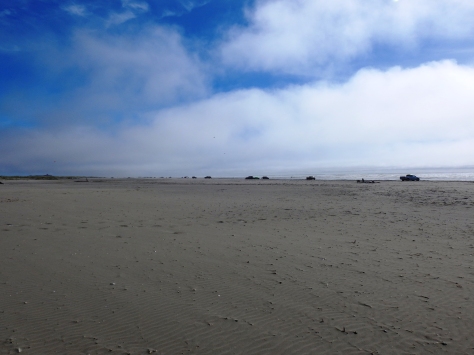 It was peaceful on the beach and we ran into another couple who camped at many of the places we had visited over the years. Their favorite restaurant was even Hell’s Backbone Kitchen in Boulder, UT. 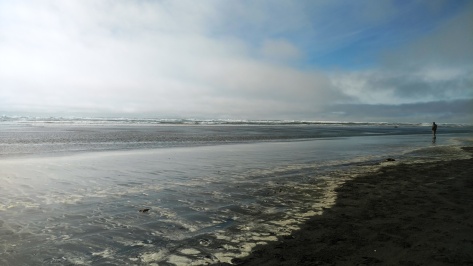 We talked for some time, got some good tips on spots to aim for in the future and watched some riders go by along the beach. 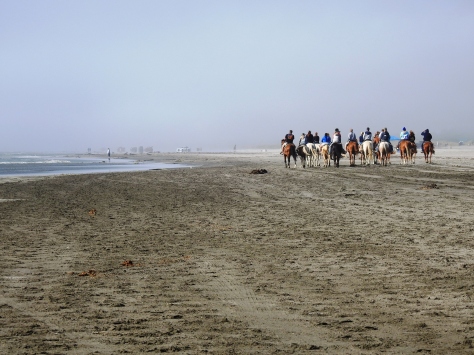 We were finally in a new unexplored area for us – the Olympic Peninsula.