We left the north rim traveling north towards Utah. We stopped at Pipe Springs National Monument just outside Fredonia, AZ. Pipe Springs has a rich history of the native Paiute Indians and Mormons settlers dating back to the 1850s. The spring was the only source of water for many miles.
Because of its strategic location, nearly half way between Zion and the Grand Canyon, Mather made it a national monument in the 1920s and put in place an equal water split between the Paiute Indians, the local ranchers and the US Government that is still in place today.

The “castle” built there was a sanctuary for Mormon wives. The cattle given to the church grazed the local fields for many years. It even had a telegraph office that connected the outpost with St George and Kanab. 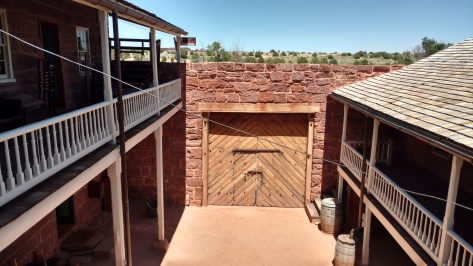 We then headed to Stateline CG along the Arizona / Utah border on the northern end of the Vermillion Cliffs. We spent the night there and hiked Wire Pass trail into the Paria Canyon. The entrance is just north of “The Wave” so the rocks are very interesting. 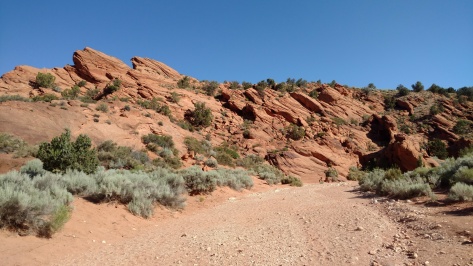 The slot canyon was nice and cool in the shade, but some light made it down to the ground.

We then took off north up Cottonwood Canyon road that runs up the Grand Staircase-Escalante National Monument. The drive was beautiful and the skies were clear. Last year we attempted to make the drive and the local rangers advised against it due to rain. Sections of the road have a clay mud that binds into your tire tread and then you just skate along the road. We ran into some back-country horse riders that said they were caught on the road in the rain and their trailers all jackknifed on them on the down hills. 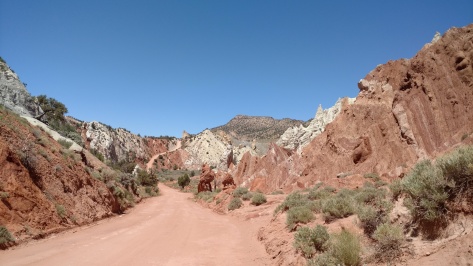 We stopped to do a couple hikes. The first ended in a river bed so we turned around.

We then hiked the cottonwoods narrows which was very beautiful.

We made our way to Grosvenor’s Arch and found a nice juniper grove just over the hill from the arch to camped. 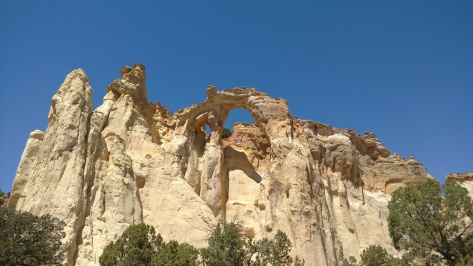 The next day we hit the north end of the drive and Kodachrome Basin State Park, where we stopped to do a hike. 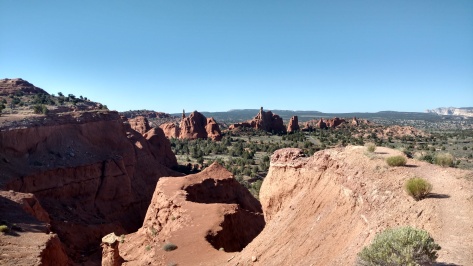 They had two campgrounds there. One in the basin that was full of RVs and another in the back-country that seemed to be more our style, but it was early in the day so we continued on. 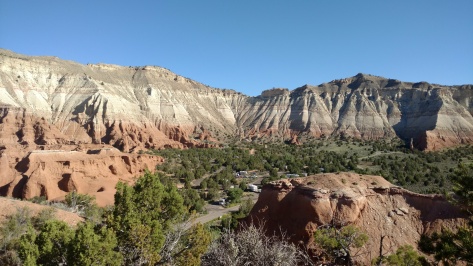 The hike had a few photo spots that led out to some interesting points. The sign at the trail entrance said to stay 10 feet from the side rock sides, but this does not look 20 feet wide. You do get some good pictures though. 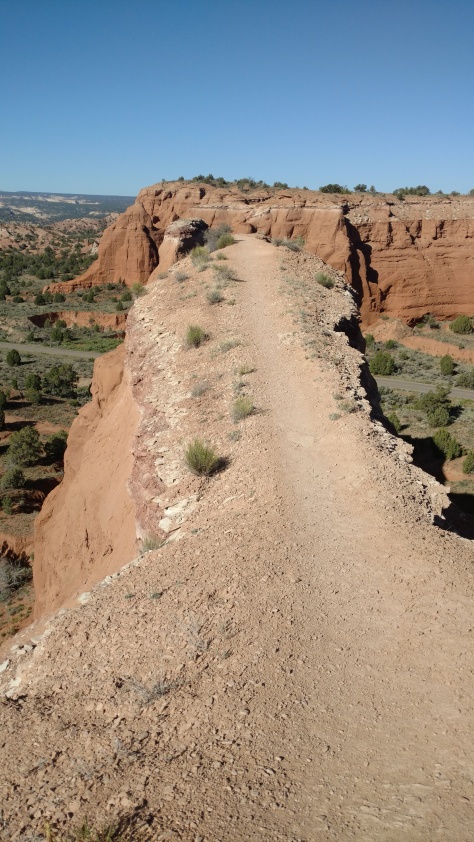 We then made our way to Boulder, Utah and to one of our favorite restaurants, Hell’s Backbone Grill, for lunch. Everything is grown locally, tastes great and the ambiance of the place makes it even better.

The restaurant is named for the road that was constructed in the 1930s by the CCC to finally connect Escalante and Boulder, Hell’s Backbone Road, separated by incredible rock formations. Now the two towns are connected by the paved and very scenic Hwy 12 that slices through amazing rock formations. The old road is now just a dirt forest road that is a great drive, so we took it. It takes the long way around the rock gorge up through the mountains and jumps the 800-foot gorge by a single lane bridge, Hell’s Backbone Bridge. It’s hard to explain the beauty of what it looks like off to both sides of the bridge so I’ll leave that for you to come see for yourselves.

We made it about half way along the road and stopped at Blue Spruce CG for the night. It was a great spot along a brook and at a higher altitude for a cool night in the pines. We had a nice campfire and watched several deer feed all around us for our entertainment.

We then headed south out of Escalante on the Hole-In-The-Rock road, a 57-mile dirt road that runs all the way to Lake Powell.
We did some good hikes along the way at Zebra,…

Dry Fork Slots, stopping to camp along the way. 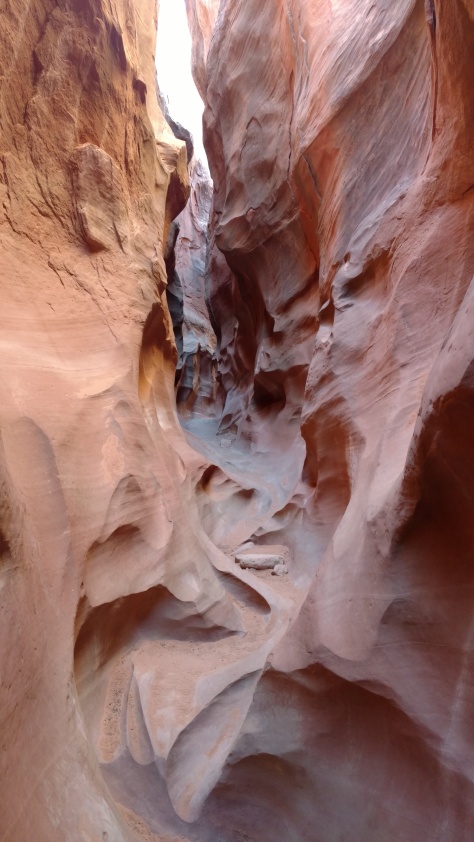 At the end of the road is “the-hole-in-the-rock” where in the 1880s Mormons looking for a faster route lowered 26 wagons and 280 people to cross the Colorado River, which is now part of Lake Powell.

We spent the night there under a beautiful moon.

Now it’s off to western Utah and Nevada.

One thought on “Grand Staircase-Escalante”