We continued across Nevada on HWY 50. The western side of the state is drier due to the higher Sierra mountains to the west. Outside of Fallon, NV is the 600 foot Sand Mountain. If you zoom in on this picture you will see an ATV just below the crest to give it some perspective. The mountain is the wind-blown remains of the ground Sierra quartz that washed into the valley from the receding glaciers that covered this part of Nevada 10,000 years ago. Around 30,000 folks now visit the site a year to have fun in the sand.

As the scenery along the highway became sparse, we stopped to read more of the historical signs posted along the road. HWY 50 was the Nevada route used by the Pony Express in 1860 between St Joseph, MO and Sacramento, CA. Several of the “Pony” stops, which were roughly 20 miles apart along the route, can still be found today. The “Pony” was a private business that only lasted 18 months with the completion of the telegraph lines that followed this same route. 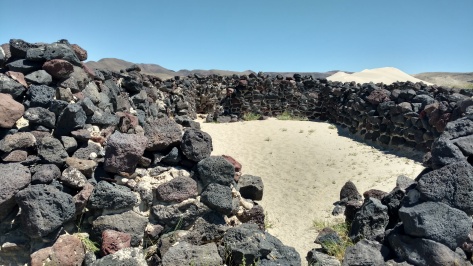 The Overland Stage also used this route along HWY 50 until the turn of the century and was part of the Lincoln Highway, the first transcontinental road. Somewhere along the line the road was by-passed by the new interstate system, and like Route 66, is now just part of history, and a much more interesting route to travel if you have the time.

We gave the Roamer a wash in Fallon, NV, knocking off the caked on mud and pine pollen from the previous weeks. We found a place by the river to camp at Fort Churchill CG, trading pollen for cottonwood snow – lol.

Fort Churchill was a western fort in the 1860s made of adobe and wood to provide a base for the military presence in western Nevada during the mid 1800s. The remains of the buildings still stand today. 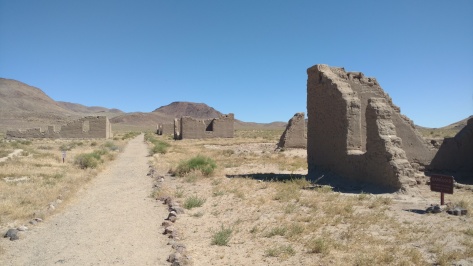 We took the dirt road west towards the California border and passed the NATC – Nevada Automotive Test Center. Every type of military vehicle was there and the roads into the hills looked like they put them through some good tests. The guy at the gate gave the Roamer a good look as a possible future test vehicle.

We hit the Nevada side of Lake Tahoe on a Sunday afternoon. Lake Tahoe is a large, deep, beautifully blue lake. According to the local paper, if you drained Lake Tahoe it would cover the entire state of California with over a foot of water.

The steep slopes into the lake makes any level land around the lake at a premium for use. There were hundreds of vacationing people and parked cars all along the winding roads that surround the beautiful lake. We headed up into the hills just above Incline Village and found a nice little campground called Mt Rose CG. 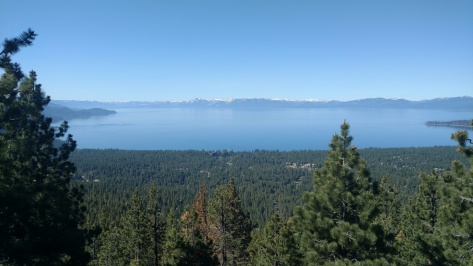 It had just opened for the year the previous Friday due to snow – yeah snow. There was still snow all around but it was melting fast.

There were a few Uinta Squirrels there that had fallen food recovery down to an art form.

We had a nice hike to a nearby meadow in the mountains.

We took the long way around Lake Tahoe as we left to see as much as we could. Emerald Bay was beautiful and may be a future stop. We did stop at the USFS Ranger station and got some tips on where to camp in the future. She did say that the July 4th weekend is not the time to be there, where in her local area the population goes from 5,000 folks to 100,000 folks – yikes! Luckily summertime road construction was in progress to help with the traffic – lol.

We stopped in South Lake Tahoe, which is in California, to stock up with food for the upcoming weekend with the boys. We then hit the California Border Inspection Station south of town. We were singled out of the line of vehicles for further inspection of produce, wood, plants, and animals. We had a good chat with the inspector, having entered California on previous trips and knew what to expect, but after I had to wonder what “border” did we cross.

We then climbed over Monitor Pass along HWY 89 and stopped for a nice lunch near the top before dropping down onto what I consider one of California‘s best roads, HWY 395. 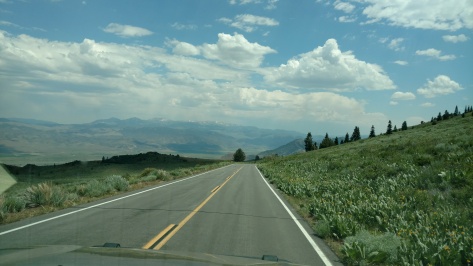 As we traveled south, clear blue skies of the last week gave way to a nice summer storm over Mono Lake.

Luckily we stopped to read the “you are here” map at the lookout and saw that there were BLM campsites up Lundy Lake road not shown on our map. We headed up the canyon and were surprised at the beauty of Lundy Lake.

We found a nice camping spot down by the river below the lake, after we made it through the trees.

We knew had picked good spot because someone left the “CAMP HOST” sign with a new envelope on our post sometime in the early morning for whoever was going to host for the upcoming holiday weekend.

We then headed for Bodie, CA – a mining town that peaked at around 10,000 folks in the late 1800s and ended mining operations in the mid 1900s. While it’s called a “Ghost Town” we were there with about 200 other folks walking around town.

The place had a lot to see, even Prince Albert in a can! 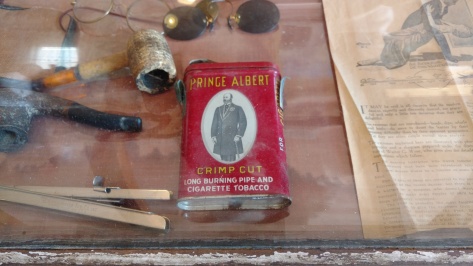 Our next stop was Mono Lake, with its structures that were the submerged calcium carbonate spires that formed around the lake spring sources. These are now visible because the water level is much lower since LA has been pulling water from as far away as here since the 1940s.

There was a forest fire that recently burned around Lee Vining and up the mountainside. Fire crews were still all over the place putting out the last of the fires. 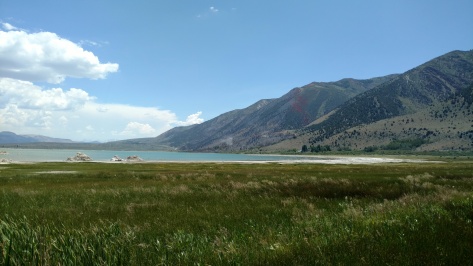 We are camped now at June Lake Beach CG, another beautiful lake in the high Sierras.

May be tough to find a place to camp in tomorrow given the holiday weekend and no reservations, but we’ll meet up with the boys in Lone Pine on Saturday for a few days.