There were several forest fires in Yellowstone NP and the smoke would settle in the night to blanket even the west side of the park, including the Hebgen Lake area. Therefore, we headed southwest into Idaho to visit some recommended places that we missed on the way north.

Our first stop was Upper and Lower Mesa Falls on the Henrys Fork River. The Upper Falls was a single drop of 114 feet onto a slab of solid rock that made the river bottom.

The Lower Falls, about a mile away, was a beautiful 65-foot cascade of water.

We then headed into Wyoming and the southwestern corner of Yellowstone NP to see Cave Falls along the Cave River. As we drove in we noticed huge plumes of forest fire smoke in the distance from the east near Grand Teton NP. 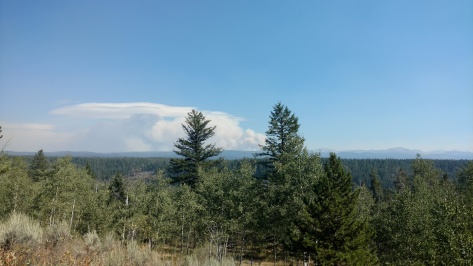 Cave Falls was a series of picturesque falls down the river where this was the largest single drop of about 20 feet.

We camped the night at Cave Falls CG, which was in the forest just outside the park. I think we were the only ones there. We had a nice spot next to the Cave River. Mornings are not too rough with coffee and a good book to start the day.

We saw several cows grazing on the way into Cave Falls, but ran into a wall of bovine blocking our way out. 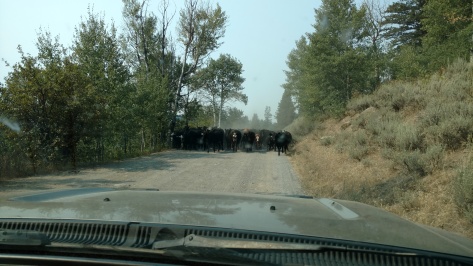 Cows are always a little weary of the Roamer so I just pulled over and turned it off until the lonesome cowboy and his two dogs drove the herd past. He offered a trade, his horse for the Roamer, and while his horse was a nice chestnut Pam said she doubted it could carry all of our stuff. He gave us a fire update on the smoke we saw the previous day that now blanketed the area, and then trotted on his way after the herd.

We continued south through Idaho to Palisades Reservoir and Calamity CG, near the Wyoming border. The reservoir is on the Snake River and is well below its highpoint that must have been a few years in the past.

A previous user of our campsite left a hummingbird feeder so Pam cleaned and refilled it. Pretty soon we had a lot of customers. The host knew the previous person so we left it there for her to give it back. 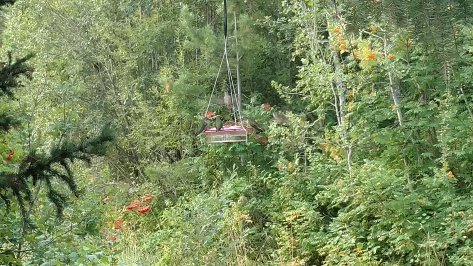 There was another forest fire about 20 miles west of this campground, near Idaho Falls. The winds were light, coming out of the north and predicted to stay that way through the night, but around 9pm a police officer knocked on our door and told us to be ready to evacuate if required. Luckily it was not required, but by the next morning the skies were filled with smoke.

We seemed to be blanketed in smoke throughout eastern Idaho and northwestern Wyoming so we decided to head for the blue skies over Fossil Butte NP and the more sparse vegetation in southwestern Wyoming.