With our truck back in working order we dropped into the Colorado side of Dinosaur National Monument where the Green and Yampa Rivers meet. We wanted to go down last year but the clay in the road makes it impassable when wet, and it was raining when we arrived.

This year, the sun was out and the skies were blue so we headed down the hill and into the beautiful valley.

The dirt road runs through the Yampa River valley to the east for 40 miles. 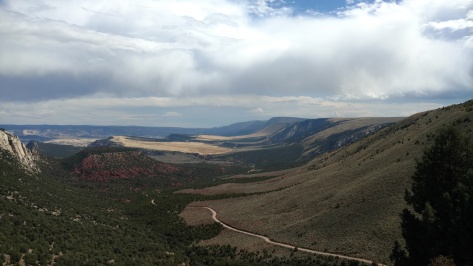 Once in the valley, we turned to where the rivers meet. The land near the river confluence was purchased when they made the national monument, and the original homestead buildings are still there. It’s a pretty spectacular place for a home, but it is nearly 100 miles from any town.

There are petroglyphs high up along the canyon walls from the Freemont Indians that date back a 1000 years when the canyon floor was 30 feet higher, washing out more with time to their current level.

We camped at Echo Park CG for the holiday weekend, along the Green River, just downstream from where the Yampa River joins. 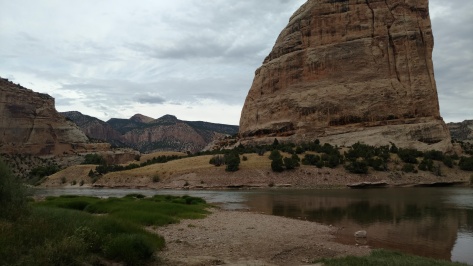 The campground sits at an 180 degree bend in the Green River. We hiked up both sides from the campground. The right side leads to the confluence of the Green and Yampa Rivers.

The left side is the outflow of the Green River into a beautiful canyon that continues into Utah and eventually joins the Colorado River. The campground is in the trees at the bend in the river and the road in is through the slot in the canyon wall.

Afternoon storms rolled in for the weekend so we left Echo Park after a couple of blustery nights. The Ranger suggested we not drive out the way we wanted on the 40-mile Yampa Bench Road due to the rain and the fact that we would probably rip the muddy road up pretty good with our rig, so we’ll have to come back at least one more time to do that route. We easily drove out the way we entered and camped the night at Steinaker State Park outside of Vernal, CO again. They too had a lot of rain, where a few campsites became mud washes, causing a change of plans for a few holiday tent campers and creating an open spot for us.

We met up with Lou and Nancy at Flaming Gorge, which is also the Green River about 50 miles upriver of Echo Park. They are now full time RVers and were arriving from a week or more of fishing and biking in the Grand Tetons area after selling their house. It was good to see them both again.

We all stayed at the Red Canyon CG, which is a beautiful spot right next to the rim. The campground was nearly empty being post-Labor Day and mid week. We were treated to some spectacular sunsets over the gorge after sharing some pretty good meals together.

We even caught a bighorn sheep family making their way over the rim at sunset. Their coats are the color of the rocks so you need to look closely to find them.

Lou and Nancy headed south on their next adventure while Pam and I followed the Green River downstream back into Colorado.

We drove the back roads along the Green River to John Jarvie’s Historic Ranch. Jarvie was a Scot who immigrated to the US and eventually opened a store along the Green River in the 1880s. His first house was a dugout that he later used to hide notorious outlaws and friends, like Butch Cassidy. While the outside doesn’t look like much, the inside was roomy and fully furnished with a kitchen, sitting room and bedroom.

He then built his home and store out of railroad ties that were floating down the Green River. The railroad company floated them down the river as an easy transportation means to get them where they needed for the railroad. I guess they never noticed the 100 or so missing ties that made his house. He was eventually shot by robbers in 1909, but his place marked the crossroads for this part of the country so it’s maintained now as an historic site on this beautiful spot of the river.

Just south of Jarvie’s Ranch is the north side of Dinosaur National Monument and the Gates of Lodore.

The Gates of Lodore is a beautiful rock canyon that the Green River cut through on its path south into the monument.

The campground there is also the launching point for rafting trips on the Green River. We saw a group heading out down the river while on a hike. 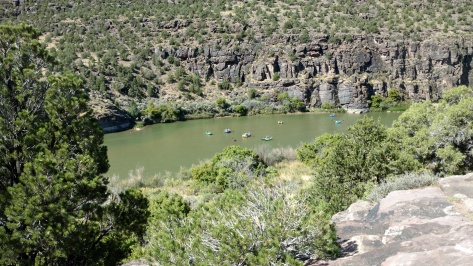 Maybe another river trip is in our future….

We also ran into the owners of another EarthRoamer there and got some great ideas for storage and organization. We then said goodbye to the Green River and headed north into Wyoming.