We left Buffalo and headed out of Wyoming down the front-range in the eastern part of the state. While it took nine days to get from the Colorado border to Buffalo, it only took 6 hours to drive down the interstate to get back to Colorado. It was our first long stretch of interstate driving the entire trip and neither of us liked it. 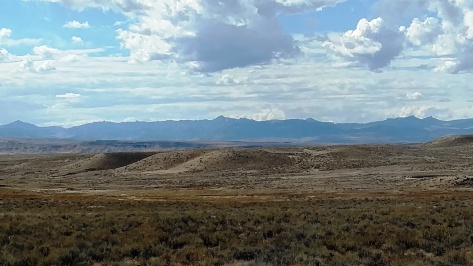 Since we had an appointment the following day for our rig in Dacono, CO, we took the interstate from Buffalo on south. The change in traffic as we crossed the border into Colorado surprised us both. You hit Cheyenne, the border and Fort Collins, CO fairly quickly, and cars seem to appear out of nowhere to create traffic when we have been used to the entire road to ourselves.

We made our way to St. Vrains State Park for the night, just north of Dacono. The campground is just a few miles from the EarthRoamer plant where we needed to have our yearly tune-up on the rig. It’s also a water habitat for thousands of birds so it makes for a good place to camp. The only drawback is its proximity to the freeway, but for a night it’s livable.

We were treated with a beautiful sunset over the Rockies to the west.

We had a few things fixed on the rig and added a couple of upgrades for another great trip to the EarthRoamer facility. It’s always great to chat with the friendly folks that work there.

A couple of reporters from the Colorado Springs Gazette were there doing a piece on the company. We got interviewed as one of the owners. Maybe we’ll be in the article. We also got to see the new HD vehicle being built – a 35 foot, F-750 chassis with 47 inch tires. It will the biggest, baddest vehicle in the back-country when it rolls out early next year.

We then headed southwest over the front-range and onto highway 285 that runs down through central Colorado. It’s a beautiful drive any time of year. Once over the first set of mountains the elevation in the huge valleys you drive though is about 9,000 feet, while you are surrounded by many of Colorado’s 14,000-foot peaks. We made our way to just north of Salida, CO and camped at the Ruby Mountain CG along the Arkansas Headwaters. 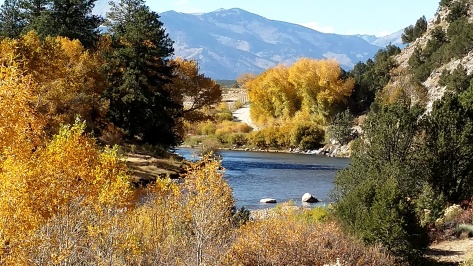 Over the past three years, we’ve added a few hundred pinstripes to the side of the vehicle in the process of pushing trees and bushes aside. We had our windows buffed out at the factory and the difference was startling. They look brand new and crystal clear.

The mountain peaks were all dusted in white when we woke in the morning and the air had a nice fall chill. We then had a huge driving day, which under normal travel conditions would have likely been 3 of 4 days, but we now had another appointment in Arizona that we needed to make.

We headed south and dropped down Wolf Creek Pass, which is a beautiful place if you don’t have to worry about the road down, and into Pagosa Springs for lunch. Riff Raff Brewery gets a big thumbs-up.

We then continued through the 4 corners area and into Navajo National Monument in northern Arizona. We had never been there before this year, but it is quickly becoming a favorite stop.

We were treated to a beautiful sunset to the west and a unique sunrise to the east during our stay.

We then drove south into Flagstaff, AZ. The aspen trees on the north side of the San Francisco Peaks are just starting to hit their full color.

We continued on to our next stop at the Orme School. Pam has board meetings that she needed to attend, which bounded our trip this year. The elevation of the school is about 4,000 feet, which makes it the lowest elevation we’ve been in the past 4 months.

After the meetings, we headed on back to the valley to end Epic Trip #3. We ran into a roundup along the road where a group of Wounded Warriors were at Orme to help with some of the ranch work.

Planning is already in works for our 2017 adventures. It will probably include a southern Gulf State trek to Florida and back in the first part of the year and then a northern US – southern Canada trip to the Maritimes and back, picking up the places we missed in Epic Trip #1.

Six months, ten states and three river trips made up this trek. Western US is a very beautiful place.