If you like interesting drives, ask Google Maps to give you a route and select “avoid highways” on the route option. It won’t be the quickest or easiest way to any destination, but it may turn out to be the most enjoyable.

We took off for San Francisco to visit with our eldest son, Tom, who now works in the city by the bay. Our first stop was Anza-Borrego Desert State Park, which lies east of San Diego and west of the Salton Sea. We passed by Glamis, CA and the North Algodones Dunes Wilderness Area. The dunes were covered with all kinds of sand vehicles, but the wind was also howling at about 30 mph so we didn’t stop. 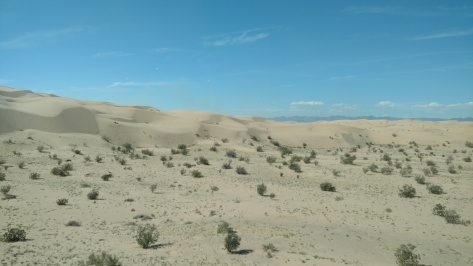 We camped the night along the Fish Creek wash. The primitive campground there was full so we just found a spot along the bank to spend a quiet night alone in the desert.

The next day we wanted to hike at the park in Borrego Springs, but it was packed with folks out for the weekend to see the Mojave Super-bloom. We didn’t see many flowers around, but we were a few hundred feet below sea level. However, around Borrego Springs were gigantic metal sculptures of all kinds that were very interesting to see instead. 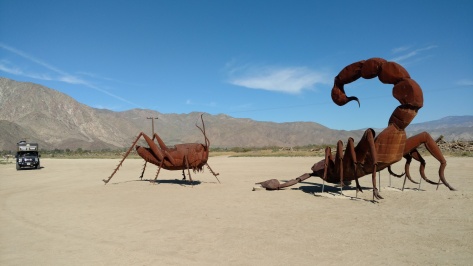 Rather than stick around until the crowds left we decided to make our way north around the east side of the Salton Sea, stopping at the Sonny Bono Salton Sea National Wildlife Refuge for a nice hike. You could still see the snow cap on the Mt San Jacinto above Palm Springs across the sea. 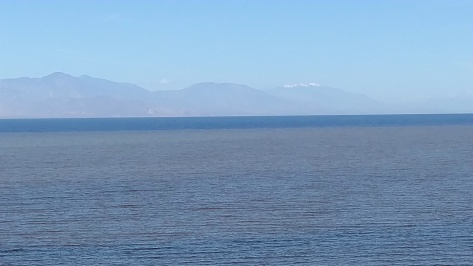 We ended up camping on the north shore of the Salton Sea for the night at Mecca Beach CG.

I always wondered where the Colorado River carried all the rock from the Grand Canyon. Thousands of years ago, the Gulf of California extended north all the way to where Palm Springs is today. The Colorado River dumped all that sediment south of there, creating the current north end of the Gulf. Over the last thousand years the northern section was then a huge lake, Lake Cahuilla, which rose and fell depending on the Colorado River flow. It eventually dried up in the 1300s, but in 1905 the Colorado River raged and blew through a few dams and levees, and for 18 months the river was effectively diverted to this area, creating the Salton Sea, until they fixed the dams. Most of this area is at least 100 feet below sea level and the Salton Sea is just a fraction of the size of the original Lake Cahuilla. There is some geology trivia for those that find it interesting.

We then headed north on a road that parallels I-10 and runs through Sky Valley and Desert Hot Springs, gaining altitude all the way out of the Coachella Valley. The drive was peaceful and beautiful, with snow visible on top of San Gorgonio Mountain and clouds attempting to roll over the rest of the San Bernardino mountains.

We camped the night at Sawtooth Canyon CG, a hidden BLM spot just south of Barstow, CA. Now at about 3500 feet, the Mojave desert was in bloom and greener than I ever remember.

We then drove across California through Bakersfield and Paso Robles. The area was lush with growth, both in the farms and along the grasslands, with flowers everywhere. 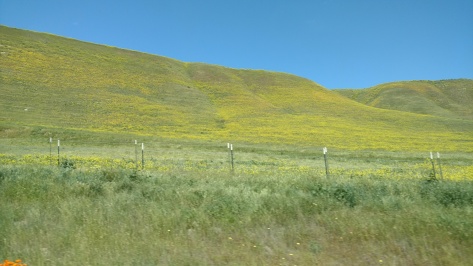 We hit the coast at Morro Bay , camped at Morro Strand State Beach CG, and headed into town for some good seafood.