We took to the road once again for a short trip to southern Utah and back. This trek had two goals: first, to provide logistic support for some friends who were going to backpack some canyons in Utah, and second, a final shakedown of the rig prior to our fourth summer adventure trek. Kirk and Kathy wanted to hike Buckskin Canyon near the Wave, and then Kane and Bullet Canyons in the Cedar Mesa area, now also the Bears Ears National Monument area. Weather is always hit and miss this time of year and you don’t want rain or the flash flooding that comes with it for either of these hikes. Therefore, Pam and I agreed to provide support for their hikes, mostly moving cars from entry to exit points and hot showers in the Roamer after the hikes. Our truck, with now nearly 70,000 miles on it, had its yearly service and a new set of tires – oh yeah!

After we left Phoenix and climbed up onto the Rim, it began to rain. We had a few hot days just before this so the cold rain created a cool fog along the road through the forest. 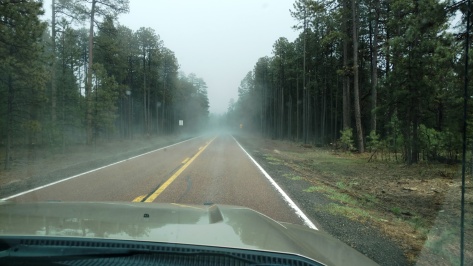 We drove Lake Mary Road to Flagstaff because it’s a much prettier drive that the Interstate. We passed by Mormon Lake and it had more water than I have ever seen. It was a good thing Overland Expo West moved its site this year from Mormon Lake or it would have been like a few years ago when everything was under water and mud. It was great fun to drive in, but folks camped in a few inches of water were not pleased. Pam looked for the 4-foot Common Crane that was blown off course from Russia and was spotted around Mormon Lake. We saw plenty of Egrets, but no Crane. 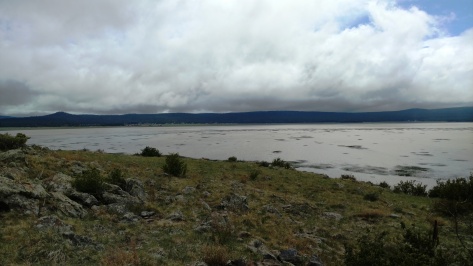 We met up with Kirk and Kathy and dispersed camped near Walnut Canyon National Monument, a small NM just outside of Flagstaff that most folks never see on their way to the Grand Canyon. It rained all evening and was suppose to snow, but the morning broke with crisp, clear blue skies and a nice view of the San Francisco peaks. 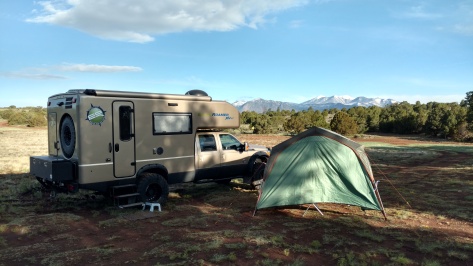 We did a short hike in Walnut Canyon in the morning since Kirk had never seen it before. There were many ruins along the canyon walls of the folks that lived here 1000 years ago. As it would turn out, this trip would be mostly about exploring canyon ruins. 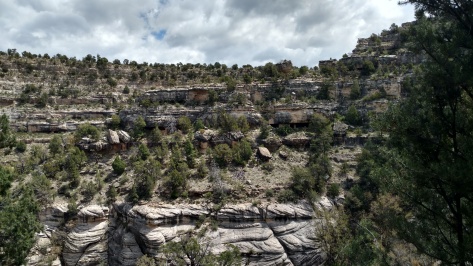 Given the rain that had fallen and the additional rain forecast for the intended hike in Buckskin Canyon, we changed our plans and did not drive the dirt and clay Rockhouse Road to Buckskin Canyon, but headed to Page, AZ instead. We stopped at Horseshoe Bend, where the Colorado River does nearly a 360 turn just below Glen Canyon Dam near Page before flowing down into the Grand Canyon.

The original plan was to head to Calf Creek CG just outside Boulder, UT after the Buckskin hike. The intent was to drive up Cottonwood Canyon Road, through the heart of Grand Staircase Escalante National Monument, but that road too is impassable when it rains due to the clay. Therefore, we drove an arc around Grand Staircase to the west, which got us out of the rain and we camped at Ponderosa Grove CG just outside Coral Pink Sand Dunes State Park. The campground was a nice, inexpensive Bureau of Land Management (BLM) campground, which is typical of BLM campgrounds.

The next morning we went to the Coral Pink Dunes and they are something to see.

The route around Grand Staircase takes you near Zion NP and Bryce Canyon NP, and you start to understand that southern Utah is a geological wonderland. The road between Escalante, UT and Boulder, UT runs through some pretty impressively, rugged country.

Calf Creek CG is tucked down into one of the rock canyons along this route. From the campsite you are always looking up to the beautiful walls that surround you.

We hiked along Calf Creek, up the canyon, where everything was green and in bloom from the winter and spring rains.

There were petroglyphs along the hike. Notice the three figures just above the crack along the base of the wall. The Freemont Indians made these about 1000 years ago.

The hike ends at the 140-foot tall fall. The water was snow-melt and very cold. 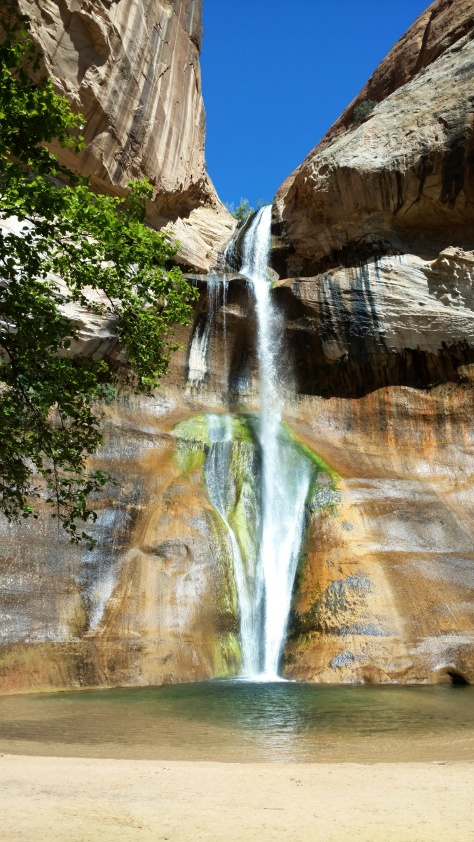 The road between Escalante and Boulder, through the rocks, was a relatively recent achievement. In the 1930s, the CCC constructed the first road between these two towns through the mountains and forest north of the current highway. The route had one interesting point where two deep canyons met to form a peak of a thin row of rock. The bridge built over this narrow rock section was aptly named. 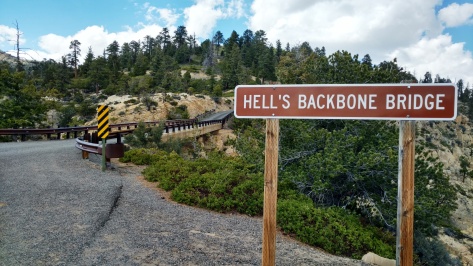 Pam and I camped up along this road last year, but the view from the bridge never gets old. A single camera shot just can’t do it justice.

As the sun set over the campground, the clouds turned pink in the fading light. 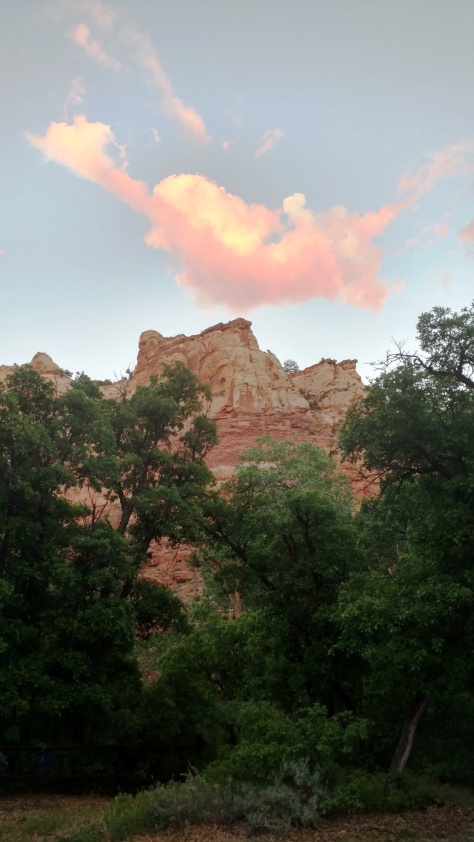 We have two cars for this trip so it opens up a new way of camping for us. We’ll keep the Roamer at Calf Creek and use the other vehicle to do explorations around the area. Stay tuned….