El Questro Station, where station is the Australian name for a ranch, is roughly 700,000 acres in size. The station is approximately 48 miles north-to-south, by 36 miles east-to-west. The stations in the Kimberley region are on leased “Crown Land”, which used to be held by the English Monarchy, but it’s now public land held by Western Australia. The initial lease for El Questro was in 1958. Before that date it was just outback wilderness. The lease changed hands many times over the years because you must meet lease payments and land improvement criteria to maintain the lease, which is tough to do in this remote area. However, in 1991 the lease holders expanded from just cattle to tourism due to the natural beauty of the area. El Questro still maintains nearly 6,000 head of cattle, but the tourism business model has rippled across many of the Kimberley region stations to generate additional revenue and to show land improvements in order to maintain the leases.

El Questro offers a range of camping options, from a basic campsite, to our tent wilderness camp and even a resort up on a mountain top. 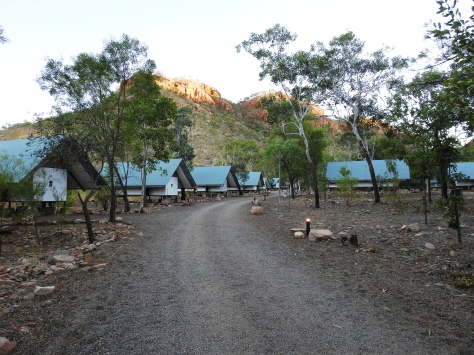 The wilderness camp at Emma Gorge was very nice and the common areas for meals and just hanging out were open-air and very comfortable. The meals we had there were buffet-style with a lot of really good food. A couple of tour groups like ours were there, but the dining hall was also filled with folks who were traveling alone, or as a family, and made their own reservations. 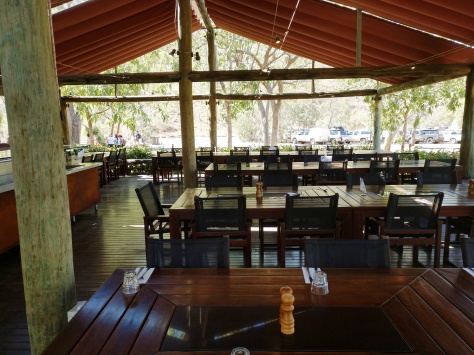 We hiked up Emma Gorge over large boulders and crossed the small stream several times. It was slow going for most of the folks and it was good we left near dawn, so we had the trail to ourselves. 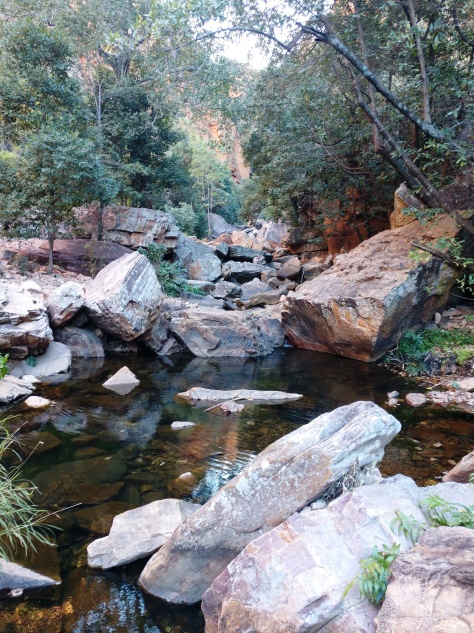 The gorge ends at a nice swimming hole at the base of a 65-foot waterfall. 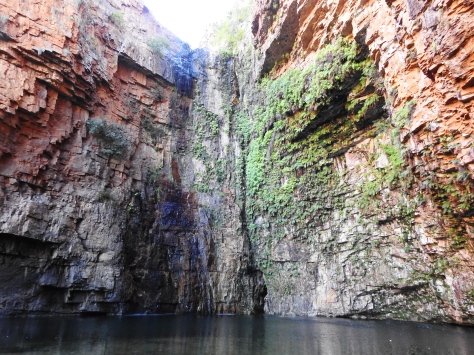 The water was refreshing, and Riley and I found the one warm spot near the outlet of the thermal spring under the rock overhang. 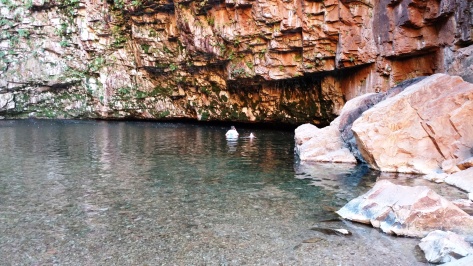 When we got back to camp, we jumped into our tour bus and were off again. This time I jumped in the front with Ray, our tour guide / driver. The bus had air ride seats in the front making the ride over any road condition noticeably smoother than the ride in the back. 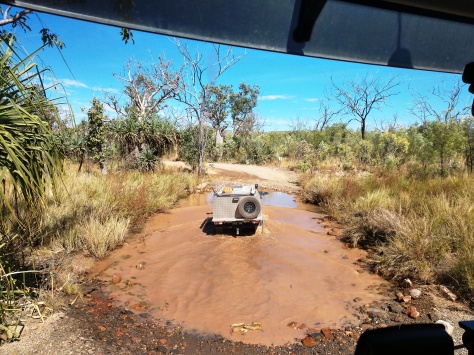 Even though it was the dry season there were still some rivers and creeks that had water and needed to be crossed. It was amazing that every Toyota land cruiser there had the engine snorkel kit installed. It must be for additional air inlet filtration of dust because the water in the region is either like this in the dry season, which doesn’t require a snorkel, or its 20 feet deep in the wet season, in which case a snorkel won’t matter. 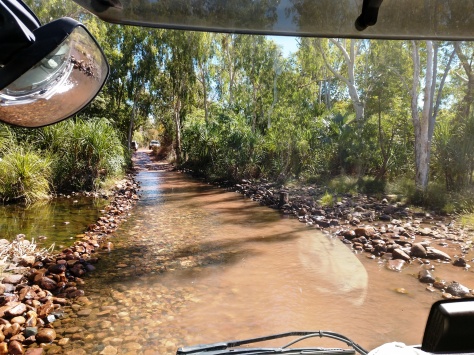 Our next stop was at a water reservoir while we waited for our appointed lunch time. 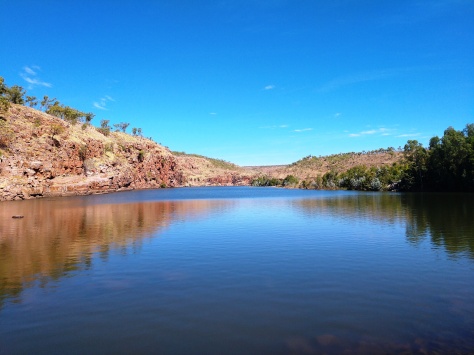 While the water looks harmless enough, nearly all water in this region is home to crocs. 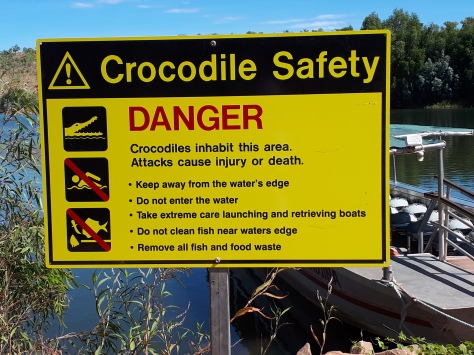 At lunch this blue-winged kookaburra came in looking for some free food. 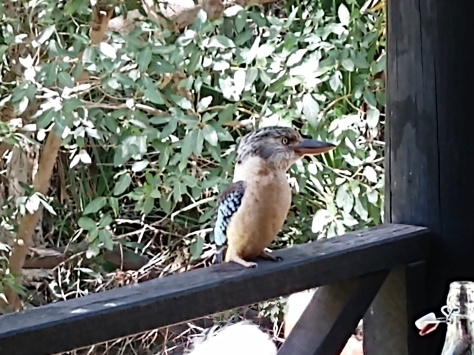 After lunch we headed to Zebedee Springs, a thermal stream that pools among the rocks and palms for a great place to relax. 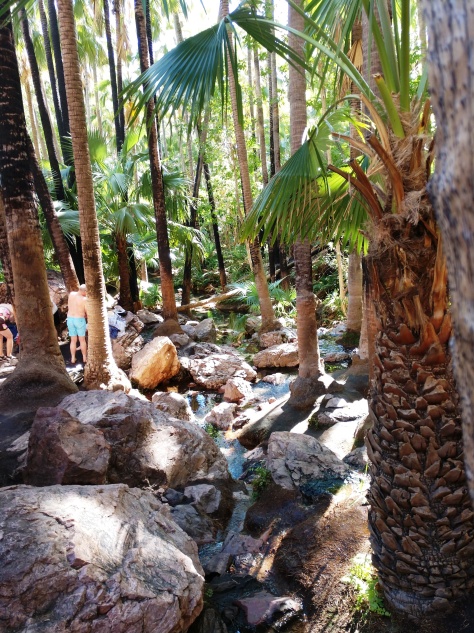 The palm-treed oasis was a striking change to the surrounding vegetation. 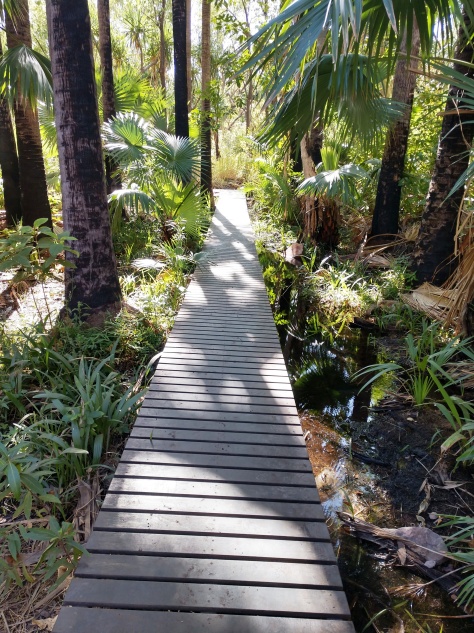 We watched the sunset glow its last light onto the Cockburn mountain range in the east. 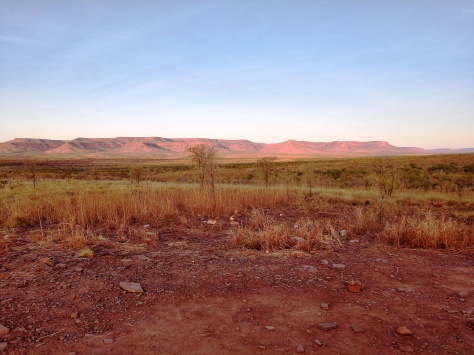 To the west, the sunset was beautiful. 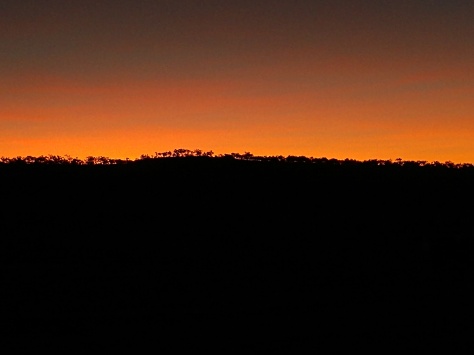 That night we stayed at Home Valley Station.