One of the things we found out about Western Australia is that there are no “coastal” roads. There are roads that look close to the coast but are several miles from the ocean. There is no Pacific Coast Highway equivalent where you are provided gorgeous views of the ocean as you drive along the coast. I guess it’s because there are not enough people to warrant such a road, given that an inland road is more practical.

Therefore, we looked for other things to see and do as we traveled along the “coast”. One such stop was the Valley of the Giants Tree Top Walk. Who wouldn’t stop there? The walk was on a series of suspension bridges that pass through a Red Tingle forest. The red tingles are the largest of the eucalyptus family and can grow up to 180 feet tall. 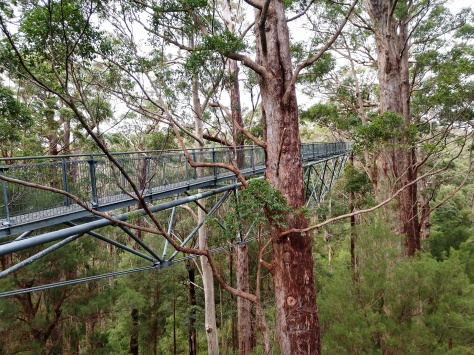 The walkway was about halfway up the trees. Looking down you realize how tall these trees really are, dwarfing the other normal sized trees. 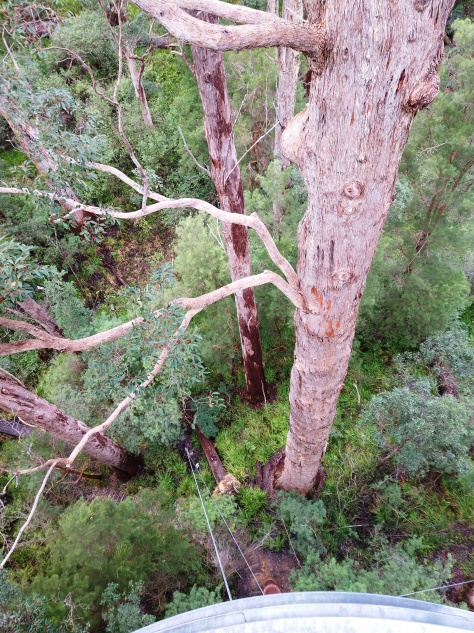 They have truck bases like redwoods that are 80 feet in circumference and prohibit growth near them to better survive fires. They live to about 400 years old and have a lot of character.

We made it to our next Airbnb in the town of Albany. Albany is the oldest city in Western Australia, being settled in 1826. It’s the second largest city in WA with a population of only 29,000, behind Perth with its population of 2.1 million. After some time in Western Australia you realize that once you get outside of Perth you effectively have the country to yourself, which is kind of nice. 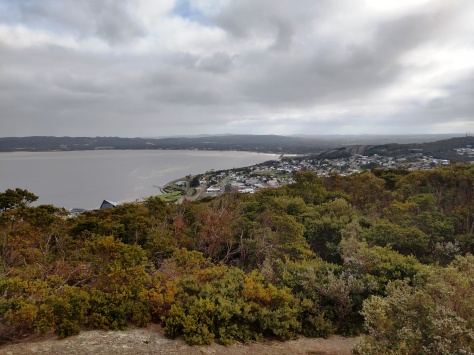 The city has a beautiful natural harbor, which is why it was settled first. It was the commercial shipping harbor between Europe and Western Australia for many years, causing some friction with Perth, which was the capital. It remained the primary sea hub for WA until the mouth of the Swan River was dredged in 1897 to create a commercial harbor at Fremantle, the port city of Perth.
We had a nice dinner at a fish and chips place near the beach, a short walk from our place. Most of the coastal cities have Cook Pine trees growing along the ocean. I imagine many of these were planted years ago with the expectation of having readily available ship’s masts to supply the many tall sailing ships that used to travel the seas.

Albany has a walking path along the ocean crest that Pam and I enjoyed. We stopped at one lookout but there was a guy with a sign that said, “ongoing research – do not disturb”. He turned and saw us and said don’t worry about the sign he was just finishing up. He was gathering observational data on a pod of Southern Right whales that were frolicking in the bay below us. He even let us use his scope to get a better look. He was from the University of Western Australia. When we told him about our travels and the dolphin that escorted us with her calf up in Monkey Mia, approximately 1000 miles away he knew the name of the dolphin and her calf.

It was encouraging to hear that humpback whales have come back from very low numbers to now over 40,000 in the area. Right whales don’t have offspring as often as humpbacks so while they too are rebounding in numbers it’s taking longer. He was taking data on the impact of the shipping traffic on the Right whale breeding habits. From what we saw through the scope it appears ship traffic was not affecting them – lol.

A historical plaque on the boardwalk talked about Darwin’s stay in Albany after his famous trip to the Galapagos Islands on the HMS Beagle. He was quoted as saying, “I leave your shores without sorrow or regret. We staid there eight days and I do not remember since leaving England having passed a more dull, uninterested time”. I guess Darwin was evolving socially during this period – lol.

On the hill overlooking Albany and King George Sound sits the Desert Mounted Corps memorial, a replica of the statue erected in the Suez to commemorate the Australian and New Zealand forces during WWI and their battles in the Middle East. 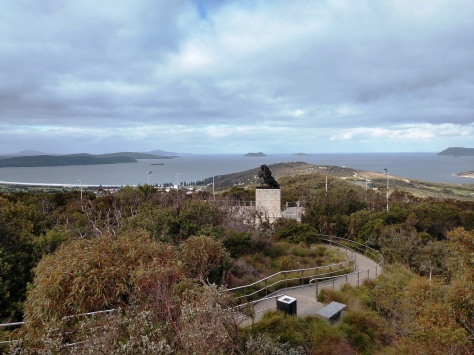 There are more WWI and WWII memorials on the hill that were quite interesting. Albany was chosen for the site because the convoy of ships that deployed to the wars assembled and departed from King George Sound.

Below is a memorial of the letters written home from soldiers. The “My Dearest Love” was cut through the plate so that the sun would shine through.

It was a nice stay in Albany, a place rich in history, but we had one more destination to the east before we would turn back to Perth.