Now it was nearly time to get back to Perth and catch our flight home. We decided to take a more direct inland route back to Perth with one more stop on the way back. Leaving Esperance, we traveled the same route until a little town of Ravensthorpe, where we turned inland. We had stopped at Ravensthorpe on the way to Esperance for gas and a bite to eat at a good restaurant in the town of 500 folks. We decided to eat there again on our way back.

If you have ever ordered a hamburger in Australia it comes with a pickled beet and sometimes a fried egg. I’m not a beet fan. I had a great fried chicken sandwich there on the way to Esperance but this time I felt like a burger. I ordered a burger, no beet with melted cheese, lettuce, tomato and mayonnaise and our waitress looked at me stunned. She wasn’t sure her husband, the cook, would do such a strange order – lol. He did and it tasted great. I think he agreed to do it because Pam likes the pickled beets and ordered a burger with a beet so he must have concluded that only half of the foreigners are weird.

We stopped for the night at Wave Rock, which like its name indicates is a rock that looks like a wave – a really, really big wave. 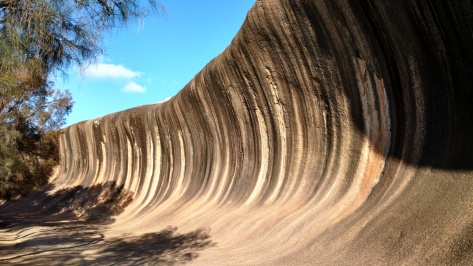 If you add a few people into the shot, you get a better appreciation of the size of the 45-foot tall wave.

There are other interesting rock formations there too, like Hippo Yawn rock. 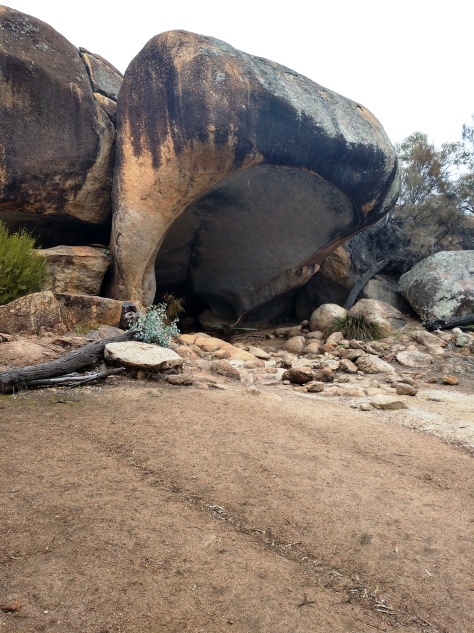 From on top of the wave rock formation you can look out and see for quite a distance given the relatively flat terrain in the area.

As is true everywhere, water is critical and small redirection dams were built at the top of the wave to capture rainwater in a reservoir next to the rock formation. The reservoir used to supply the nearby town of Hyden with all its water.

We drove a little bit north of Wave Rock to Mulka’s Cave the next day.

Mulka’s cave is part of the local aboriginal lore. Mulka was the illegal son of two aboriginals that were from the same skin color, or clan, and therefore should not have married and had kids. Mulka grew huge, but cross-eyed and therefore could not hunt. The legend then says he then turned to catching and eating local kids while living in the cave.

His handprints can be seen in the cave. They are much larger and higher up that a typical aboriginal person could reach. Personally, when I hear stories like these, I think that the village men or women wanted a place to hang out and not be bothered by kids. I doubt any aboriginal kids went near the place. It probably also had the effect of eliminating questionable marriages.

There are a few wetlands in the region that can be seen from on top of the hill behind the cave rock. 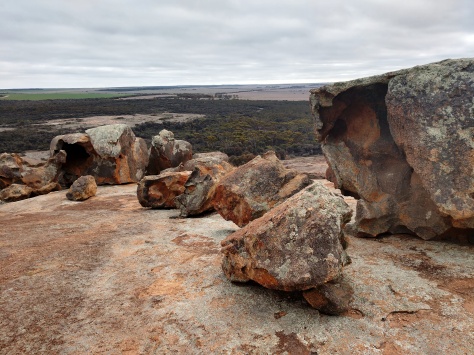 We continued west to a nice B&B in Fremantle for our last night in Australia.