As we continued north, we decided to drive to the Great Sand Dunes to camp for the night. However, when we arrived at the dunes the park campground was full. There is another campground down the road at the San Luis State Wildlife Area that was barely occupied so we stayed there for the night.

The next morning, we went back to the Great Sand Dunes National Park to hike around. The mountain runoff river that runs between the dunes and the visitor center was dry this time of year, giving access to the dunes. The 30 square miles of dunes reach up 800 feet at its maximum height but are dwarfed by the 14,000 foot Sangre de Christo mountain range to the north.

Pam and I have hiked several dunes during out travels and it always better to see them in early morning so you can see the tracks of the nighttime wildlife. We saw this mule deer track in the sand, and following the tracks, the deer was still in sight at the edge of the vegetation leading into the mountains.

After our sandy adventure, we drove just a little further north on HWY 285 to one of our favorite campsites, Ruby Mountain campground at the headwaters of the Arkansas River. We drove by a cluster of four mountain sheep along the dirt road leading to the campground. The three adults jumped the fence and came over to say hi. 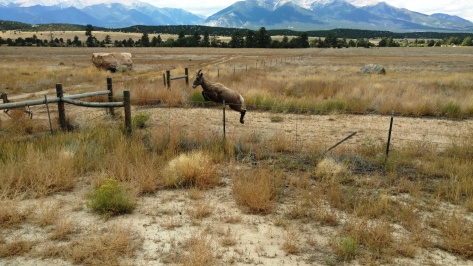 The smallest sheep couldn’t figure out how to get over the fence while the three adults visited with us in the Roamer. We drove off before the agitated small one did something stupid along the barbed wire fencing and hurt itself. I saw in the rearview mirror that it did jump the fence and join the adults as they made their way into the nearby hills.

The campground was a rarely used spot back in 2014 when we first discovered it on our first summer trek. You showed up, picked a spot at this first-come first-served campground, filled out an envelope, paid and relaxed in near total seclusion.

The surrounding area was then made into a National Monument with jeep and ATV trails into the hills beyond the campground. The campground itself got a huge face-lift with beautiful boulders lining the camp spots in the campground. The boat launch then became one of the busiest rafting launch points for busloads of folks wanting a little rafting whitewater from here down to Salida, CO.

The camp host recognized our rig from a couple of years ago when we pulled in this time. I asked which spots should we take and he said, “Do you have a reservation?”…… what! All campgrounds in Colorado now require online reservations.

After a few years of camping you accumulate accounts on nearly every camping reservation site. I had just made our reservations with the Colorado State Park folks for our upcoming stay in Denver, so I called them back and luckily scored a spot at Ruby Mountain for us for the next two days. 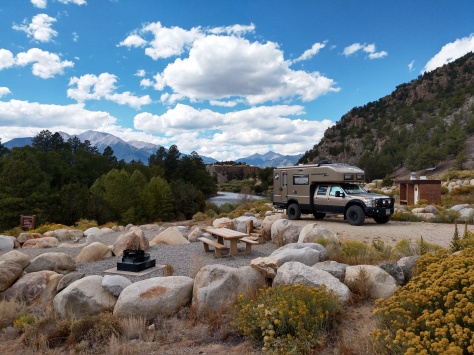 One of the things we wanted to do during this trip was to stop into Fruita, CO and visit with Lou and Nancy. Before leaving on the trip Lou and I traded e-mails that looked like meeting up with them going north or then south on our projected itinerary was not going to be easy due to business trips he had planned and weekend outings he and Nancy had already planned with other friends.

The last time we were at Ruby Mountain was with Lou and Nancy, since it’s one of their favorite spots too. I took a shot of our camp spot and texted it to Lou with the message, “guess where we are?” Less than 10 minutes later Lou and Nancy pulled into the campground in their FJ pulling a camping trailer they had rented for the weekend. They had reservations at the campground for the next two nights at the camp spot next to us. What are the chances?

We had a nice visit with Lou and Nancy, and always enjoy our time together in the outdoors. (Although, Fruita is a pretty cool town and a good place to live or visit.) We didn’t do any fishing due to the stiff wind, but we did do some hikes into the hills where you look onto the Collegiate Range. The Collegiate mountain range has nine peaks over 14,000 feet with names that include: Mt Harvard, Mt Princeton, Mt Yale, Mt Oxford and Mt Columbia. 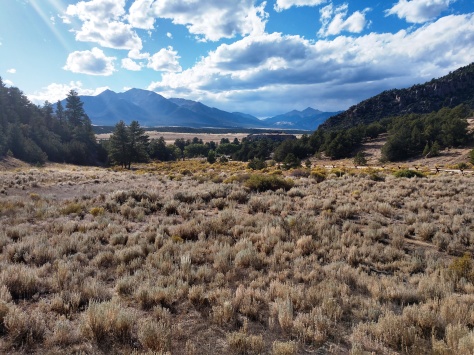 Lou and Nancy headed back to Fruita and although we wanted to stay there 3 nights, we could only get a reservation for two since it was fully booked. Therefore, I booked at another campground in the headwaters area for the final night. However, our host buddy knew our desire to stay so he said that someone with a reservation that was too late to cancel asked him to find someone to use it, which we did. We stayed there a third night before heading to Denver.

Another goal of this trip was to get a new set of tires in Denver, and to get a leaky rim on one of the tires fixed. We left Ruby Mountain and headed up HWY 285 into Golden, CO. There is a pizza place called Woody’s that is always worth a stop. Golden, typically a quiet little town, was packed with traffic when we arrived on a Sunday afternoon. The only place to park the Roamer was the Coors tour parking lot, seriously.

We took the tour, which was interesting and included a few beers. Coors now makes a few “Colorado Native” beers that are only available in Colorado. We picked up a sample case and the beers are good. They had a lot more flavor than Coors or the yellow water called Coors Light.

We camped at St Vrain State Park due to its proximity to the tire place. The Earthroamer facility farms out their tire work to a place down the street, or freeway in this case. The guys at BestDrive Commercial Tires did a great job installing new tires and ensuring no leaks in the split rims. They removed the external weights on the rims and balanced them instead with the ceramic beads inside the tires. Not sure which method works better. Both have their pluses and minuses. It would be nice to use both and get all the advantages, but I expect there’s a good change you would get all the bad issues combined. We’ll see how the beads work out for the next 20,000 miles with these new tires.

Sometimes when we get to a camp spot, we’ll find something left behind from a previous camper. At St Vrain I’m not sure if this little guy was left behind or if he is the camp spot guard. Nothing bad happened while we were camped there so I’m going with awesome guard.