We started our 2020 Roamer adventures with a short trip with Clark to Southern Arizona. Jill was out of town, so we kidnapped Clark, saving him from a boring weekend home alone. Our trip began with a visit to the Titan Missile Museum just south of Tucson. It’s a sobering Cold War experience in its technical construction and its devastating power. Its motto was “Peace through Deterrence”. By assuring mutual annihilation both the US and USSR existed in a stalemate for several decades following WWII.

There were 54 of these Titan II installations across the US, becoming operational in 1963 and keeping the peace by sites like these being on alert 24 hours a day, 7 days a week until their deactivation in 1987. This museum is the only installation left to remind us of the state of the world during the Cold War and what could have happened.

After descending 3 floors you enter the control and living quarters area of the facility by passing through two enormous blast doors that were designed to never be opened at the same time. 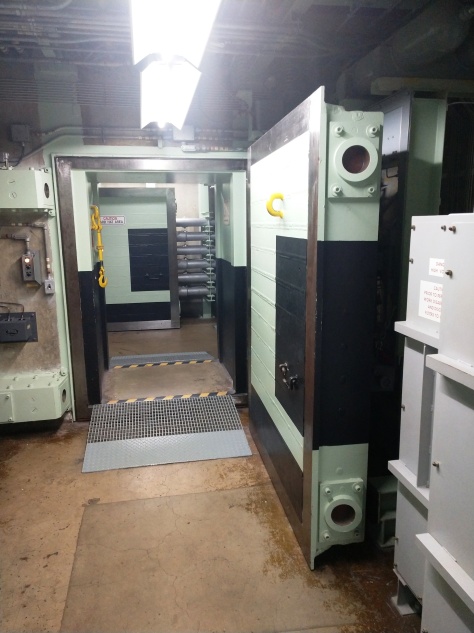 The control room was a flashback to 1960’s technology, but effective in its simplicity. A simulated launch was performed by the two-person crew it took to verify and launch a strike. After completing the verification of a legitimate launch command, the missile was airborne within 1 minute. All the systems have been de-classified except the three possible destinations that each missile site could strike. Even the operators who manned the sites never knew the destinations. 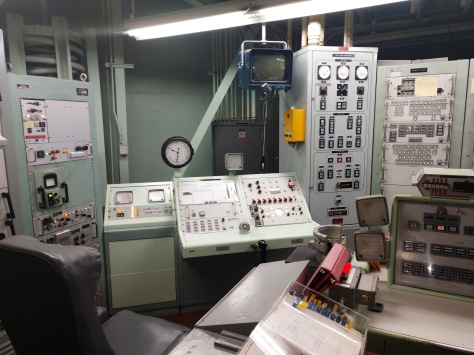 The hallway between the control center and the missile launch silo was suspended on springs to withstand the substantial ground movement near a nuclear strike. The blast doors and separation also provided the safety buffer for the crew in case of a missile fuel explosion during launch. 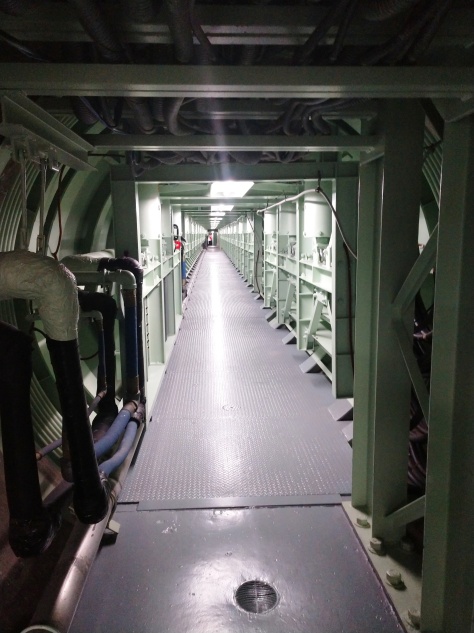 The Titan II missile bay was over 300 feet in height with acoustic and water suppression during launch that made its exit unnoticed by the crews in the control segment. The 103-foot missile carried a 9-megaton warhead to its intended destination up to 6,000 miles away. Our guide explained that if you filled a train boxcar with 9 megatons of TNT the resulting filled boxcars would extend from Tucson to the Canadian border. That’s a lot of TNT. The airburst mode would create a scorched earth patch of devastation 300 miles in diameter. The ground penetrating mode would vaporize the earth to create a crater nearly ½ mile in diameter. That doesn’t even include the additional devastating effects of the resulting EMP, radioactive fallout or seismic activity associated with a blast that large. The facility was designed to withstand everything but a direct hit. 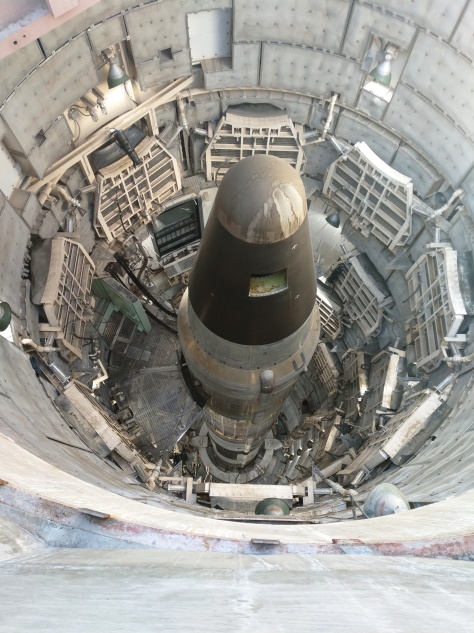 When the missile was developed and tested in the Pacific (without the warhead) the US did not hide the tests from the Soviets. The incredible accuracy of the system was witnessed by the Soviets so that they would understand the ramifications of its use.

In the gift shop I bought a card game called “Nuclear War – The Comic Cataclysmic Card Game of Global Destruction”. It was the fiftieth anniversary edition of the game and when we played it later at our campsite it was probably realistic in that nobody was left at the end of the game.

We had never camped on the west side of the Santa Rita Mountains in southern Arizona so after the Missile Museum we headed that way to find a spot. We ended up at Bog Springs Campground up in Madera Canyon, a very popular birding destination.

There were several sites open when we arrived early in the afternoon, but the one we chose was big enough for both our vehicles, so we squeezed into one site. 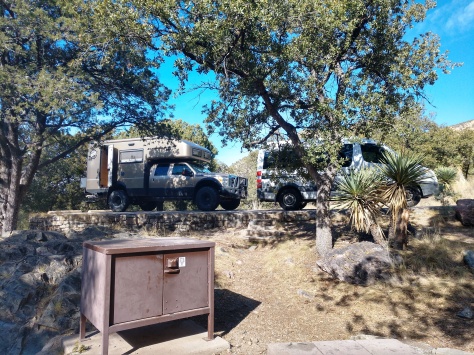 The campground filled up rapidly after we arrived. Usually the Rangers frown on two rigs in one spot, but the Ranger that stopped in to check up on us didn’t mind. It allowed for another person to grab a spot, so he was OK with us sharing a site in the filled campground. He asked if we had seen the wild turkeys yet, and shortly after he said that, they arrived. 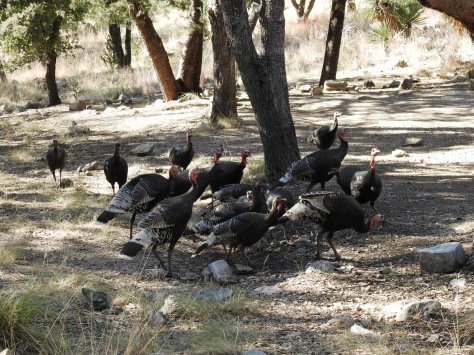 The turkeys were all in the 15 to 25-pound range and would leave and re-appear looking for any food in our site. The Ranger also gave us info on several more dispersed camping sites around the area to try on future trips.

One of the campsites had several bird feeders up to draw in a few of the special birds in this area. We had several Mexican Jays visit our site, but I couldn’t get a picture of one. They are a beautiful blue jay. Maybe next time I’ll get a shot.

There were many trails in the foothills around the camp, so we did a nice 5-mile loop that gained 1,900 feet up the side of the mountain. The weather was perfect for hiking. The loop through the Mt Wrightson Wilderness Area passed by three springs along the mountain side in the shade of some nice trees. 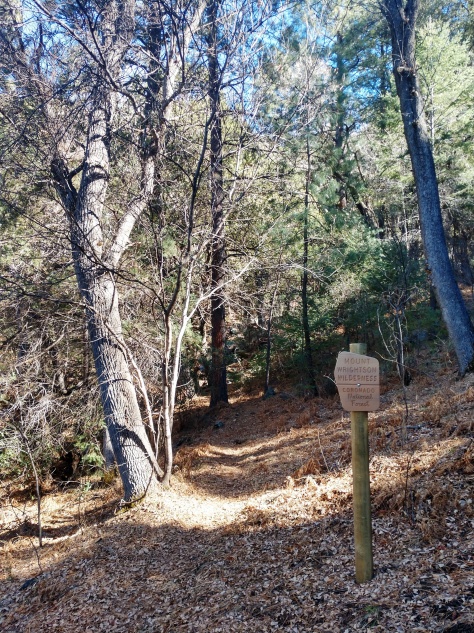 The view looking out over the Green Valley area of Arizona was spectacular. 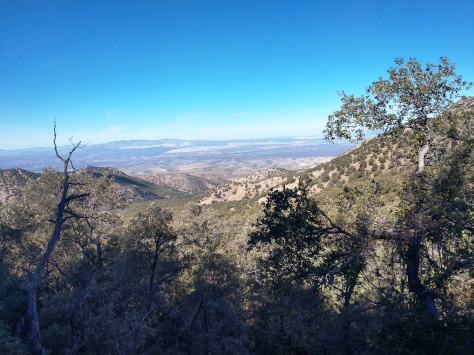 Mt Wrightson peaks out at 9,453 ft, and although we were only 20 miles from the border, it still had some snow in the shaded crevasses from the recent weather that passed through the region. The late afternoon sun made the rocky peak glow a nice color as seen from our campsite. 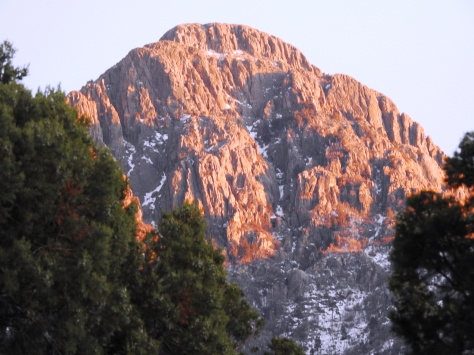 Clark had to head home after the long weekend, but Pam and I decided to make one more stop and visit the Arizona-Sonora Desert Museum on the way home. In addition to the beautiful desert flora and fauna on display at the museum, they have a raptor free-flight program where area raptors fly through the crowds for an incredible close-up view of these beautiful birds.

The first birds out were two Chihuahuan ravens. These smaller and more agile versions of the raven were impressive to watch. 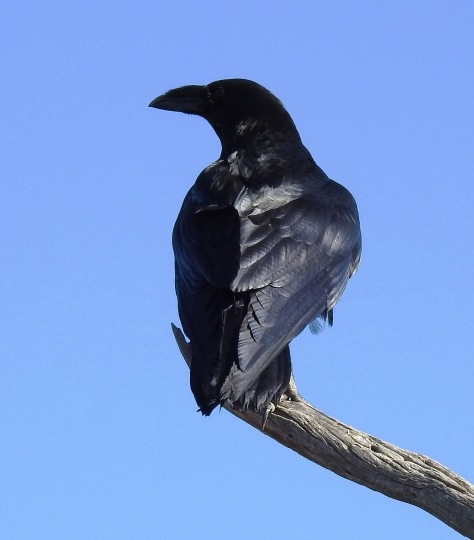 Next out was a female Great Horned owl. The huge bird was raised in captivity and she called out during the entire time looking for a response from the crowd who she takes for her family. 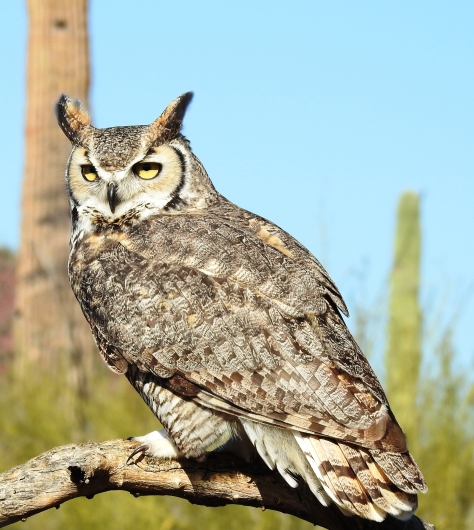 The third bird in the program was the Ferruginous hawk. It gets its name from its rust colored feathers that cover its wings and tail. Trainers on both sides of the crowd provide these birds with little morsels of meat as they swoop just above your head from one side to the other. 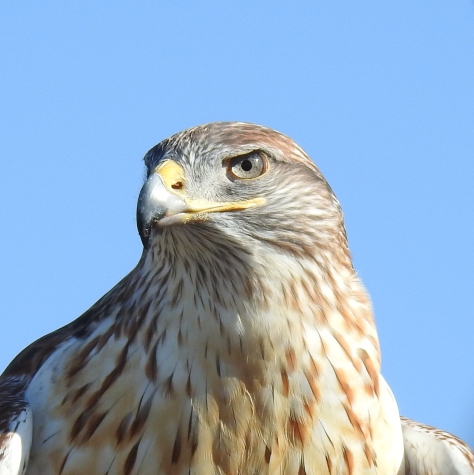 The last bird was the striking Crested Caracara. The juvenile bird’s neck was still light brown but will slowly turn to white at it matures. 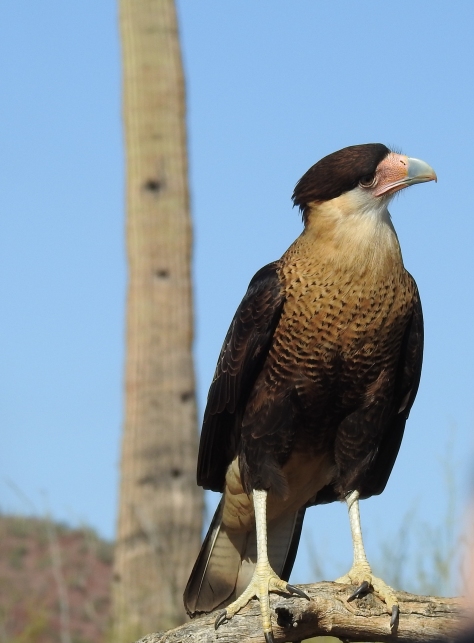 The raptors glide within inches of your head on their way to their next treat and head back to their home when they are full. It’s a great program to witness.

The bobcat and I had a stare-off contest. 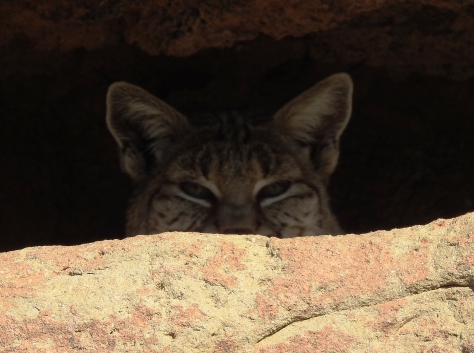 However, like most cats the need to take a nap won out. 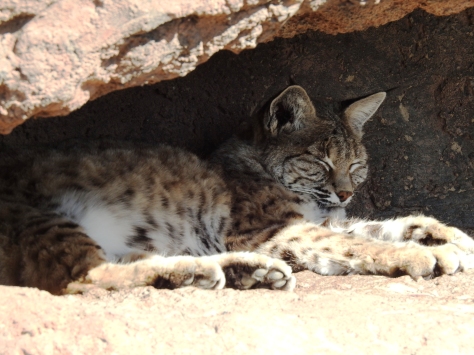 The had some big-horned sheep there too. At first, the big ram was so still I thought it was a statue. Then it moved and I saw its mate beside him on the rock. 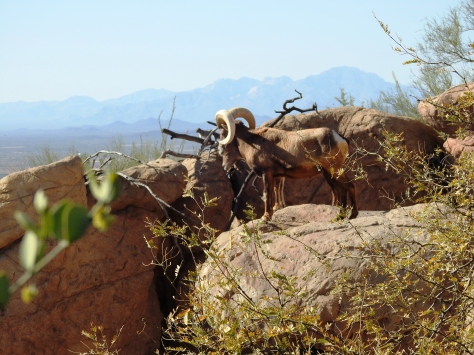 A broad-billed hummingbird was out enjoying the sunshine. 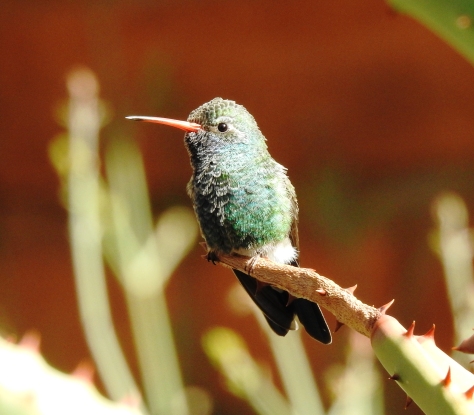 A rufous hummingbird was keeping a watchful eye on the nearest feeder. 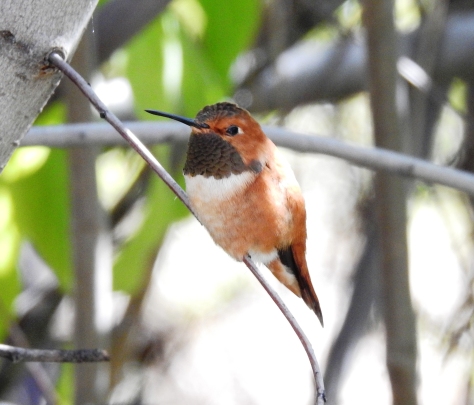 A female costa’s hummingbird stopped from feeding for a nice camera pose. 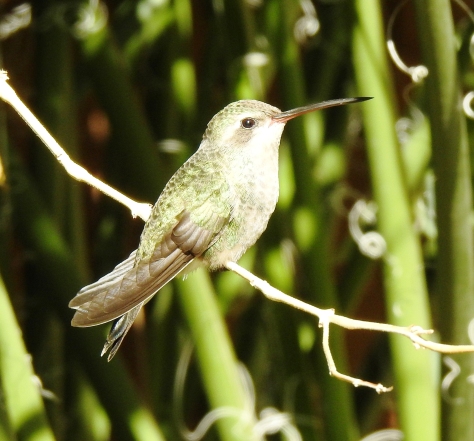 I also caught a monarch butterfly in the gardens.

It was a nice first trip for 2020 and we found a new camping spot that we will definitely return to in the future.