We headed out of the backcountry and the gnat-infested camping spot to Blanding, UT. We filled our rigs with gas and water and headed to the Edge of the Cedars State Park Museum. We’ve traveled through Blanding several times over the past few years but had never visited the museum.

The museum was incredible, especially when you consider that Blanding only has a population of 3,700 folks. Many of the artifacts that have been found in the region reside in the museum. There was an entire room of the pottery collected, representing the four major periods in native history they were created. The pottery also varied in color and patterns by the different people that inhabited the region.

The macaw feather sash ceremonial piece was carbon dated to 1150 AD, but still had the bright colors of the scarlet macaw feathers. Trade was extensive between the folks from this region with folks all the way down into Mexico, the home of the macaw, and folks along the Pacific coast who brought shells other items to trade. 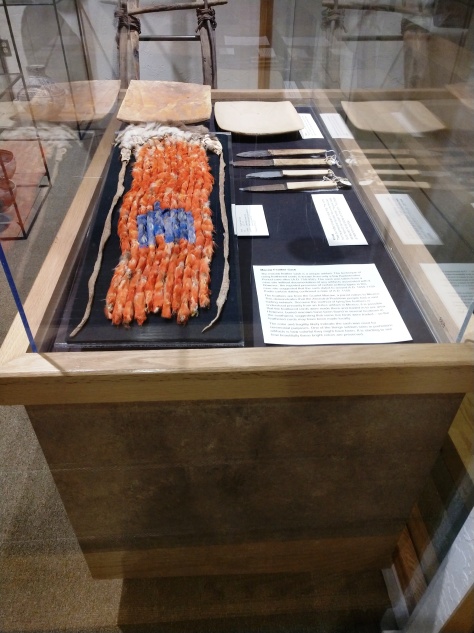 We then went to explore the “house on fire” ruins in the Bears Ears National Monument. The variation in color in the layers of sandstone give the appearance of flames above the ruins.

That night we headed back to Muley Point and another gorgeous happy-hour sunset.

The next day we visited Natural Bridges National Monument. Again, the visitor center and campground were closed, but the trails were open. We hiked down to the Sipapu Bridge overlook.

We then hiked down to the Kachina Bridge overlook. On the way we saw this tree that has somehow figured out how to grow out of a rock and survive. 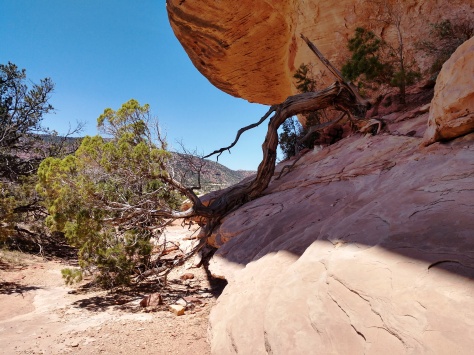 Kachina Bridge was named after the pictographs and petroglyphs of dancing kachina figures found on the base of the bridge. In 1992, 4,000 tons of sandstone fell from the inside of the bridge, making the opening slightly larger. It is just slightly smaller that Sipapu Bridge at 210 feet tall, 44 feet wide and 204 feet in span.

After our hikes, we headed west towards Hite, UT. Hwy 95 runs through Fry Canyon and some very colorful country. 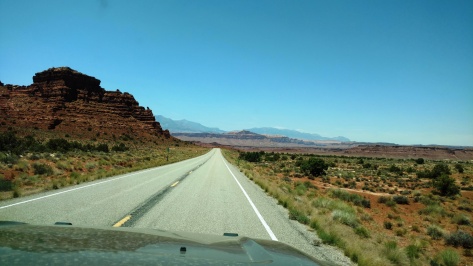 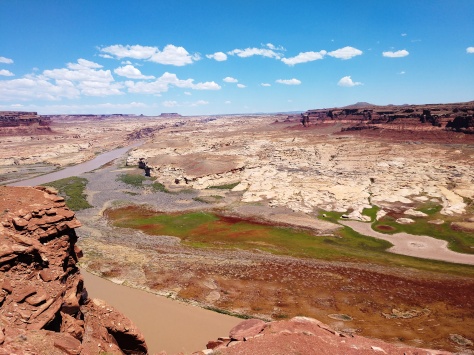 This is a view from the lookout of the Colorado River as it flows towards the Lake Powell entrance.

We turned south after Hite on the 276 Hwy towards Bullfrog, UT. Given the boat traffic on the road towards the marina at Bullfrog, I now realize that boat accidents occur because boat owners cannot drive on the road or in the water. Many must have a death wish as they try to get to the marina at maximum speed.

Before reaching Bullfrog, we turned west onto the Burr Trail, a 68-mile backcountry road that connects Bullfrog, UT with Boulder, UT. The drive is spectacular and is paved except for the section that runs through Capital Reef National Park.

At roughly 28 miles after the turn onto the Burr Trail you begin to see the “waterpocket fold”. This geological feature is made up of 100-foot layers of sedimentary rock that were bent into a 100-mile long colorful spine of rocks that formed 60 to 70 million years ago when the Rocky Mountains were uplifted and formed.

This is the approach to the Burr Trail switchback, a true dirt switchback that climbs up the face of the waterpocket fold. 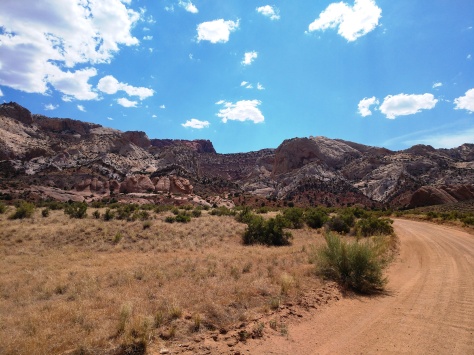 This shot is looking down the face of the waterpocket fold through the slot where the road enters the switchbacks.

Once on top of the switchbacks we began to look for a good camp spot for the night. We found a pull-off just before Long Canyon with an incredible backdrop provided by the local mountains. As the sun was setting, we noticed what looked like a forest fire smoke cloud dispersed across the sky, which are common in the summertime in the west. We did not have a connectivity signal to locate the fire, but I expected it to be from somewhere in the southwest of Utah near Bryce Canyon or the Sierras of California based on the wind direction. We did not know that the smoke meant that our last part of our itinerary was about to change.

When we do have connectivity on our travels I like to look ahead and see if there are interesting places to explore. A few days before, I found a posting for the Singing Canyon, a short slot canyon within Long Canyon that looked like a good stop.

The singing canyon gets its name from the acoustics within the short canyon. It was a nice morning stop and short hike into the beautiful slot canyon.

Before reaching Boulder and the end of the Burr Trail, we stopped for another hike on an interesting sandstone hill. The hill is covered with shattered rocks that appear to have a lot of iron content. It looks like thousands of volcanic iron balls were launched in the air during an eruption many years ago, cooled in the air and then shattered on impact with the sandstone.

We finally made it to Boulder and got some gas at one of our favorite stops in Boulder. When we were there last a couple of years ago, we signed a petition so that they could get support for a liquor license. The closest beer or liquor was an hour away. The little market now has beer and liquor – yeah!

Boulder, a small but very pleasant town, also has a museum we had not visited before. The Anasazi State Park Museum was a surprisingly nice museum with some excavated ruins of an ancient community in the back that you could see.

The museum also had a taco truck in the parking lot. We ordered lunch there while we listened to a band that was playing on their lawn. It was the first “dining out” Pam and I had done since the beginning of the COVID panic in early March. The tacos and the band were good. Hopefully, things will return to normal soon. 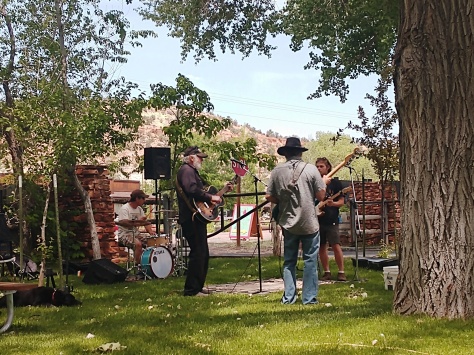 The bridge’s location is the “backbone” where two gorges, the Death Hollows gorge on one side and the San Creek gorge on the other, fall off for 1000 feet or more. To build the original bridge the CCC felled two huge ponderosa trees to span the gap. A bulldozer driver, “Sixty” McInelly, moved the construction equipment across the fallen tree span with just a rope tied around his waist in case the dozer went over. OSHA was obviously created after the CCC – lol.

The original bridge held until the 1960s when folks became worried about the groans and creaks it made during each crossing. It was replaced with a steel and concrete bridge and then update to today’s bridge in 2005. The 360-view from the bridge is spectacular and photos just do not adequately capture the place.

We were able to get the last spot in Blue Spruce Campground along the Hell’s Backbone road, squeezing all three rigs into the single spot. The elevation of the campground is roughly 7,800 feet, and therefore, back into the cool forest.

There was a nice stream that ran next the campground.

Being out first campground for this trip, it was also our first campsite picnic table. Jill pulled out their tablecloth for the site’s picnic table. The pink and turquoise flamingoes were perfect.

During the night Clark and Jill picked up another passenger, a mouse that had obviously spent the night chewing through their paper products. It could not be found within the rig, even after the removal of many items, and so we left the site with a possible stow-away.

We stopped in at Posey Lake for lunch along the route to Escalante. 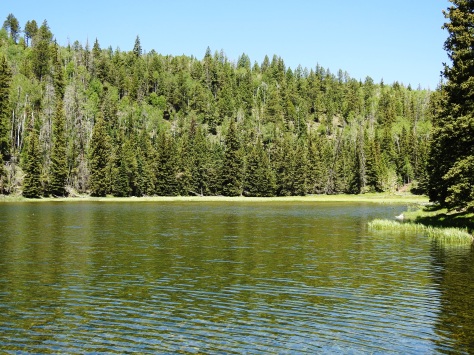 There were a few Ruddy Ducks on the lake, which are a colorful bird with a light blue beak. 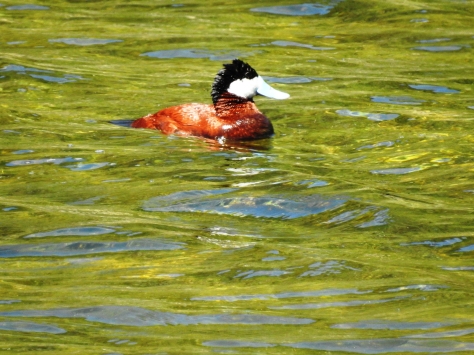 Two fishermen headed out with a canoe and a cooler outrigger that one of the guy’s brothers had fabricated. The PVC structure looked like it worked well. We saw them pull in a few rainbow trout while the coolers provided easy access to food and beer while they were out on the water.

We made it to Escalante, UT and did some laundry at a local campground. We had connectivity again in town and found out that the forest fire smoke was from the Mangum Fire located near the north rim of the Grand Canyon National Park. That was to be our last campsite area for this trip so a change in plans would be required.