We did a good hike in Arches, but Pam got a little over-roasted and needed to cool down the rest of the day. We then left Arches yesterday and headed up to Kamas, UT and the Uinta-Wasatch-Cache National Forest to meet up with Allan (Pam’s brother) and his two kids. The drive there was very nice (stopped for dinosaur tracks along the way), but seemed to be all up hill past the various reservoirs and through the passes. Strawberry Reservoir was beautiful and covered with white pelicans. Who knew? After meeting up with Allan, we picked a camping spot near Alexander Lake off 041 and Hwy 150. You can see why it is called the mirror lake rec area. 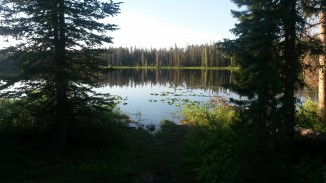 The Roamer however, blew out a turbo charger sensor valve that spewed out some hot exhaust gas under the hood and melted the windshield wiper fluid lines. This required duct tape and wire to hold the spring-loaded valve together so that we were not stranded in the forest. The vehicle is now in a Salt Lake City Ford fleet service center under repair (under warranty thankfully). The service tech stated those words that you know this is going to take some time to fix – ” huh, never seen that before”. It still drove ok, but in the engine degrade mode the Roamer is not as nimble as it typically is for its size. Zero to 60 in about a minute or two.

Unfortunately, the service lot is riddled with every RV that died on the highway over the holiday weekend, and in the service queue in front of ours. I think we should get a higher queue rating seeing that we made it there under our own power. However, I guess this is the beauty of being retired, there is no schedule. Luckily Allan lives in SLC so Pam and I have a place to stay until we can hit the road again, possibly Wednesday.

After being in the heat of Arches, the lake was a very nice change. Rowan, Allan’s 7-year-old son, had his new compound bow with him. I showed him how to use it and after a few hours it was clear that the old tree stump would not live again. We never lost an arrow, which given the lush area where we were shooting was pretty good.

We also found what we think is the lost dog that was posted on a few paper plates along the road to the lake. It was a big, old, white Great Pyrenees that was literally on its last legs after a week lost in the woods. It wandered into camp early this morning. I fed it some food since it looked like it had missed a few meals recently. It then walked off into the woods, but Allan tracked it down where it had crumpled in a stream bed not too far away. We lifted it into Allan’s truck and brought it back to Allan’s place (he has two big dogs that also came camping – Maizey and Nali) and we are waiting to hear from its owner soon. 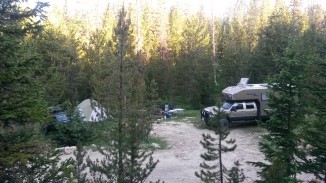