We were in a connectivity dead zone since leaving Anchorage a few weeks ago. We don’t have a Canadian data plan for our phones, and it really wouldn’t have mattered because there was no signal throughout most of our route through the Yukon, NWT and northern BC. We’ve been stopping into diners (eating poutine) and staying at campgrounds with free WiFi every once in a while to catch up on some emails, but most of those networks were so weak on data rates that uploading a blog was not possible.

Heck, most of the towns we’ve passed through until central BC have their own electrical generators because there is no electricity coming in from a large nearby power plant. A huge powerline system is now being erected up into northern BC to power some mining operations, which will now provide power to many of these smaller towns along the way too – progress.

In one of the diners along the way that had a TV, we saw that the northwest forests are burning, which is a shame since there is so much water up here in the rivers, lakes and even in the recent weather. Clouds bunch up and it rains, and then the clouds break apart for a nice partially blue sky day. This cycle repeats itself every few hours so every day will be both sunny and rainy. The benefit of this pattern is that rainbows will appear during the transition. 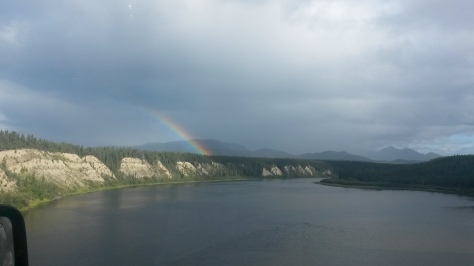 The Yukon Territory, which is larger than California, has a population of less than 40,000 people. Can you imagine California with only 40,000 people? The NWT, which is about one and a half the size of Texas has a population just over 40,000. Therefore, there is a lot of open country up here.
In fact, the maps we have don’t even have a dedicated page for each of the roads in the Yukon, NWT or the top half of Alberta or BC because there are so few roads one page easily covers them all. One guy we were talking to summed up how remote you are here – if you have an accident up here, they will just put yellow tape around your car on the road and it maybe days or even weeks before one of the few tow trucks is available to move it. However, it’s such a beautiful place and full of frontier type opportunities that it makes me wonder how bad can the winters really be?

Southern Yukon has a large Tlingit native population, the same native clans that inhabit Sitka and Juneau. These clans traveled inland to hunt and trap, providing many of the furs for the early Russian and American traders. We visited a couple of their museums in the area. 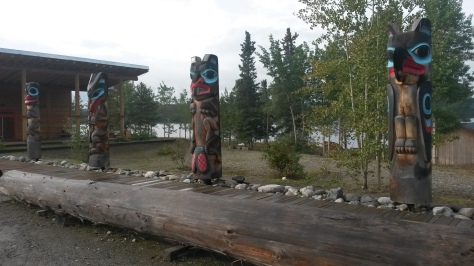 One Tlingit native named George Johnston was a really interesting guy, and something of a visionary. He bought the first camera and the first car in the area back in the 1920s with his fur trading profits. He learned to develop his own pictures and they recorded the daily life of the proud clans prior to all of the transitions that the Alaskan Highway construction and missionaries brought to their way of live in the 1940s. There were no roads in his village when he bought the car. He and a few buds cut a path of 3 miles through the forest to create a road, but mostly he used the car in the winter to drive and hunt across the huge frozen lakes in the area. The section of road they did cut became part of the Alaskan Highway when it rolled through this area. 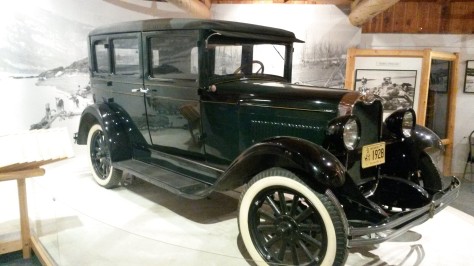 We left the Yukon, dropped into British Columbia and headed down the Cassiar Highway on the western side of BC. The Yukon provincial campsites we stayed at were very nice. They all cost $12 and even provide free fire wood.

Once in BC we stopped for the night at Boya Lake, a BC Provincial campground. The BC campgrounds cost $18 a night, no fire wood, but they do have a host that will visit and chat. The lake was a glacier run-off created lake where the bottom is the settled white glacier granite powder. The water was extremely clear, possibly because the powder prevents vegetation growth in the lake. The lake appears as about every shade of blue depending upon the depth and the amount of sunlight due to the reflective white bottom. We camped next to a couple from Vancouver that have been coming to the lake for the past 24 years to paddle this lake and portage into the nearby lakes in their two person kayak. Pam and I need kayaks, or a boat. I think I discussed this last year when we hit Minnesota. Mounting it or them to the Roamer will be the trick. 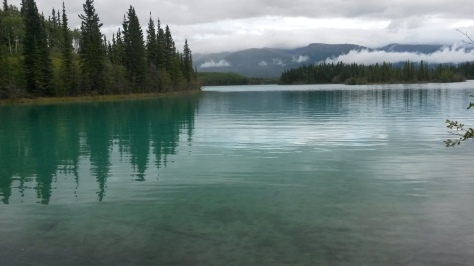 Heading further south we ran into several stores along the highway that you have to stop and visit because they are the only thing along the road for many, many miles. One had everything from $1 tourist magnets to $20,000 diamond earrings. His rationale was that folks stop in there driving $500,000+ RVs and obviously have some disposable income, so you never know. Another store was in jade country and had some amazing pieces of boulder-size raw and finished jade rock. 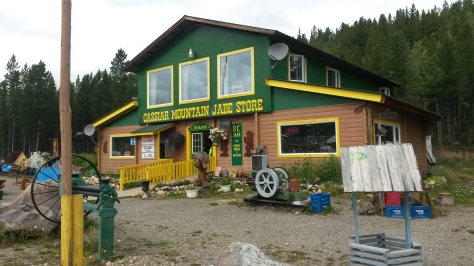 The road through this section of BC is beautiful. The place is thick with forest and bears. We saw several black bears like this just sitting along the side of the road, eating berries and grass. 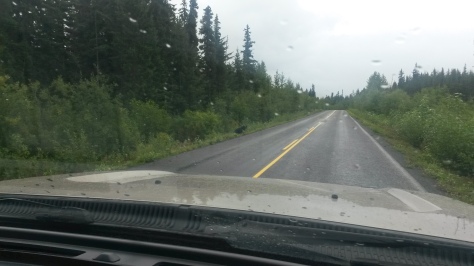 We camped at another BC park named Kinaskan Lake, another beautiful lake and another reason to have kayaks. Since we don’t have kayaks, we watched the lake traffic from the shore in our Bass Pro Shop zero-gravity lounge chairs (a must for any long trip or serious lounging). The traffic included a couple of float planes doing take-offs and landings, several kayakers, a few fishermen in their blown-up rowing boats (do fishermen ever snag their inflatable boats with their hooks?), four huge rolls of hay being barged across the lake by a couple and a dog using a 10 hp outboard motor on a very small aluminum boat (not moving very fast), and also a new bird – the surf scooter or skunk head duck, given the name due to its white streak on the back of its black head – lifer. 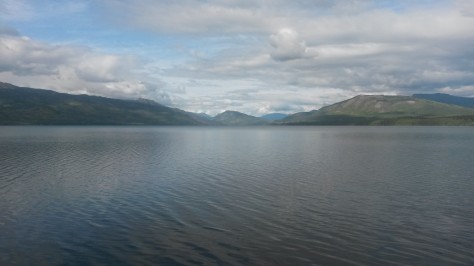 We then departed the Cassiar Highway for a coastal side adventure to Stewart, BC and Hyder, AK. Hyder is known as the place to see bears stream-feeding on the spawning salmon, and it is only accessible by a road through Stewart. It’s interesting that the land-locked Hyder does not have a border crossing station coming into the US from Stewart, but the Canadians have a station when you re-enter Canada from Hyder. This is the Canadian station on the bend as you leave Hyder. 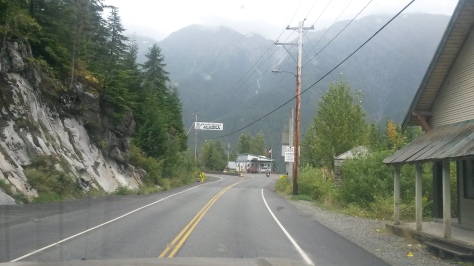 The Canadian border guard caught us off guard when she asked, “what do you have in the back?” I felt like saying the same stuff we had a couple of hours ago when we crossed over, but realized that may not lead to a good afternoon.

While they tell you about the bears and the spawning salmon in Hyder, what they don’t tell you about is the smell of the dead salmon. The stream was filled with nearly a hundred 3-foot long chum salmon spawning in pairs, but there was an equal number of partially eaten or spawned and died salmon along the banks of the river, offering some easy food for the seagulls. 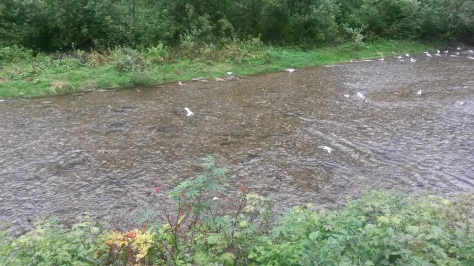 There is a dirt road out of Hyder that actually runs back into BC (no border guards in either direction for this crossing) up through the mountains to the Salmon Glacier. 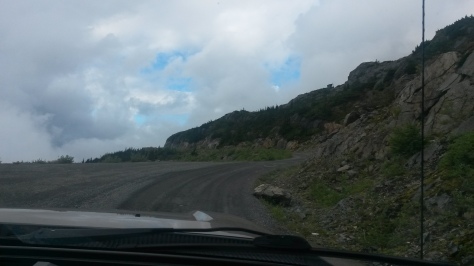 It began to rain as we drove up the mountain. We sat at the glacier viewpoint in the clouds for about an hour having lunch, and we were just about to leave when the clouds parted in the valley below. 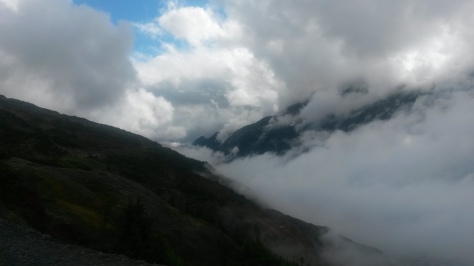 Just the end of the Salmon Glacier was visible. The rest of the glacier and the ice field above were still blanketed with clouds. 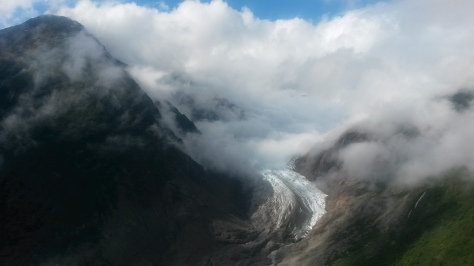 One person at the top suggested we continue on over the hill and into the next valley with our rig. It looked very tempting, but we’ll save that for the next trip. 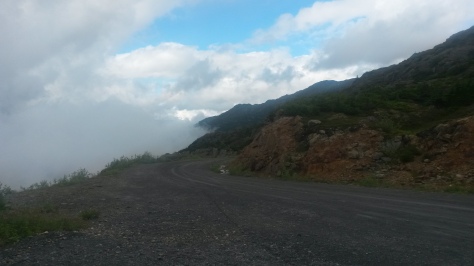 We drove back down to Hyder where the bear viewing area was located. There is a boardwalk viewing deck along the river to see the bears, which eat in the morning and evening. We talked to a couple that had been there the last couple of days and found out we would be waiting a few hours for any sighting. Given the screeching seagulls and the dead fish smell that engulfed the area we decided that maybe we’ll see the bears eat salmon next time. 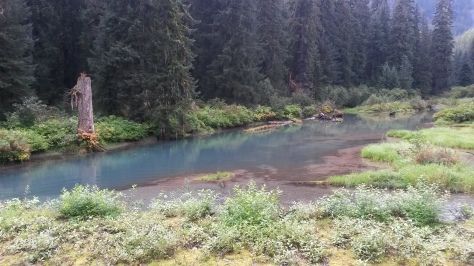 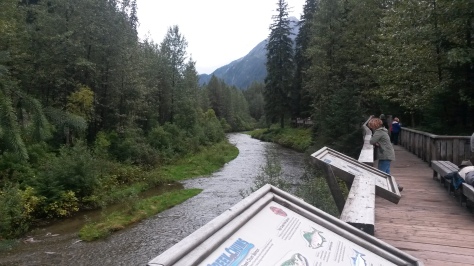 We camped in Stewart for the night and headed back to the Cassiar Highway in the morning. We hit the end of the Cassiar Highway at the junction of the Yellowhead Highway, which runs from Prince Rupert on the coast to Edmonton, Alberta. We turned towards Prince Rupert and headed for the coast once again.
The road into Prince Rupert has some spectacular sections like this tight canyon next to the river. As we approached the coast the clouds rolled in and we were reminded once again that it is a coastal rain forest. 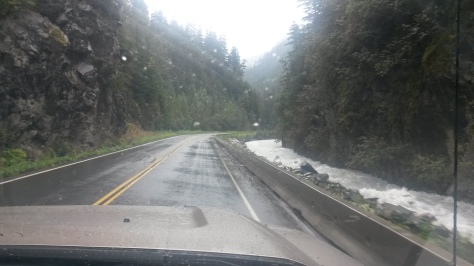 Prince Rupert was a neat little town. Since it has a cruise ship dock it does cater to the tourist crowds. Similar to Seward, many of the buildings had murals. Notice the door on the third floor above the fluke. That’s a whale of a first step – lol. 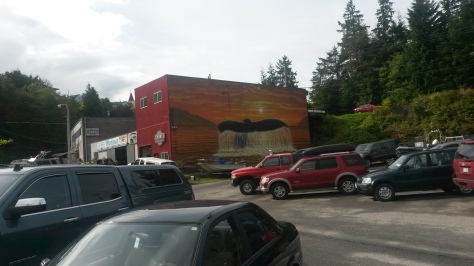 The area along the coast was very lush and beautiful. 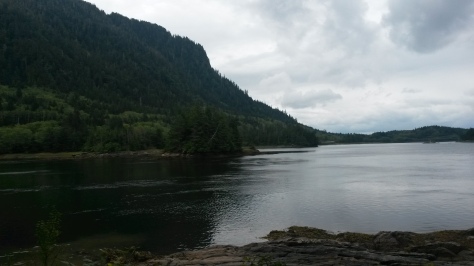 We toured a historic North Pacific Salmon canning plant in Port Edward, just outside of Prince Rupert. It was interesting to read about the typical transition from native and immigrant workers to mechanical automation to market crash and the impact each had on the local town. The cannery is in the midst of being renovated and there was a lot of interesting equipment inside, but no anvils. 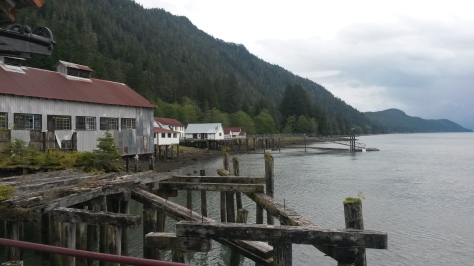 We left Prince Rupert and headed towards Prince George, located near the geographical center of BC. Driving along the Yellowhead Highway we both realized that we were no longer in the wilderness. We passed many hay fields, cows and even power poles along the highway on our way to Prince George, things we hadn’t seen since we left Bellingham. It appears this highway is the dividing line for BC, north of the highway is wilderness with a mostly migratory population, south of the highway is year around civilization.

Our next stops are Jasper and Banff. Neither of us has ever been there so it will be exciting to see the beauty so many have told us about. The Northwest forest fire smoke has choked the sky over Missoula and Calgary. We’ll see how much further north the smoke goes as we approach Jasper.