After the canoe trip down the Missouri River we decided to stay in Missoula for the week because Pam’s birthday was coming up at just about the same time James McMurtry was playing at the Top Hat Lounge again. The show was great. The warm-up band, Ticket Sauce, some young college kids, rocked Hendrix’s version of Izabella and other blues songs. McMurtry played late into the night and we had an awesome spot for the entire show. Getting to bed at 2am and up early the next morning used to be a lot easier.

We had a delicious dinner at Holland Lake lodge at sunset. 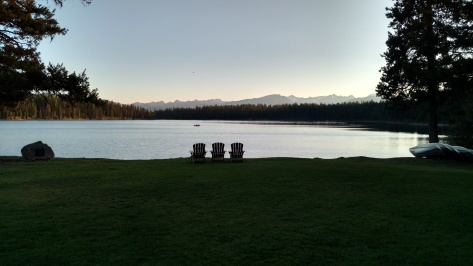 Pam and I took off again to explore the northwest part of Montana. It’s a very beautiful, mountainous region with a lot of lakes and rivers. We camped the first night along the Flathead River. It rained that night and there is nothing better than sleeping in the Roamer during a nice rain, unless maybe near a babbling brook.

The next day we visited the Ross Cedar Grove, which is a hidden grove of old growth cedars that are just incredible to see. They tower up 200 feet tall and the entire forest looks like a lush wonderland. 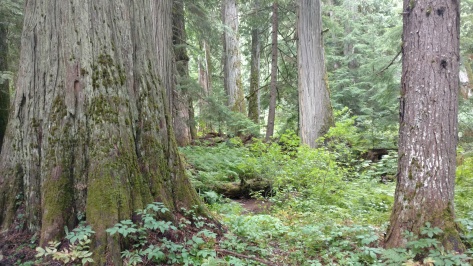 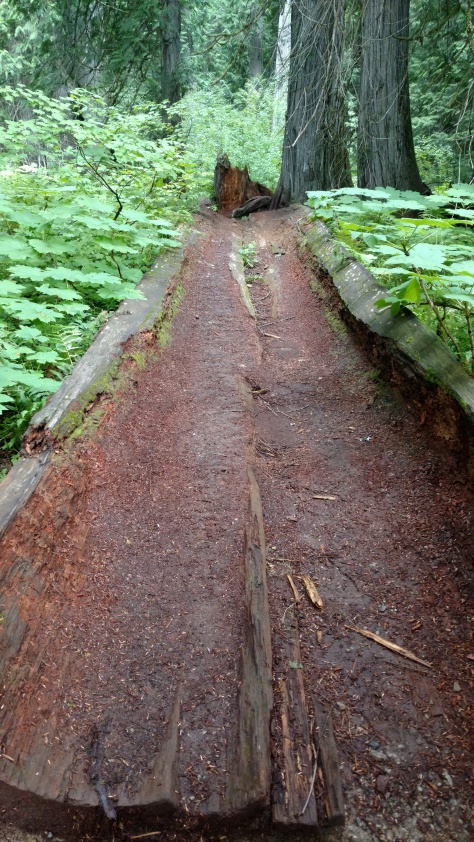 The cedar grove also had a unique cairn garden. The river runs pretty high when the snow melts based on where the displaced trees lie on the banks, but the garden is right in the river bed and even across the logs. It extended over an area much larger than this shot. It was just jaw-dropping to see in the giant cedar grove. I guess folks want to be able to find their way back here in the future.

We then visited the Kootenai Falls along the Kootenay River. The river flows down over these massive, layered rock slabs through the gorge.

The “swinging bridge” that crosses the river really does swing when you walk across it. It’s a cable and wood structure that is probably way too flexible for some folks. It’s limited to 5 people at a time on the bridge and it’s only two planks wide.

We hit Eureka, MT, which is only about 10 miles from the Canadian border and turned south. We stopped in the HA Brewing Co, which is located out in the middle of nowhere. The beer was good and we chatted with a carload of Canadians that were down for a golfing getaway. However, clouds overhead were looking ominous so we took off.

We camped at Dickey Lake for the night. A huge lightning storm was crackling overhead when we arrived. It rained most of the night, and we were glad we had the Roamer to sleep in. In the morning the clouds were blanketing the surrounding mountains.

Given the rainy weather, Glacier NP was relatively quiet when we arrived. Having been there a few times before, we can now skip the main attractions that most folks want to see and instead head for the more remote areas. We headed up the western side of the park, and about 30 miles of dirt (mud) road to one of the remote campsites on Bowman Lake. 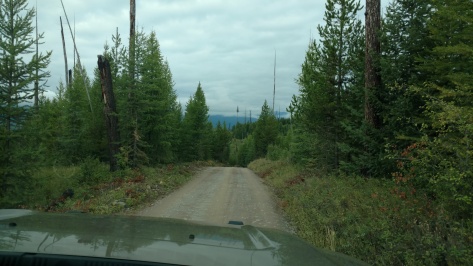 The lake is about 4 times in length of what you can see here as it snakes through the mountains and into the fog. The lake water is crystal clear and while I was fishing with a flannel shirt and jacket there were others swimming in the lake.

The next morning the clouds started to lift to reveal the mountains of the park. It was our first time to Bowman Lake. We’ll have to go back and see it on a clear day. We tried to go there last year, but had to turn around due to a forest fire along the road. 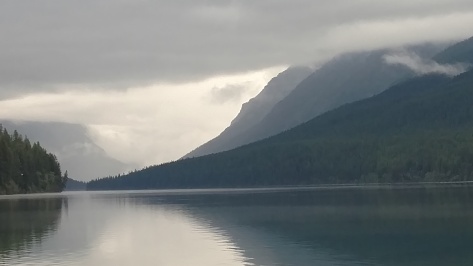 We dropped out of Glacier NP and needed to head back to Missoula for an oil change on the Roamer. We stopped and picked up a Huckleberry pie for Pam’s sister’s family and camped at Placid Lake State Park on the way there. We had plans to stay there last Labor Day, but plans changed. So we figured we’d give it a second try. When we arrived the sign said “campground full”. The camp host said we could look around and we said we were really looking to spend the night. She then surprised us by saying that she had open spots and we lucked out getting one with this beautiful sunset view.

We ended this northwestern loop at Missoula again. This time for truck maintenance, but we spent the night catching up on the Olympics and eating some great grilled burgers and huckleberry pie.