When putting together our treks, there are always a few places that we need to be on a given day that set the overall course of our trip. Filling in the time and distance between those few places and times is the fun part of in traveling. We knew the first leg of the trip would be a southern route to the east coast this year to pass through Tyler, Texas, but getting from there to our next “must stop” in Nova Scotia was wide open.

The Natchez Trace Parkway is one of the gems that you find every so often while traveling. This National Park was started in 1938, with the final sections completed in 2005, creating a 440-mile park that runs from Natchez, MS to Nashville, TN. 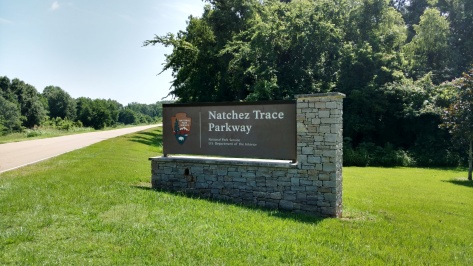 It’s a beautiful two lane road with a speed limit of 50 mph and limited on and off. The added bonus is that it passes by many historical places along the way that are well marked and easy to access.

One of the first stops heading north is Emerald Mound, an eight acre, multi-level plateau built between 1300 and 1600 by the Mississippian Indians for ceremonial purposes.

Another stop is Mount Locust, a stand (aka an inn) built in 1780 along the Trace, the last remaining of roughly 50 stands along the Trace in its day. The Trace started as a series of Indian paths from the salt licks in Tennessee to lower Mississippi. It then turned into a well used trade and travel route between Natchez and Nashville, and points north. 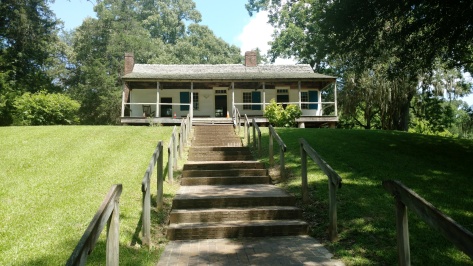 There are sections of the Old Trace that you can hike. Before the steam engine gave boats the power to travel up the mighty Mississippi River, many would build flat boats for their goods, float them down the Mississippi River from the rivers that feed it, sell their goods and the boats for lumber, and then walk back home north along the Trace. The month-long journey was just part of the getting the goods to market.

The signs along the Parkway, denoting another site to see or read about are striking.

The Cypress Swamp was just that. A river had changed course and the old depressed river bed is dry for part of the year, but also creates the beautiful swamp where the cypress trees grow. We didn’t see any gators, but they were there. The sign said to look for logs with nostrils. 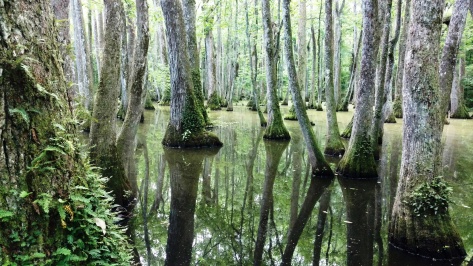 It started to drizzle while we were in the swamp, but turned into a torrential downpour once we hit the road again. There were branches and leaves all over the road, and just a few miles from our campground a tree fell and blocked the road. I jumped out and with the help of a few more that joined me we snapped the tree in half and opened the road. This worked until a larger tree fell and blocked the road about a mile further down the road. Luckily a construction crew from Tupelo was coming the other way with a chain saw and cut the tree. Then several of us rolled it off the highway. 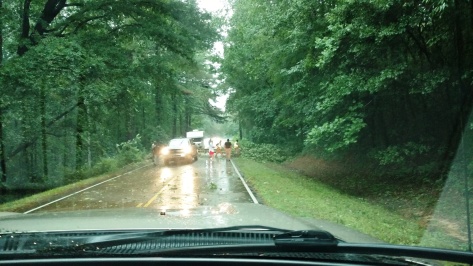 We camped the night at Jeff Busby Park, a beautiful national parks campground right off the Parkway. We were the only ones there! I guess springtime, for the flowers, and fall, for the leaves, are the really busy times along the Parkway.

When we left the campground and got back on the Parkway we were amazed how pristine the road looked, not a leaf or branch anywhere on the road. We asked at the next visitor center and they explained that the crews were out all night cleaning the storm debris off the highway. 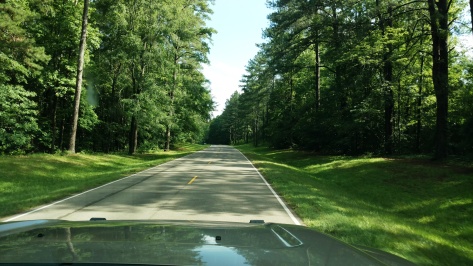 Another stop was the Bynum Mounds, which are burial mounds that date back to around the year 100 BC.

We then crossed the Tennessee-Tombigbee Waterway, a canal that connects the Tennessee River with a shorter path to the Gulf down the Tombigbee River though Mobile, AL. It was first proposed by the French in the mid 1700s. A survey was completed by the US Army Engineers in 1827 but construction did not begin until 1972, and completed in 1985. And we think things go slowly today.

We then crossed the Tennessee River, and neared the completion of our trip on the Trace.

We made a final stop at Rock Springs. It was a nice hike around a spring where beavers had constructed a multi-tiered pond. 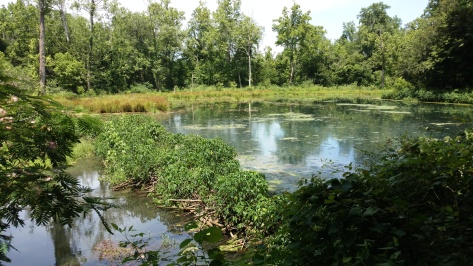 We then left the Parkway to head east, completing over 330 miles of the 440 mile parkway. Even in the humid heat and rainy weather, the Natchez Trace Parkway (National Park) was a beautiful place. We’ll try to get back again in either the spring or fall and see it in a different season.