We left the Natchez Trace Parkway on our way to Great Smoky Mountain National Park, which is situated on the Tennessee – North Carolina Border. That was too much ground to cover in a day so we made a few stops to get there.
First we stopped at Corinth CG in the Bankhead National Forest in northern Alabama. Another beautiful lake was at this campsite, but it was very humid. It seemed all the folks there either had Bama, Auburn or Confederate flags flying at their campsites. We chatted with a few campers, and the accent and candence of speech is so different in the south that we always end up repeating ourselves. We probably come off as very fast-talking outsiders. I guess we need more sweet tea and fried food to help take the edge off – lol.

As we crossed Alabama we saw a sign for the Ave Maria Grotto in Cullman, AL – had to stop. It was the creation of a Benedictine monk, Brother Joseph Zoettl, at the St. Bernard Abby. He created minatures of many of the world’s famous buildings and shrines over a period of decades. This picture captures less than 10% of his creations in the beautiful gardens. 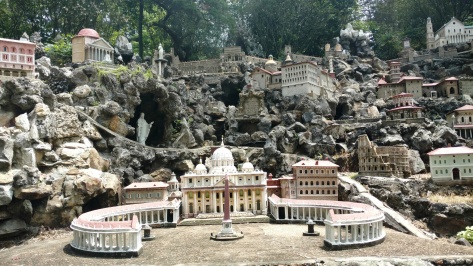 We camped the night at Cloudland Canyon CG in the northwest corner of Georgia. It was up in the hills at about 6,000 feet. Finally some cool air. We had a nice hike while it rained, and the tree canopy was so dense that we barely got wet. 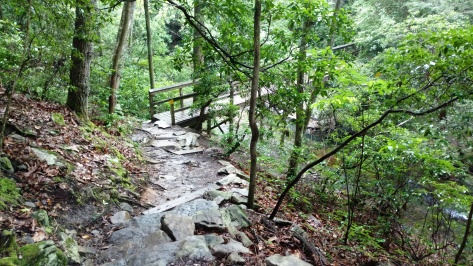 The overlooks at the canyon were impressive. I guess this is what the Grand Canyon would look like if covered with trees. 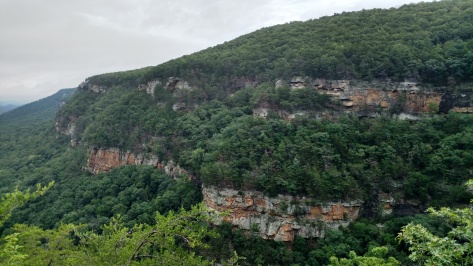 We left Georgia and made our way up into Tennessee. We stopped for lunch at an old mill that is now the town’s park. 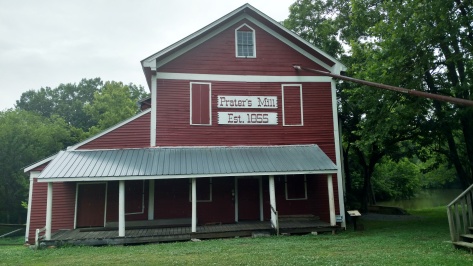 The back mountain road we wanted to take into Smoky Mountain NP prohibited vehicles over 22 feet. We found out later from the Rangers that there is a bridge on the road with a very tight exit turn that has pinned larger vehicles. We drove around through Pigeon Forge, TN instead and were amazed by the tourist business that it pulls in due to the park and Dollywood.

We camped at Elkmont CG in the NP, a crowded campsite, but a necessary evil if you want to be in the park to see the sights. We really enjoyed the fireflies at dusk that luckily outnumbered the people by a significant margin.

The next day we drove to Cades Cove in the park so see the old village there. It too had a mill with a miller grinding corn that you could buy. I was a little disappointed that the blacksmith shop was locked and empty – a possible future position?

The village had several old style barns that offered both storage and shelter, with easy access.

The drive there was on a one-way loop road with many low branches that we tried to miss. I’m sure our new hatch has a few scratches on it now from the roads we have been driving.

We stopped for lunch at a nice stream in the park.

We saw a lot of wild turkeys and black b’ar (bear) while driving around. Over the course of the day I think we counted five bears. Traffic comes to a stop when there is a bear to be seen, and at one stop folks got out to see one over the bank along the road. A mother was hurrying her son along to get there, but he was not happy about stopping – “Maw, it’s probably not a b’ar, just another tu’urkey”. Too cute. 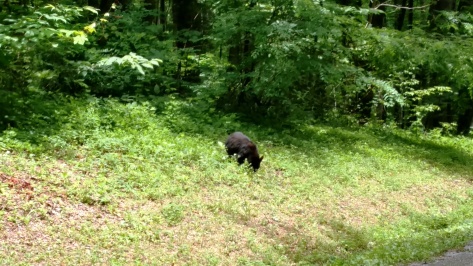 We made our way up to Clingmans Dome (aka Ole Smokey), which sits in the middle of the park right on the Tennessee – North Carolina border. The peak is at 6,644 feet, which you can climb for these lookout shots over the mountains. The Appalachian Trail runs right through this part of the park and right past the peak. 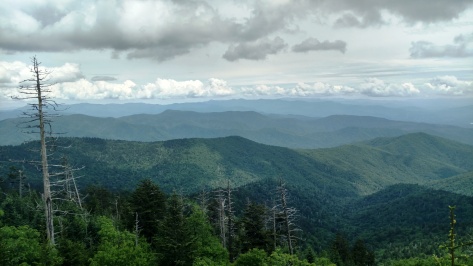 We drove across the entire park the next day on our way out, and onto the southern end of the Blue Ridge Parkway heading north.