Last year was exceptionally bad for truck and camper maintenance issues. This year the only real issue we had was that our camper batteries needed to be replaced. They said we would get 5 to 7 years out of the batteries and they are on year 7 so it was time. We scheduled an appointment at the Earthroamer plant to get new batteries, rotate our tires and get a new roof hatch motor, which was sounding bad and it too usually lasts 5 years.

We stopped in Fort Collins at the Coppersmiths Brewery for another round of beers and a Rueben. Both were very good. The Front Range was in the 90s, which we didn’t expect for September weather, especially after dropping out of the cool mountain air. 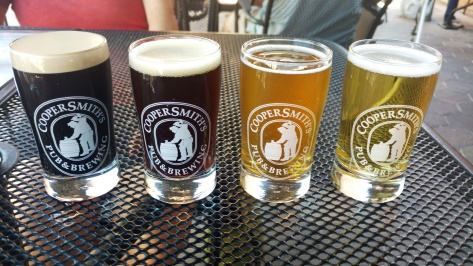 We camped at the Boulder County Fairgrounds the first night. This was quite a change from the quiet campsites we had the previous weeks with the Longmont traffic and trains. Plus, the fairgrounds always has something going on, which is a nice thing.

Our truck took more than a day to finish so we camped the second night at St Vrains State Park. This is a beautiful bird sanctuary very close to the Earthroamer plant, but unfortunately is right next to I-25 so the freeway noise drowns out the birds.

The next day we met up with my cousin Fred, and his wife Cathy who were in Denver visiting Matt, their son. We all went out to lunch at the Bierstadt Brewery and spent the afternoon catching up on family news. We picked up our truck that afternoon and decided to camp at the Fairgrounds again.

They had a Roller Derby tournament ongoing for the weekend at the fairground’s exhibition hall and we watched Denver take on a team from Victoria, Australia. Both were ranked in the world and Victoria edged out Denver in a close game.

The next morning we walked over to the farmer’s market on the fairgrounds and stocked up with some produce before hitting the road west.

We left Longmont and headed over the front range into Rocky Mountain NP. It was a beautiful Saturday and there was a lot of traffic into the park. We were just passing through on our way to northwest Colorado, which is another benefit of the Parks pass – the ability to drive through a beautiful park without paying every time.

Fall colors were out in force along the drive to Steamboat Springs. The aspen along the mountain slopes and cottonwood trees next to the rivers were all golden, reds and orange.

On our way to Streamboat Spring we ran into the Silver Creek Fire, a lightning started fire which has burnt over 12,000 acres and is still uncontained.

Our original intent was to head to Dinosaur NM and camp there, but Pam found Juniper Hot Springs off the beaten track just outside Craig, CO. We camped there the night and enjoyed soaking in the funky pools that night and the next morning. While the pools looked black the water was actually crystal clear. 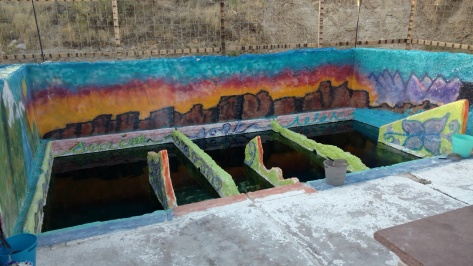 We were greeted to gorgeous sunrise the next morning before our soak in the hot springs.

We packed up and headed south to visit with some friends in Fruita, CO.