Owning an Earthroamer is a joy and takes us on great adventures, but occasionally you need to deal with the frustration of a mechanical issue. On the last leg of our summer trip the front passenger shock attach-bolt broke and departed the rig, leaving the front shock dangling from its upper mount. We were alerted to the problem by the loud squeaking noise…. we sounded like a wounded whale. A quick call to the ER service rep and we had a plan for the repair.

Earthroamer has an outstanding customer support team, headed up by Spencer, and they will either talk you through the fix (if you want to tackle it yourself), or help you find a local repair shop and coordinate details so the process goes smoothly. Spencer tied us up with Sierra Expeditions in Mesa, AZ. Will and his guys at Sierra had helped us out before replacing a broken winch gear, so we were confident they could handle our broken shock. Seeing that our rig has nearly 90,000 miles now we decided to rebuild all the shocks, getting new shims and some spares for future failures that might occur away from civilization. In the process of our shock overhaul we found a crack in the frame that would have been a huge issue in the future, but it had just started so we caught it in time. His guys welded the crack, rebuilt the shocks and Pam and I were itchin’ to travel again.

Our friends, Clark and Jill had just purchased a Sprinter van to start their backroads exploration, so we decided on a nice extended weekend trip to southeast Arizona. We met up at Whitewater Draw, south of Elfrida, AZ to check out the birds. 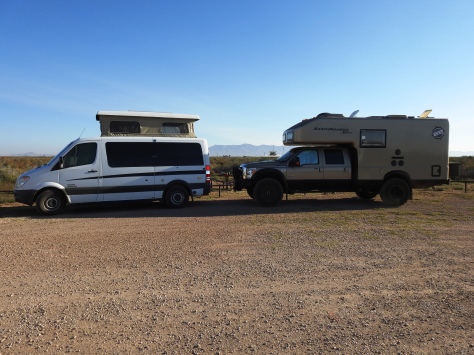 Whitewater Draw is the winter home to thousands of sandhill cranes. The bird habitat is tucked in between thousands of acres of corn fields that the birds visit daily. Only a few hundred cranes were at the Draw this early in the winter migration, but there are always interesting raptors and other water birds. Camping at WWD is free, which is always a bonus. 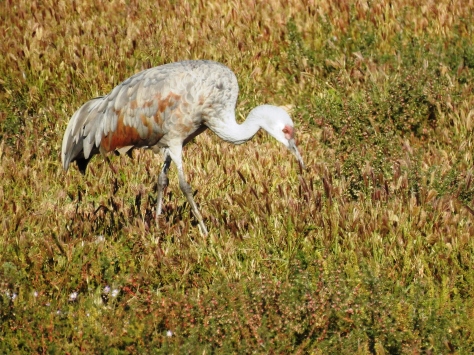 There were a host of other birds also there in the ponds and grasses. 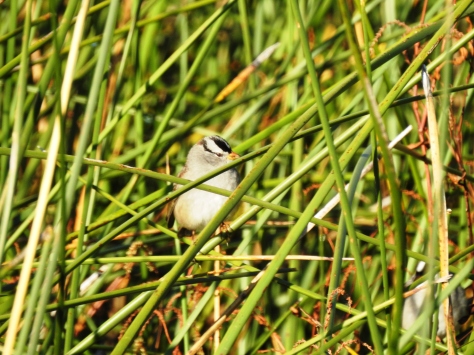 A Northern Harrier Hawk was also sunning himself in the fields. 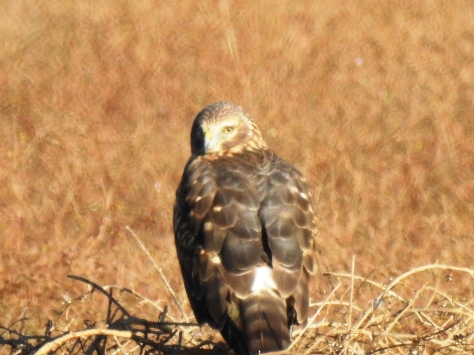 The hay barn at the Draw has a bat house that exploded with hundreds of bats at sunset. While the white-nose virus that killed thousands of bats across the country is still an issue, we’ve seen bats nearly ever evening camping, which is a great thing since they do an incredible job keeping the mosquito and other insect populations in check. Plus, they are pretty cool when they swoop in and out of the glow of the campfire.

The next day we drove into Chiricahua National Monument to hike the trails. The rock formations at Chiricahua are spectacular and provide a beautiful backdrop for a very enjoyable hike. 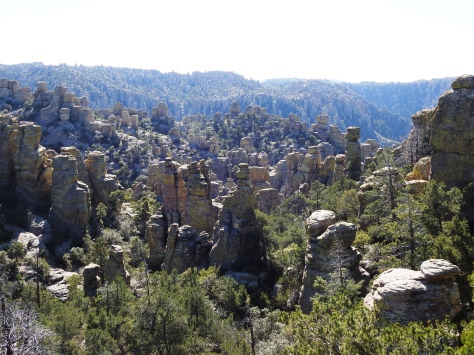 We did one of the shorter loops, only about 4 miles, that wraps in and through the rocks. 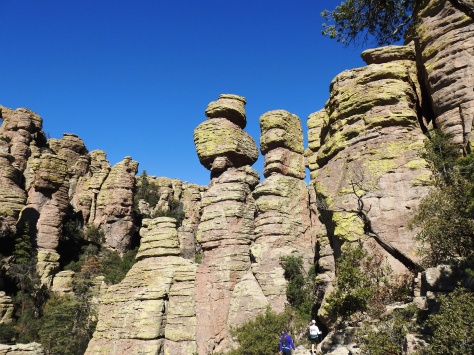 It was a beautiful day and the views were gorgeous. 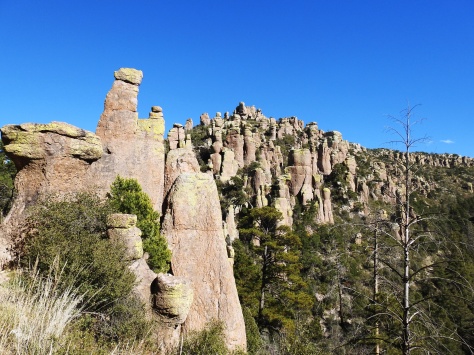 We had lunch at the visitor center and were greeted by the local Arizona white tail deer. They are a very small deer, only about 100 pounds or less, but their huge ears make them a joy to see. 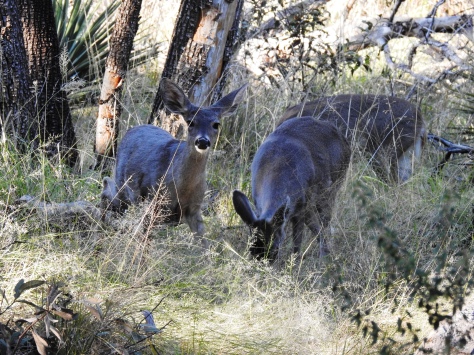 We camped the night in the forest off Pinery Canyon Road. We cooked up a nice dinner and had smores over the fire for dessert. Who said kids have to be present to enjoy smores? 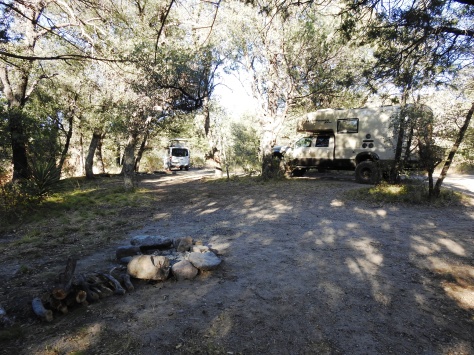 The next morning we explored the wine region that is booming south of Wilcox, AZ. We caught a few hundred Sandhill Cranes in the air making their way to a local field for breakfast. We headed instead to the Zarpara Vineyard for some wine tasting, which was very good. 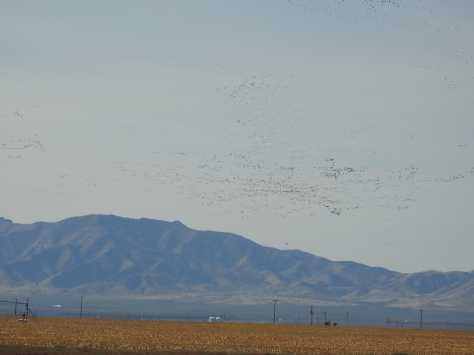 We then took off to the north side of the mountain range to hike to Ft Bowie National Monument. It’s one of the few National Monuments where you park on a dirt road and hike in about 1.5 miles to get to the place. It used to be along the stage coach trail between El Paso and Tucson due to the spring near the Fort, but now no roads run next to the place. It was also the command center for the Indian Wars that took place in the area against the Apache Indians following the Civil War. 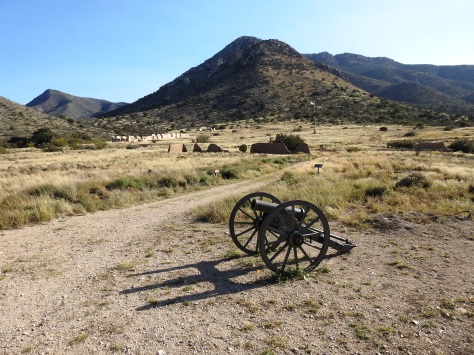 After our hike back out we were parched so we made our way to another of the local wineries, Bodega Pierce Vineyards. We caught the tail end of a wine tasting event and ended up closing the place after tasting many good wines while discussing cooking, politics, grapes and life.
As the sun set we made our way to CattleRest RV Park & Saloon just outside Wilcox. The saloon did not serve food so we cooked up dinner in the parking lot and enjoyed great burgers while Clark and Jill attempted to teach us Pinochle. We made our way back home the next morning. 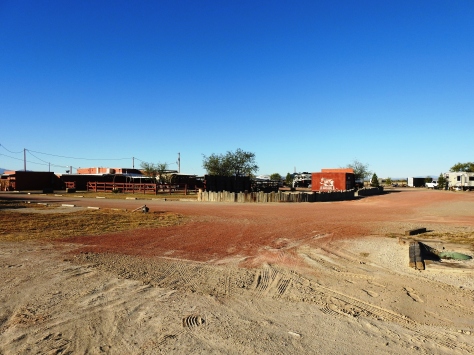 Another great trip to southeast Arizona and hopefully the first of many with Clark and Jill.