The first wintery weather of the year was not done yet. When we awoke in Craters of the Moon campground the next day there was snow coming down. The Roamer has a nice diesel heater and the camper is well insulated. We typically have the heater turned just barely on and even open the ceiling vent for fresh cold air. The diesel water heater does a heat exchange with the engine coolant lines so it pre-heats the engine block for easier starts in really cold conditions. 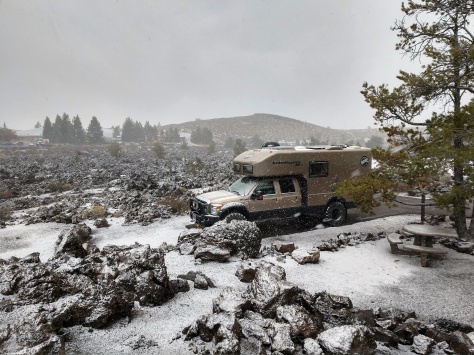 It looked interesting having snow on volcanic rock. 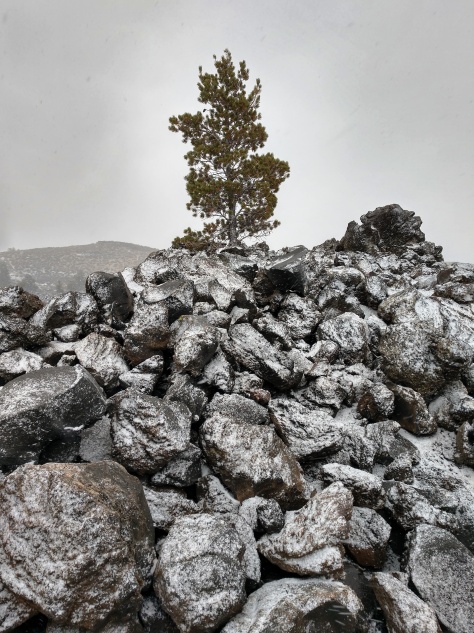 The sun then poked out for a few minutes and the snow all disappeared. Craters of the Moon is a beautiful place when you see the variety of rock formations and realize too that its relatively new earth. 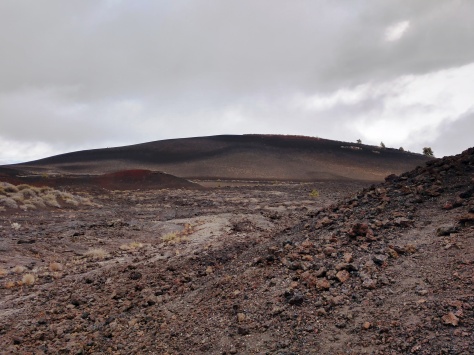 They have determined that the line of volcanic cones across the landscape have erupted every 2,000 years – although they didn’t say when the last eruption occurred…. 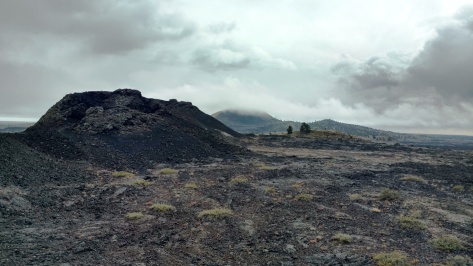 This game trail cut a clean line through the spare ground vegetation trying to take hold on the volcanic cinder surface. 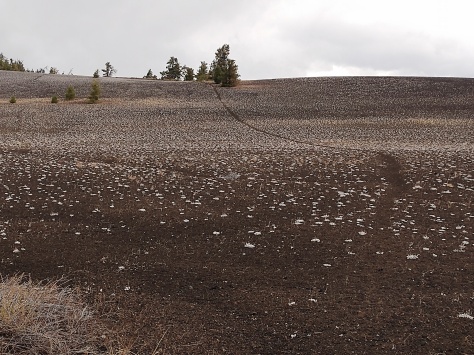 There were a lot of character-filled dead trees around the park. At one point in the history of the park the superintendent thought these to be an invasive species and had them poisoned. Turns out they are not invasive, just stubbornly persistent. 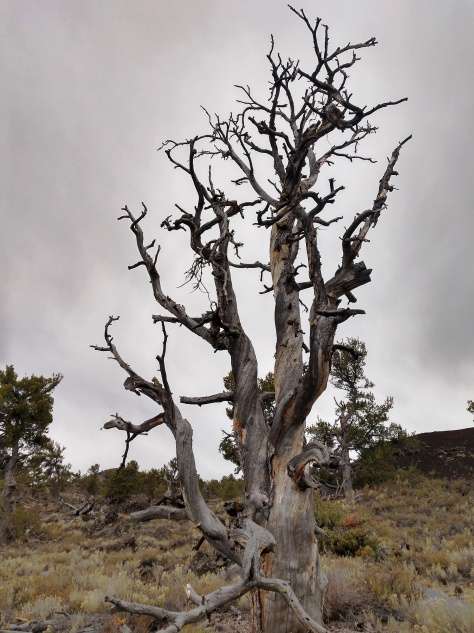 We did several short hikes around the park, warming up in the Roamer between hikes. I grilled up some awesome burgers outside as the temperature dropped into the low teens that night.

The next morning there were frozen condensation crystals everywhere. 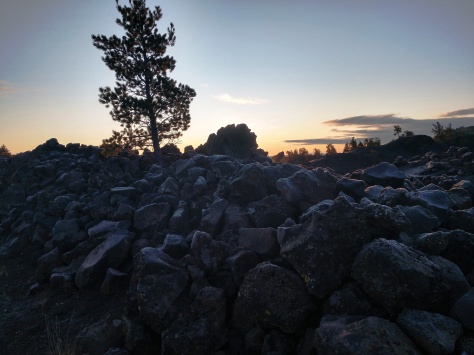 The crystal-covered top of the picnic table looked rather interesting. 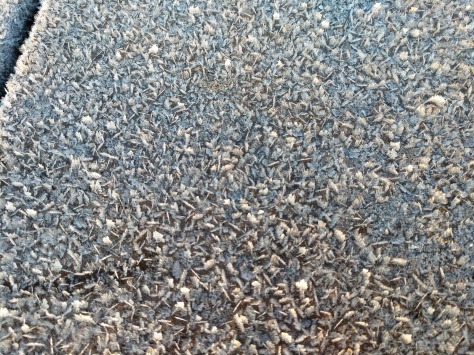 We packed up and headed southeast towards the Idaho – Utah – Wyoming border junction. The southeast section of Idaho is potato country. We saw that Blackfoot, ID had the Potato Museum so we had to stop.

There was a lot of interesting information on potatoes and the history of the crop in the area. The café in the museum had everything potato, including ice cream. Pam and I both got a nice bowl of potato soup and I had to get an order of fries just to try them. They were huge cut fries cooked to perfection.

Every small museum is going to have something quirky. One of the displays was a Boy Scout project of many potato mashers. 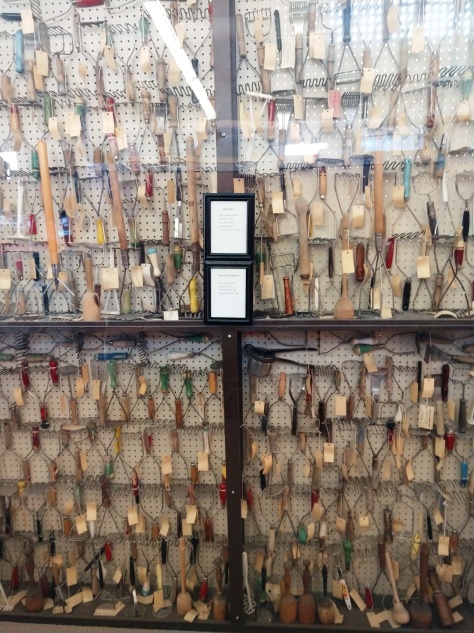 And what would a potato museum be without a display case of Mr. and Mrs. Potatohead. 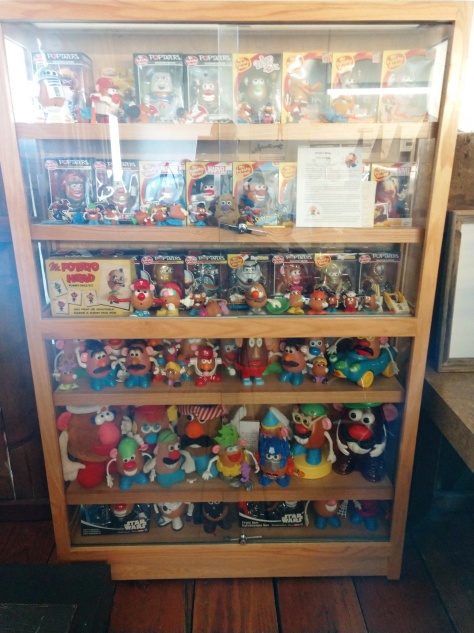 While in Missoula, Pam and Leslie were discussing possible family reunion sites. Past sites included two winter ski reunions in Big Sky, MT and Sundance, UT, and a summer lake site in Sandpoint, ID. A possible future summer option was Bear Lake that sits on the Idaho – Utah border. We decided to scout it out on our way home.

The first night we camped at Bear Lake State Park in Idaho on the east side of the 5-mile by 15-mile lake. I always chuckle when we camp in Idaho’s state parks because the price is always weird. This time the cost was $29.38. Seriously? We dropped in a check this time, but the last time we stayed in an Idaho state park we put so much change in the envelope that it barely fit into the pay slot – lol. I’m not sure you can come up with a value that requires more different bills and coins than $29.38 that is under $30. The next price increase will probably change it to $36.41, which requires every bill $20 and under and every coin 25 cents and under. 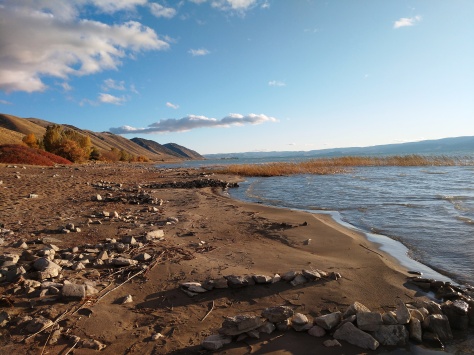 Although it may look warm in the photos, it never got above freezing the entire time we camped there. There was a nice stiff wind too just to ensure you didn’t forget it was cold.

When we arrived and picked a spot one other camper was in the campground. I had a sweatshirt and a couple of long-sleeved shirts to provide layered warmth as I set up our site. The owner of the other camper came over to talk with me dress in an arctic jacket, winter gloves and knit cap. It made sense when he said he was from Southern California and had never been somewhere so cold. He wanted to let me know that the water in the campground was off. As it turned out Pam spotted a dump and water station in one of the small towns we drove through to get here and had just topped off. He told me about the conversation he had with his 5th wheel maker to ensure the heaters would keep anything from freezing. I thought if I offered him a beer he couldn’t have held it with those gloves or even bent his arm enough to drink it since he looked like the Michelin Man in his jacket.

One of our recent purchases for the Roamer was an inductive cooktop surface. Since we had power at the site, just not water, I used it to cook up some pasta for dinner with some of my homemade sauce. It was a nice warm meal for the night. Although, I think our pot holders may have blown off the picnic table while I was cooking and are now a donated item to the Idaho State Park. I guess they were worth about $29.38.

The next morning there was a fog layer lifting off the shallow side of the lake that looked really beautiful. 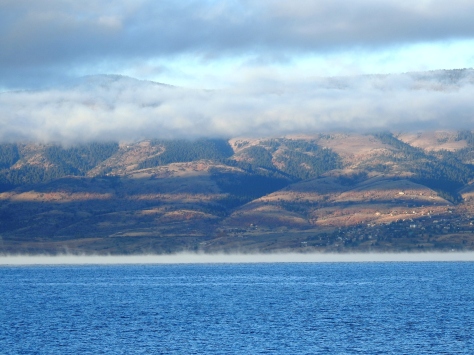 The Southern California folks were gone early the next morning, possible heading south. Pam and I drove just over the Wyoming border to one of our favorite places, Fossil Butte National Monument. The fossils they have displayed in the visitor center are amazing. Below is a shot of plant life they uncovered from the lakebed. 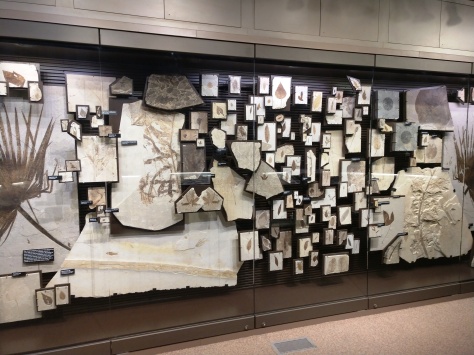 Some of the fossils are huge palm fronds or large reptiles, while others are small seeds and dragonflies. 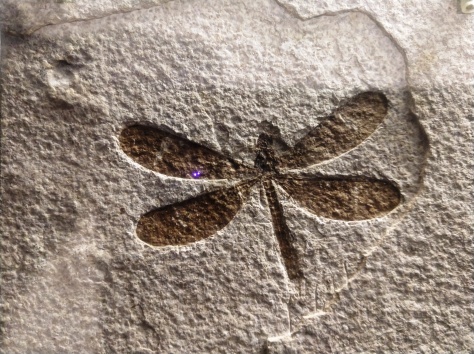 While you can’t dig up anything within the park, there are a few folks that will let you dig on their sites outside of the park. It was late in the year and cold, but our guide agreed to take us out and see what we could find. The fossil beds are just hundreds of layers of rock that can be separated to see if something is preserved in the layer. 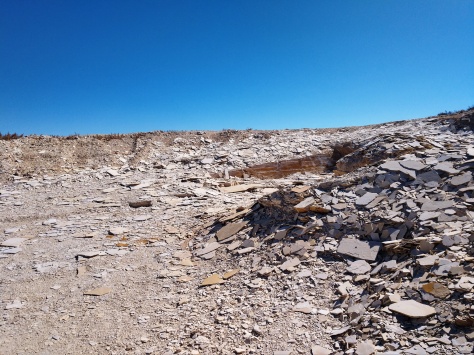 You jam thin steel bars into the layer gaps and pop a layer up. Most of the time there is nothing or fossilized fish poo. But sometimes you get a nice fish fossil or plant. We spent a couple of hours up there and collected about 10 fossils that I now need to cut and mount. 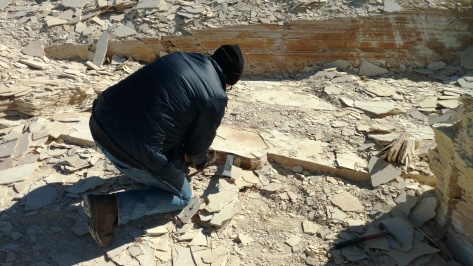 This is what a fossil looks like when its uncovered in the famous 18-inch fossil layer, the layer where all the museum-quality fossils can be found. 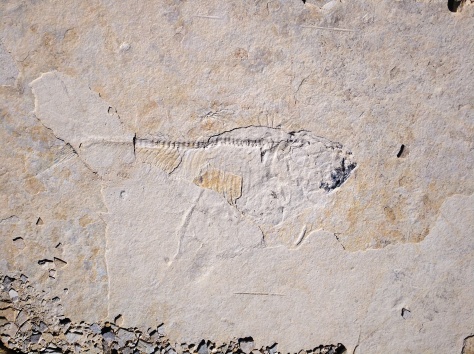 They will cut these out and slowly remove the thin layer of rock that covers the fossil until it looks like the ones displayed in the visitor center shown below. Very cool. I now have my own carbide tip tool to work off the thin layer of rock. A successful fossil hunt and a new tool – some days are just better than others. 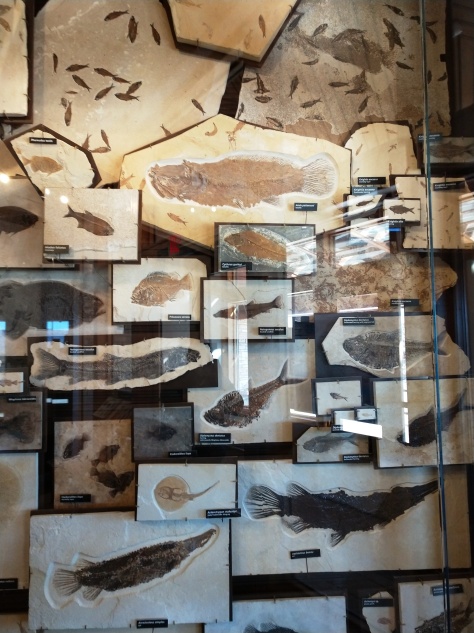 That afternoon we drove back to Bear Lake and camped in Utah on the south side of the lake. It’s a beautiful lake, but after talking with a few locals we’re not sure it would be a good place for a reunion. Water access is marginal unless you are right on the lake, and it’s a busy, noisy lake in the summer. 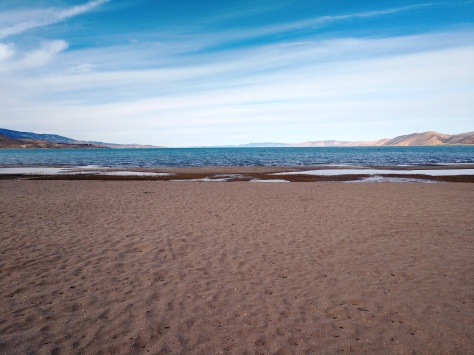