We arrived at Leslie (Pam’s sister) and Klaus’ house in Missoula, MT. They are empty nesters now, with the youngest of their three kids in his sophomore year at Montana State. They live in the foothills looking down into the Missoula valley. They have a nice walk path around their neighborhood, and it not unusual to see deer and the occasional black bear in the hills around their place.

The population in the area is growing so there is always new places to eat and breweries to try when we visit. Leslie took us to a farm to table restaurant called “roosterloo” that served really good food. 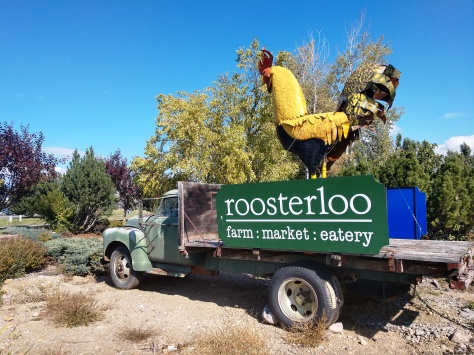 Leslie gave Pam a belated birthday present of a variety of hummingbird decorated items. I got a pre-birthday present of a book titled, “Eager – The surprising, Secret Life of Beavers and Why They Matter” by Ben Goldfarb. I’ve finished the book now and highly recommend it to anyone who wants to understand what is going on now, and mostly in the last couple of decades, to reintroduce the beaver worldwide. I’ve always been what is known as a Beaver Believer in the rodent’s ability to fix many of the environmental issues we hear about daily. Like the wolf and salmon, the beaver is one of the few keystone species that positively impacts everything around them in an ecosystem.

Pam, Klaus and I went to a Beaver talk at the Great Burn Brewery hosted by the Clark Fork River Coalition on how they are dealing with the re-introduction of beavers into the Clark Fork River watershed and the beaver – human conflicts that arise. Good beer and an interesting topic, what’s not to like?

Klaus left on a business trip to Germany while we were there. Leslie took advantage of his absence to re-arrange and optimize their garage storage capability. For me it involved a drill, stud finder, many hooks, new shelves and a couple of loads to Goodwill – lol.

Just before we left Missoula, we got to visit with our niece, Stephanie, who was returning from shooting one of the gold prospecting reality shows as a production assistant. Oh, to be twenty-something again.

We left Missoula, heading home, and camped at a new spot that Leslie and Klaus had been to this summer, Lost Creek State Park. It was also one of the beaver re-introduction / conflict sites from the talk. The park was in a beautiful canyon just outside Anaconda, MT.

Due to the near freezing weather we ended up having the entire place to ourselves.

The park had a waterfall that dropped down into the canyon.

There were several terraced beaver ponds within the park. The conflict was when one of the beaver ponds became too big and flooded the dirt road leading to the campsites. The solution was a device similar to the “Beaver Deceiver”, originally developed by Skip Lisle in Vermont. The device provides the pond with water leveler hardware that keeps the water level below a set height and the road dry. It frustrates the beavers for a few days, but then they adapt.

You can almost make out the mud-covered beaver den in the middle of the picture between the two large boulders. Beavers are nocturnal creatures, so we never caught a glimpse of the hydro-engineers.

There was no wind in the canyon, so the surfaces of the beaver pools were glass smooth, producing an interesting picture of the reflected canyon wall.

We re-stocked our food supplies for the trek home while in Missoula. Because we spend a significant amount of time on the road, we eat a better diet than weekend “camping” food. For our first night back on the road we did splurge and had some “surf and turf” cooked over coals. 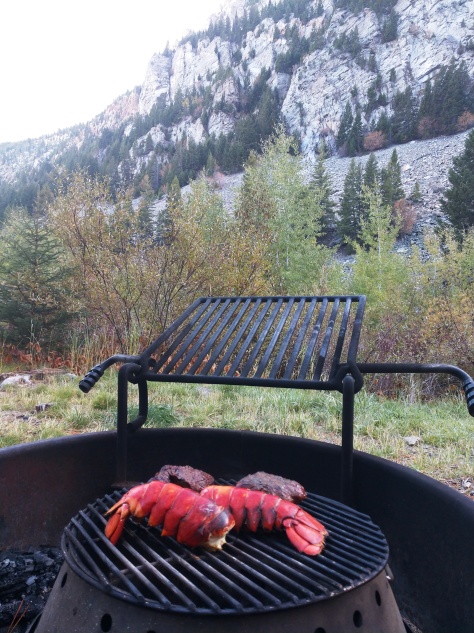 The next day we said goodbye to the beavers and continued south. We stopped at Big Hole National Battlefield where in 1877 US troops conducted a pre-dawn attack on a Nez Perce village, killing many men, woman and children. The Nez Perce would not sign a treaty and move to a reservation, so the US Army pushed them out of their lands which started the 126-day flight towards Canada. The Nez Perce fled the Idaho Territory into the Montana Territory and therefore thought themselves safe from the US Army.

Caught by the surprise attack, the Nez Perce warriors eventually regrouped, captured the Army’s howitzer and pinned down the rest of the US Army while the remaining healthy and wounded Nez Perce village packed up and fled. They were eventually defeated near the Canadian border. One US General stated that they needed to make an example of the Nez Perce otherwise other tribes would follow their defiance. It was a solemn place.

We jumped over Chief Joseph Pass at the Montana – Idaho border and continued down the Salmon River valley. We turned south into the Lemhi River valley with the beautiful, snow-covered Lemhi and Lost River Ranges on either side.

We arrived at Craters of the Moon National Monument and easily found a camping spot due to the now sub-freezing temperatures. It’s a first-come, first-served campground for $8 a night in a truly beautiful place. I guess the sub-freezing weather kept many campers away. Lucky for us.